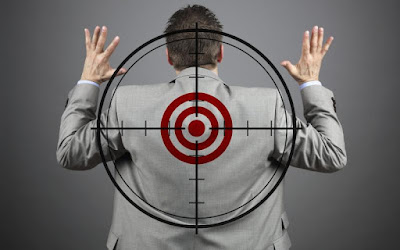 Examples discussed below include a recent Intercept “deceptive hit piece” which against two conservative reporters, as  radical left-wing reporters, such as GQ’s Julia Ioffe are saying that Fox News doesn’t deserve the constitutional right of freedom of the press or free speech afforded under the First Amendment.

New York Times is also publishing hit pieces about Project Veritas, and CNN pundits are obsessed with Fox News, whether from jealously because CNN’s numbers are tanking and Fox remains number one in the ratings, doesn’t matter.

The constant attacks against Independent and conservative media have reached a tipping point when liberal outlets are willing to put conservative writers into mortal danger for doing nothing more than reporting on Antifa/BLM riots, as the Intercept did.

The Intercept website landed itself in hot water earlier this week after running a hit-piece that effectively put dangerous targets on the backs of conservative field reporters who have covered the Antifa/Black Lives Matter-led riots up close and personal over the last year.

“Journalist” Robert Mackey, a senior reporter for the Intercept whose resume includes prior reporting for the New York Times (surprise), and his colleague Travis Mannon proudly promoted the link numerous times on their respective Twitter feeds and retweeted the scant praise they received from supporters like has-been comedian Tom Arnold.

But it was Mackey’s tweets that got ratioed big time as other media figures on both sides of the aisle and their Twitter followers blasted The Intercept for further endangering the lives of these on-the-ground reporters over the “crime” of often reporting on the side of these “peaceful protests” that the mainstream media doesn’t want you to see.

The reporters targeted by the Intercept were field/riot reporters for Daily Caller, Townhall.com, and The Blaze as well as some other independent journalists in a video approximately 25 minutes long, promoted with the message: “Meet the Riot Squad: Right-Wing Reporters Whose Viral Videos Are Used to Smear BLM.”

Liberal journalist Glenn Greenwald, who co-founded the Intercept but resigned after his own work reporting on Joe Biden and “revealed emails and witness testimony [and] raised critical questions about Biden’s conduct,” was censored just six days before the 2020 presidential election, had some brutally sharp criticisms for the outlet that he co-founded built on his name recognition, reputation and hard work.

Greenwald took to social media in a series of tweets to blast the Intercept:

• The Intercept is now actively targeting two journalists of color. They have two white male reporters here putting a target on their backs for the crime of reporting on Antifa riots. This is genuinely disgusting and dangerous. Press freedom groups should condemn this.

• This is on top of what The Intercept has @micahflee doing: trolling through private personal data for Gab users to dox them, as @mtaibbi reported. Do you see who their targets are? Private citizens with the wrong ideology. That’s FBI work, not journalism.

• Journalists have been repeatedly assaulted while covering Antifa protests. Antifa threatens journalists, breaks their cameras, and attacks them violently. The Intercept knows this. They’re showing Antifa which 2 journalists they should look out for. That’s what this is for.

• The most hilarious part of this disgusting Intercept video trying to put targets on the backs of reporters who cover Antifa protests is that @RobertMackey tried to depict himself as some battle-hardened reporter because he “live-blogged” the Arab Spring from his couch.

Andy Ngo, an Independent journalist who has documented Antifa’s antics in Portland, and who was hospitalized with a brain bleed after Antifa thugs brutally attacked him, added his reaction to the targeting of these journalists.

• As someone who nearly died as a result of being beaten on the head for my video coverage of riots, I cannot overstate how much more you’re endangering these reporters in your hit piece. @spj_tweets & @pressfreedom need to condemn this anti-press freedom propaganda.

More reactions can be found at Legal Insurrection.

The editorial board at The Daily Caller put out a public response to the Intercept’s hit job on their reporters, which can be found here.

To show how hard liberals are trying to prevent any news that isn’t “liberally approved” from being distributed to the public, we note the attacks against Fox News have kicked into high gear. 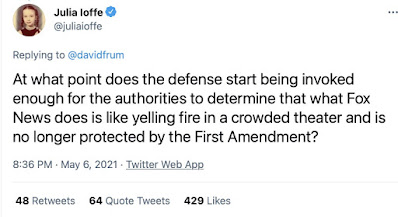 Liberals may not like this, but we can share differing opinions. We can mock liberalism. We can hate Joe Biden. And if that makes you mad, well, that’s your problem. Therefore, liberals can never re-direct the ‘snowflake’ attack on us. Conservatives get upset about liberal attacks on our history, free speech, and other constitutional rights that progressives want to shred—and need to shred—in their efforts to install the hyper-regulatory and authoritarian regime they want; the Constitution be damned. That is not the same thing as getting worked up over…white people selling empanadas out of a food truck. That’s not a constitutional crisis. Muzzling the press in order to enhance the liberal echo chamber is on the other hand.

I am not exactly a Fox News fan, but just because I disagree with the way they handled the 2020 election campaign cycle, doesn’t mean they are not protected by the same constitutional rights as any other outlet.

I despise CNN and their arrogant, holier-than-thou pundits and reporters, yet I wouldn’t suggest stripping them of their freedom of press rights.

Brian Stelter is a great example of this type of hypocrisy and double standard as he has been fighting his own little war against Fox News for a long time.

Some of the most recent attacks are seen in the headlines below: