This week, gold convincingly challenged and overcame the $1800 level and silver shot through the $27 barrier. From last Friday’s close, gold rose by $51 to trade at $1820 in European morning trade, while silver rose $1.40 to $27.30 on the same time scale. Open interest on Comex yesterday jumped by 22,866 contracts in gold, and by 11,160 in silver — magnitudes rarely seen.

There is no apparent reason for this development. But in silver, over 40 million ounces of physical metal have been withdrawn from Comex vaults this week, putting the squeeze on the bullion banks which are short.

The table below shows the changes in the positions of the Commitment of Traders categories since the silver price bottomed at $24 on 30 March. 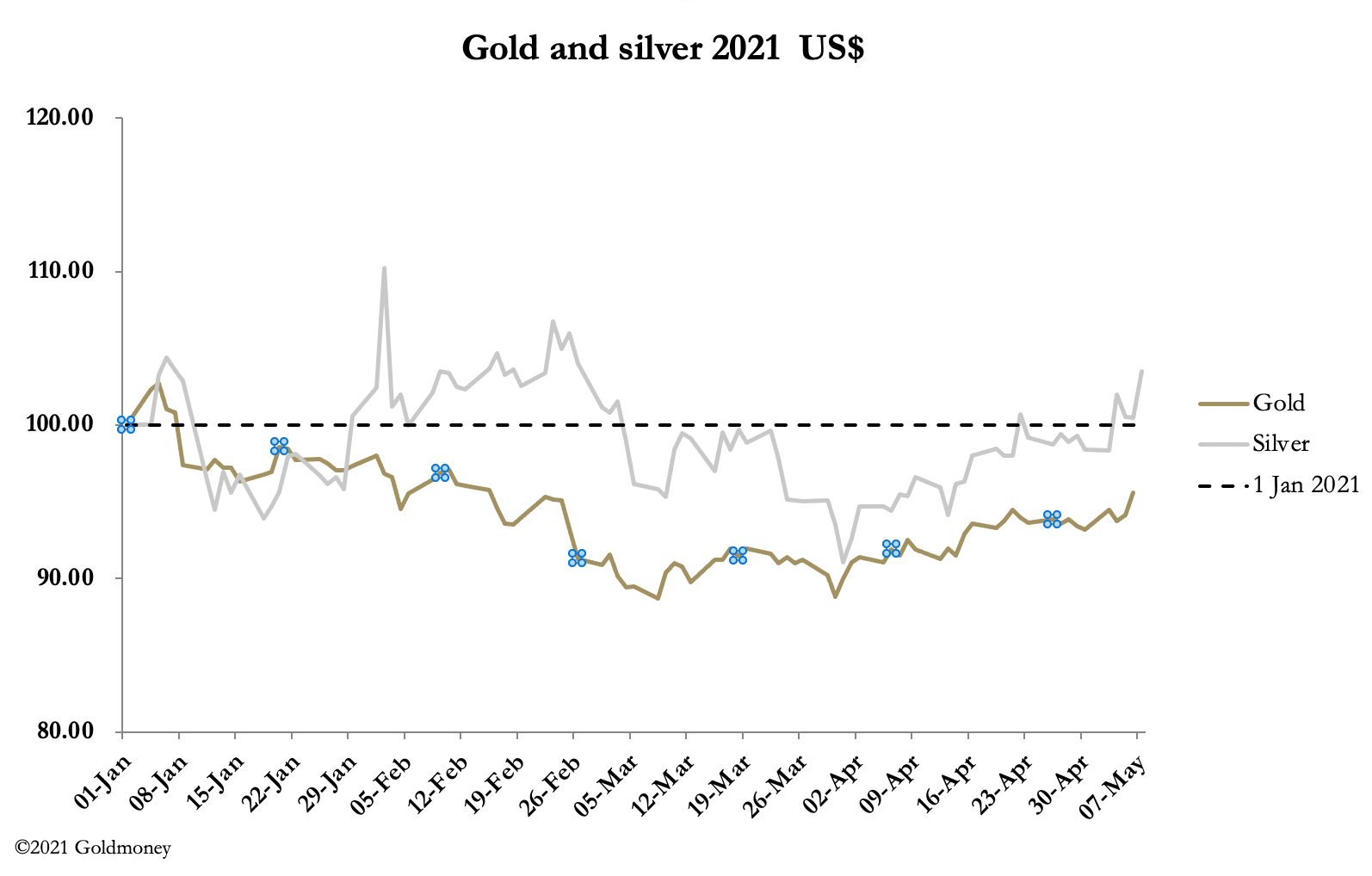 Unlike the gold contract, over half the short position is in the Producer/Merchants category. This is to be expected because mine production of silver as a by-product of lead-zinc, gold and copper mines accounted for 73% of total mine output in covid-stricken 2020. These mines are more likely to hedge their production than a pure silver mine, and Comex shorts in this category are the equivalent of 38.4% of total mine output, according to the last report issued by the Silver Institute.

Nonetheless, the Swaps (bullion bank trading desks) are net short 60 million ounces in an illiquid market. The larger bullion banks can cover their positions relatively easily through over-the-counter contracts with major mines. It is the smaller bullion bank traders without those industry connections that are most vulnerable to rising silver prices, and they are likely to try to keep an even book.

Gold is different, with the bullion bank traders having 70% of the total shorts, and Producers/Merchants the other 30%. This is reflected in a substantial bet by the bullion bank cohort against a rise in the gold price, the subject of our next chart. 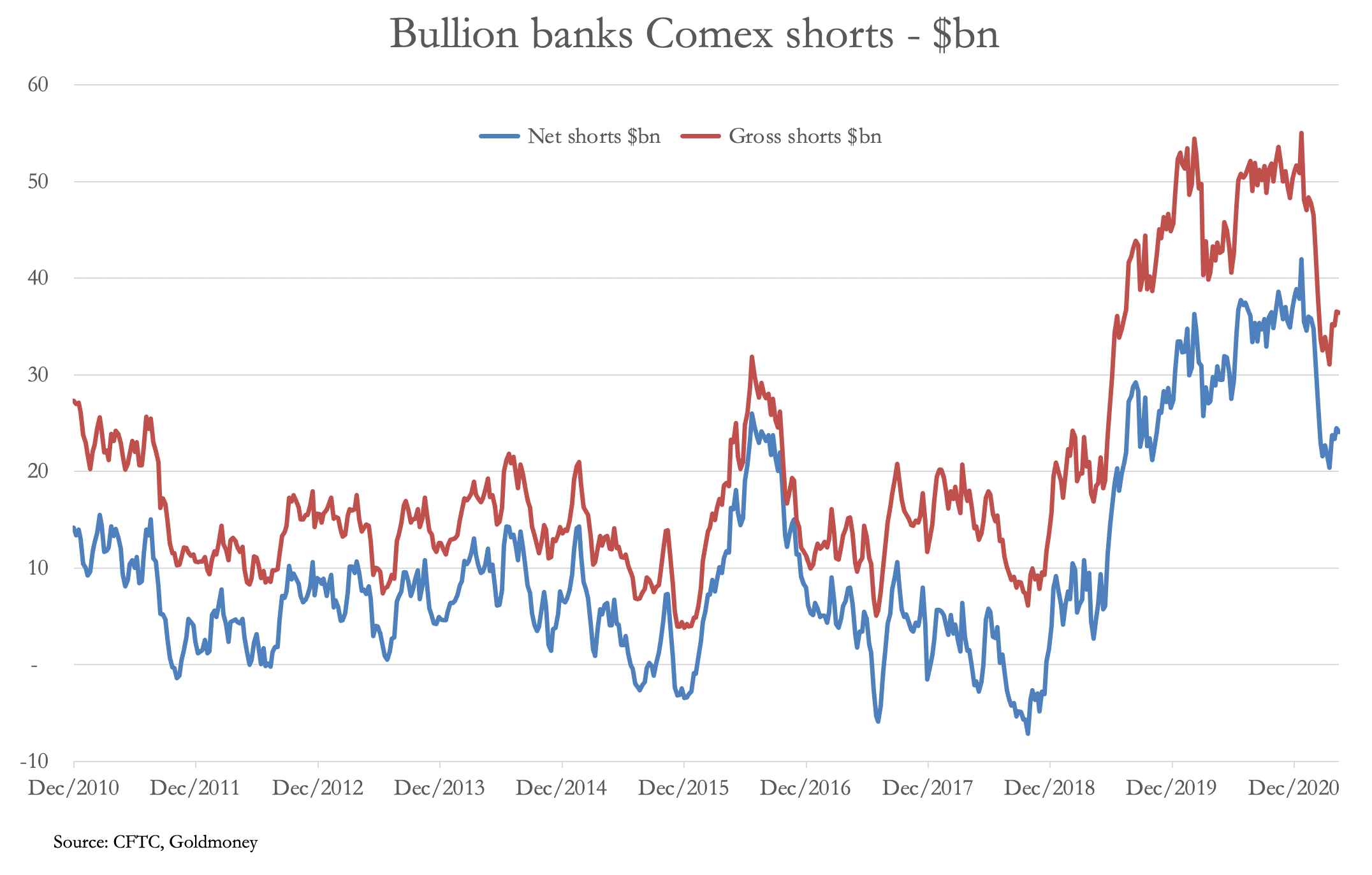 Bullion banks on Comex are less exposed than they have been recently, but they have been unable to reduce their positions to historically normal levels. Of course, this is only part of the overall picture, because normally Comex shorts hedge long bullion positions in the London forward market. But the rising popularity of physical ETFs, Asian and central bank demand, plus the accumulation of private ownership of vaulted bars has led to a decline in physical liquidity, despite the LBMA reporting increasing bullion stored in London vaults.

For different reasons, both gold and silver are vulnerable to bear squeezes against the establishment. And in gold’s case, since the “Powel Shock” of 23 March 2020 its price has only risen by 25%, which is considerably less than the commodity complex as a whole, for which our last chart is an effective proxy. 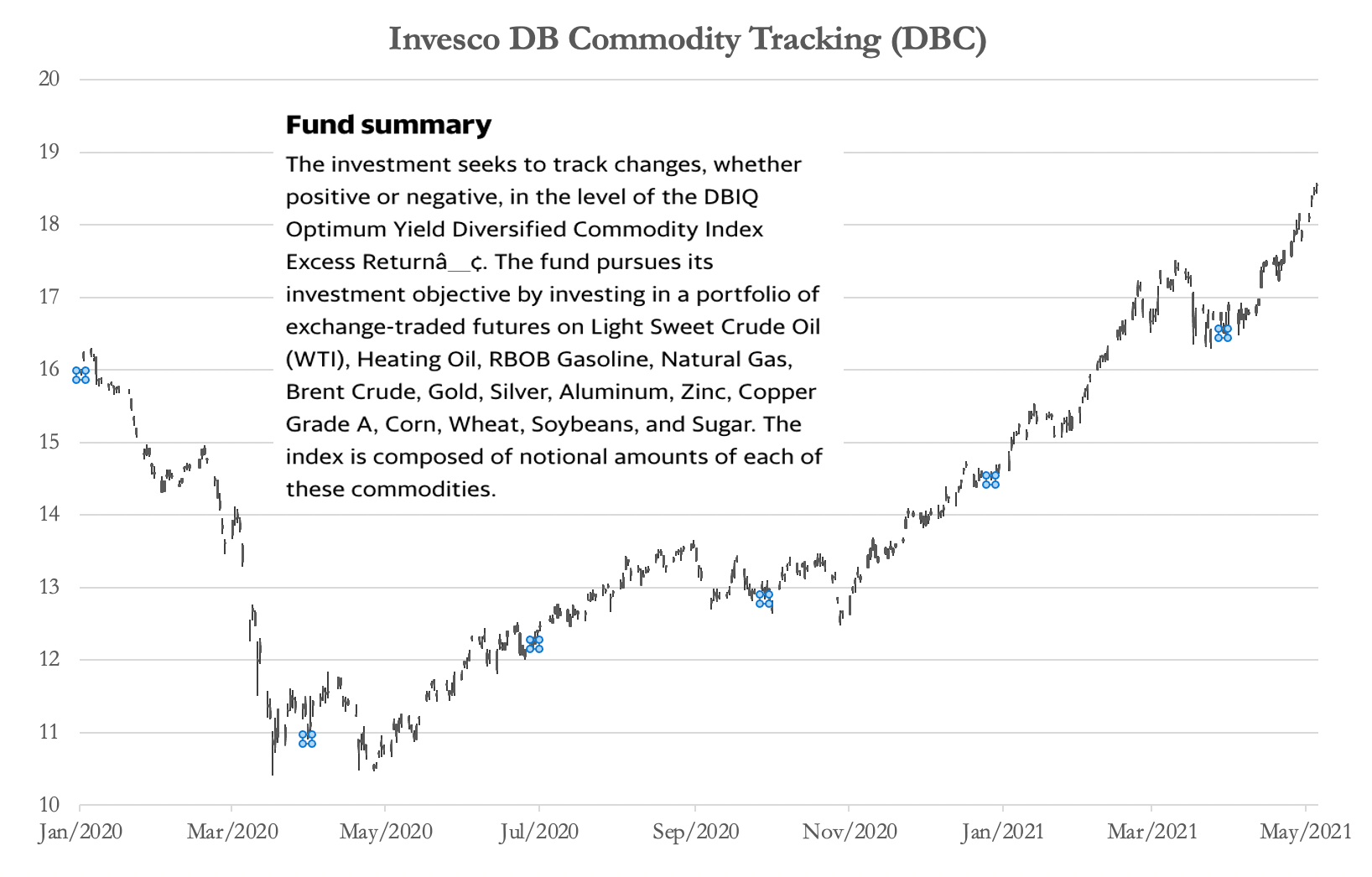 With a representative basket of commodities rising 80%, gold has dramatically underperformed, undoubtedly due to bullion banks’ interests in suppressing the price. But, as everyone should know, the markets win out in the end, and perhaps this week is the beginning of them taking back control.