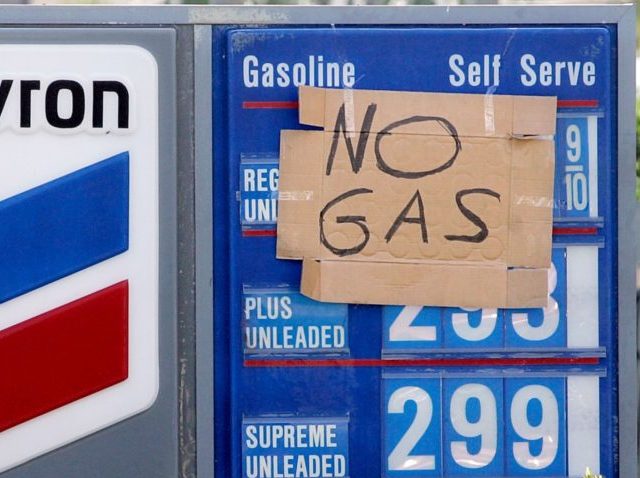 Demand for gasoline soared Monday as the shutdown of the Colonial Pipeline sent Americans to the pumps.

Gas demand on the east coast of the U.S. rose 32.5 percent compared with the prior Monday, GasBuddy petroleum analyst Patrick De Haan tweeted on Tuesday.

PADD is short for Petroleum Administration for Defense Districts, a designation created during World War II to allow the government to allocate petroleum distribution. PADD 1 is the East Coast, PADD 2 is the Midwest, PADD 3 is the Gulf Coast, PADD 4 is the Rocky Mountains, and PADD 5 is the West Coast.

In addition, many areas around the country are experiencing gasoline outages, De Haan tweeted. The largest outage on Tuesday was in Virginia.

“On the week, the national gas price average jumped six cents to $2.96. If the trend continues, an increase of three more cents would make the national average the most expensive since November 2014 –the last time we saw average prices at $2.99 and higher,” AAA reported.

AAA forecasts gas prices to climb this week in reaction to the shutdown of the Colonial Pipeline, which delivers approximately 45 of all fuel to the East Coast. Over the weekend, the Colonial Pipeline announced they were the victim of a cybersecurity attack and, as a precaution, shut down the pipeline, which runs from Texas to New York Harbor. At this time, some lateral lines have reopened, but there is no word of when the mainline, including the gasoline line, will be operational.

“This shutdown will have implications on both gasoline supply and prices, but the impact will vary regionally. Areas including Mississippi, Tennessee and the east coast from Georgia into Delaware are most likely to experience limited fuel availability and price increases, as early as this week,” said Jeanette McGee, AAA spokesperson. “These states may see prices increase three to seven cents this week.”