As you may have heard, Bill Gates has been buying up farmland across 18 U.S. states through various subsidiary companies.1 In all, he now owns about 242,000 acres of farmland.2 He’s also a longtime promoter of GMOs and recently started calling for a complete transition from meat to lab-grown meat and other fake and unnatural food sources, such as a protein-rich microbe found in a Yellowstone geyser.3

Seeing how Gates always promotes solutions and industries that he has financial investments in, it’s not surprising that Gates insists synthetic beef is a necessary strategy to address climate change,4 having co-funded the startup of the imitation meat company Impossible Foods. Other investors included Google and Amazon.com founder Jeff Bezos.5

The call to replace beef with fake meat is made in Gates’ book “How to Avoid a Climate Disaster: The Solutions We Have and the Breakthroughs We Need,” which was released in February 2021.6

The idea is that by eliminating livestock, we’d reduce methane emissions, a greenhouse gas. However, the notion that cattle are a significant source of methane only applies to animals raised on concentrated animal feeding operations (CAFOs), where they are fed an inappropriate diet of GMO grains — not free-grazing animals raised on a species-appropriate diet of grasses.

So, in reality, a far more sustainable and healthy answer would be to transition away from CAFOs and return to integrated herd management systems, which are an important part of regenerative farming, as grazing livestock optimizes soil quality and improves the quality and quantity of crops. 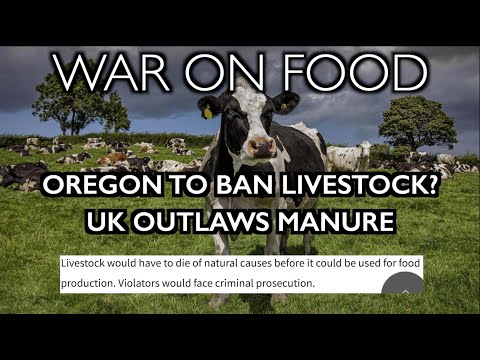 Gates isn’t suggesting the U.S. cut down on meat consumption by a little bit. He wants Americans and other Western nations to switch to a diet of 100% synthetic beef.7

“I do think all rich countries should move to 100% synthetic beef. You can get used to the taste difference, and the claim is they’re going to make it taste even better over time. Eventually, that green premium is modest enough that you can sort of change the [behavior of] people or use regulation to totally shift the demand.”

Gates is no stranger to pushing for regulations that shift consumer demand, so, it’s a curious coincidence that one U.S. state — Oregon — is now proposing a ballot initiative for the 2022 general election that would effectively ban meat sale and consumption in the state altogether.9

On the scale of crazy, it’s certifiable and sounds like something straight out of the satire site “The Onion.” But, if like Gates, you are trying to force a transition into synthetic beef and other patented food sources, it’s a logical, if not necessary, step.

As explained in the Ice Age Farmer video above, Initiative Petition 1310 (IP13) would turn Oregon into a “sanctuary state for animals” by removing exemptions for good animal husbandry practices, criminalizing the raising and slaughtering of food animals in the state, and reclassifying traditional animal husbandry practices such as artificial insemination and castration as “sexual assault.”