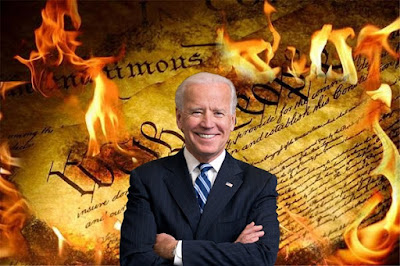 As Joe Biden and his puppet masters rushed to undo as many of President Trump’s actions as possible in just the first week of the Biden/Harris occupation, just months later we see the brutal ramifications of those Biden decrees.

A couple examples of those changes and the consequences offered below.

The Middle East which was heralded as closer to peace than ever before under President Donald Trump, is now exploding in violence.

America went from energy independence, the first time in since 1957, under Trump in 2019, to Biden shutting down the Keystone Pipeline, and one cyber attack managed to shut down a pipeline causing price hikes, long lines and stations running out of gas, within days of the shutdown.

Those examples, along with the list of others described in an open letter signed by 124 retired U.S. Generals and Admirals in detailing Biden’s leftward lurch into Marxism and Socialism,  and stating “We are in a fight for our survival as a Constitutional Republic like no other time since our founding in 1776.”

The issues listed in the letter under the “Additional National Security Issues and Actions,” heading, includes the following.

• The complete “anarchy as seen in certain cities.”

The last but in the eyes of many, the most important, is quoted in full below:

The mental and physical condition of the Commander in Chief cannot be ignored. He must be able to quickly make accurate national security decisions involving life and limb anywhere, day or night. Recent Democrat leadership’s inquiries about nuclear code procedures sends a dangerous national security signal to nuclear armed adversaries, raising the question about who is in charge. We must always have an unquestionable chain of command.

The point here is that they did not pull any punches and were brutally clear in the fact that they believe Joe Biden is a national security threat, and a definite threat to the survival of the Constitutional Republic.

The letter is two pages and one paragraph long and with the remainder of the 8 pages being the names of the signatories.

The spot on points made in the letter won’t really change anything, but it does show that more and more people are starting to see what many in the Independent Media were warning about before the 2020 election, all of which the liberal mainstream media ignored and continues to try to hide.