by Oli Smith, The Express: 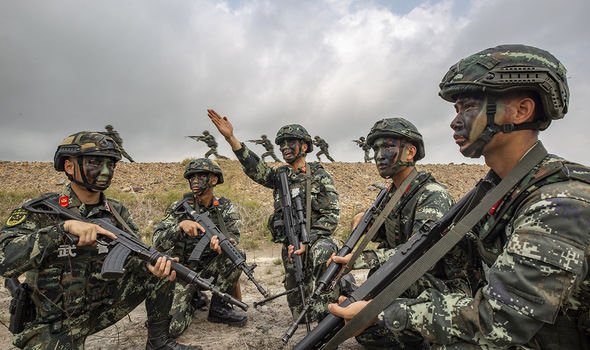 CHINA has issued its deadliest warning yet as Beijing warned that the US will be “defeated” if the two superpowers go to war amid a tense stand-off over the South China Sea and Taiwan.

China has pledged to rapidly defeat the US in a military conflict in one of the country’s most explicit warnings yet. China’s Global Times, which is seen as a Government news outlet, published an editorial revealing the threat in response to joint military drills carried out by the US. The US joined drills with Japan, Australia and France this week in an intended show of force against Beijing.

However, instead of backing down, China appears to have been rattled, prompting a fierce rebuke in Beijing’s state-run newspapers asserting confidence in Chinese military superiority.

RT America’s Alex Mihailovich said: “The Global Times put out an editorial saying the US would be defeated if any conflict broke out in the South China Sea.

“However the drills appeared to irritate China rather than contain it.”

China has pledged to rapidly defeat the US in a military conflict (Image: US GOV)

The threat was issued in response to joint military drills carried out by the US (Image: AP)

He continued: “According to the Global Times editorial, the US will be defeated if it engages in combat with China in its neighbouring waters.”

The editorial also read that the People’s Liberation Army “doesn’t even need to make pointed responses to the joint drills since its insignificant militarily”.

Former UK MP George Galloway told RT that this would prompt an increase in military preparedness from China.

He said: “What a spur this must be to China’s own warship development.

“If they are not fools, they will be building so many warships right now that no-one will dare to steam up the East China Sea and threaten them in any way.”

The week-long drills sees troops training in activities such as simulated urban combat, as well as defending remote islands and intercepting vessels at sea.

The drills are designed to send a message to an increasingly expansionist and aggressive China.