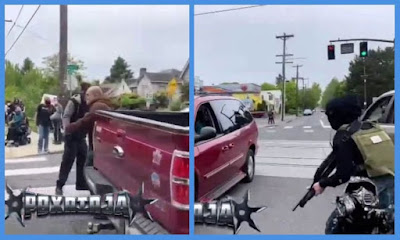 A few years ago, we thought Portland, Oregon had hit the lowest point as Antifa goons blocked streets, directed traffic by ordering them to obey their rules, all the while police stood aside and watched the harassment without doing a thing to help the drivers.

Recently the Mayor, Ted Wheeler, largely responsible for forcing the police to stand down and let the Antifa thugs rule the streets for years, decided it was time to pretend to care, so he gave a performance in later April, and declared war on Antifa.

The same group he stood with while they torched federal buildings, resulting in Wheeler and Antifa being teargassed .

“I’ve extended the state of emergency through the weekend. Our job is to unmask them, arrest them, and prosecute them. I want to personally thank neighbors, family, friends and others who have come forward with vital evidence. People know who these criminals are. They know what they’re up to. If you have any information, please contact the police. Acting Chief Davis will provide specifics shortly.

“I also want you to know that these people often arrive at their so-called direct actions, in cars. And they’re all dressed in all black. If you see this, call the police. If you can provide a license plate, if you can do so safely, that information can help later. Together we can make a stand. We’re doing what we can today. I’m also asking for your help to make a stand and take our city back.”

Antifa is so petrified of Wheeler they proceeded to run and hide…..yeah, just kidding!!! They published a video which included Wheelers home address, and a veiled death threat.

Fast forward two weeks to May 6, 2021, and lo and behold, not only are Antifa members still blocking traffic and marching the streets, they are harassing drivers, armed to the teeth, and attacking people.

Independent journalist Andy Ngo, who has spent years documenting the Antifa violence in Portland, and who was attacked by Antifa and ended up hospitalized with a brain bleed, updates us on the events on May 6th.

Today, armed #BLM protesters in Portland shut down the road. They beat up this older man & stole his gun. Additionally, the rioters smashed out windows of another vehicle. One person was transported to hospital. Police made no arrests. #antifa

A video was also shared on his Twitter account, and another shows a different incident. Jack Posobiec also shared a video and a description of events, stating ” BREAKING: Heavily armed anarchist militia surrounded and attacked a motorist at gunpoint in Portland, smashing glass, slashing tires.”

THIS is Portland, Oregon, two weeks after the mayor pretended to declare war on Antifa.

While Portland has been shown to be full of unchecked violence, harassment and thuggery, there are many tourist attractions, such as the forest part, Oregon zoo, aerial tram, Pittock Mansion, Oregon Museum of Science and Industry, Portland Saturday market, the Grotto gardens,  Lan Su Chinese Garden, Pearl District, and Washington Park.

People must be warned of the dangers of  going to Portland, for any reason.

The media won’t help as they not only encourage the violence in Portland, one left-wing journalist has been linked to the video containing the death threat against Wheeler.