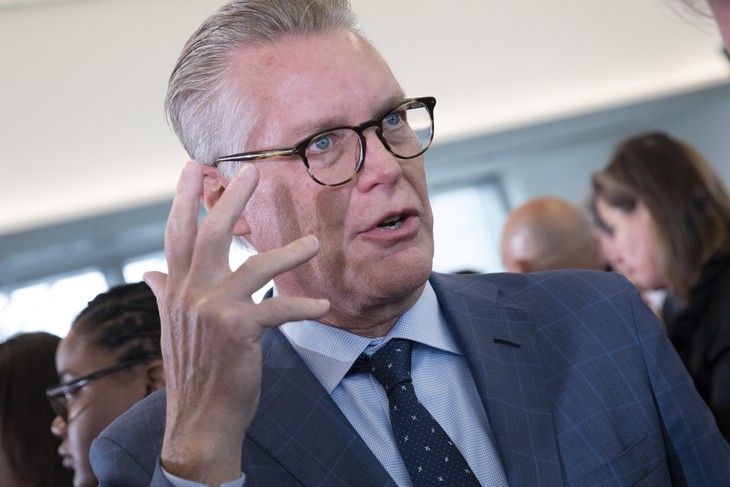 Roughly 100 of America’s top corporate leaders and CEOs gathered both in-person and virtually on Saturday to strategize ways to combat new election integrity laws like Georgia’s H.B. 531. Jeffrey Sonnenfeld, a Yale University management professor who helped organize the meeting, framed it as a response to threats of reprisals after Georgia-based companies like Delta Air Lines, Coca-Cola, and Aflac Insurance condemned the Georgia bill. He called election integrity measures “anti-undemocratic.”

“The gathering was an enthusiastic voluntary statement of defiance against threats of reprisals for exercising their patriotic voices,” Sonnenfeld told CBS News. The corporate leaders “recognize that they need to step up to the plate and are not fearful of these reprisals. They’re showing a disdain for these political attacks. Not only are they fortifying each other, but they see that this spreading disease of voter restrictions from Georgia to up to possibly 46 other states is based on a false premise and its’ anti-democratic.”

Former President Donald Trump called for a boycott of Delta, Coca-Cola, and Major League Baseball (MLB) and other companies after they condemned the Georgia law, repeating Democratic talking points that smeared the legislation. “Boycott all of the woke companies that don’t want Voter I.D. and Free and Fair Elections,” Trump said in a statement last week.

Senate Minority Leader Mitch McConnell (R-Ky.) also condemned the companies for spreading misinformation about the bill. He briefly suggested reprisals for companies that smeared the legislation, and then withdrew his threat.

Contrary to Sonnenfeld’s claim, election integrity laws are not “based on a false premise” and they are not “un-democratic.” While some have claimed that Joe Biden won the presidential election due to fraud, the reality is far more complicated. Biden most likely won with the most legal votes, but last-minute election changes and cash infusions from the Center for Tech and Civic Life tilted the playing field in his favor. Voters are rightly concerned about election integrity and the new laws represent a response to these abuses — not an attack on legal voting.