It also ignores Gibson’s paradox, which demolishes the theory that managing interest rates controls price inflation. And incredulously, the whole basis of banking regulation assumes that commercial banks are just intermediaries between depositors and borrowers. That model of banking fails to address the simple fact that banks create credit out of thin air and that deposits are the property of the banks, and not their customers.

The process of credit creation is described herein and is markedly different from that commonly assumed. Changes in the level of outstanding bank credit have nothing to do with interest rates, except perhaps in extremis.

It is hardly surprising, therefore, that critical mistakes are being made by policy planners. And we find that the US bank cohort is now reducing outstanding bank credit for the non-financial economy, which will make it impossible for businesses to deliver sufficient product to satisfy expected consumer demand. Far higher consumer prices than currently discounted in financial markets will follow.

Consequently, bond yields are set to rise much further, marking the end of the global financial asset bubble, and the failure of the fiat currency regime.

It must be a mystery to central bankers that reducing interest rates to the zero bound hasn’t stimulated their economies as expected. It is also a surprise to the vast majority of economists and financial commentators. Part of the problem is the modern habit of taking government statistics as Gospel, another part is not understanding what individual statistics truly represent, and finally there are the fault lines in neo-Keynesian macroeconomics. And at the root of it is the cost of production theory of prices.

For the establishment, interest is a cost, which along with other costs plus a margin for profits is the basis of setting consumer prices. Reduce the cost, it is argued, and with prices targeted to increase at two per cent annually, there is a strong incentive for businesses to invest in production. We see the cost theory of prices reflected in government regulations and government spending as well, which forces everyone into paying monopoly prices — regulated, of course, to stop profiteering.

The error has a long history, starting with Adam Smith and continuing with Marx where it took a more distinct form in his cost of labour theory of prices. But there were early dissenters, such as the French economist Jean-Baptiste Say (1767-1832), who about prices wrote, “subject to the influence of the faculties, the wants and the desires of mankind, they are not susceptible of any rigorous appreciation, and cannot, therefore, furnish any data for absolute calculations”. In other words, the idea that prices are simply a matter of a cost-plus basis is wrong. With respect to interest, it was another early French economist, Turgot (1727-1781), who gave the relationship with capital its proper context. He understood that the capitalist-entrepreneur required capital to finance production; to pay wages and other costs before anything could be sold. It was capital that had to be accumulated from savings for which a return must be paid in the form of interest.

Turgot was the first economist from the time of the early industrial revolution to explain the role of capital and why providers of capital had the right to expect to be compensated for their temporary parting with it. Interest rates were a matter for negotiation between lender and borrower. The interest “profit” was no different from profits from other activities, and the rate included factors such as the risk that the money would not be returned, and the loss of its possession for a period of time. Turgot anticipated the Austrian school and in particular the work of Böhm-Bawerk (1851-1914) on time preference.

These findings were passed over by later economists, particularly Keynes. In the process, Keynes noted and named Gibson’s paradox, which demonstrated a strong positive correlation between price levels and long-term interest rates, and not between interest rate borrowing costs and the rate of price inflation, as commonly supposed. Keynes declared it to be “one of the most completely established empirical facts in the whole field of quantitative economics” before he succumbed to his macroeconomic visions which denied its existence.[i]

The history of borrowing for industrial production

All capitalist ventures require the assembly of raw materials, plant and equipment, premises, labour skilled and unskilled, additional services and monetary capital. Arguably, the most important of all these is monetary capital, because the time taken between assembling these factors and the sale of a final product requires funding. A businessman or entrepreneur must calculate all the costs, the length of the period of the absence of any income and make assumptions about the volumes and prices of the final product he can expect to achieve.

These factors are all interrelated and require estimation. What initially concerns us are the assumptions an entrepreneur makes about the value of the final product. For him it all hangs on his estimates of final sales and the prices he can expect to obtain. When he has estimated them and calculated his costs, he will know how profitable the venture should be, and only then can he estimate what he is prepared to pay in interest to obtain the capital to fund the project. To calculate margins any other way is to put the cart before the horse.

The basis of business calculation must therefore reflect a basic correlation between prices and the cost of business funding, and Figure 1 illustrates this correlation in the UK over a 250-year period. 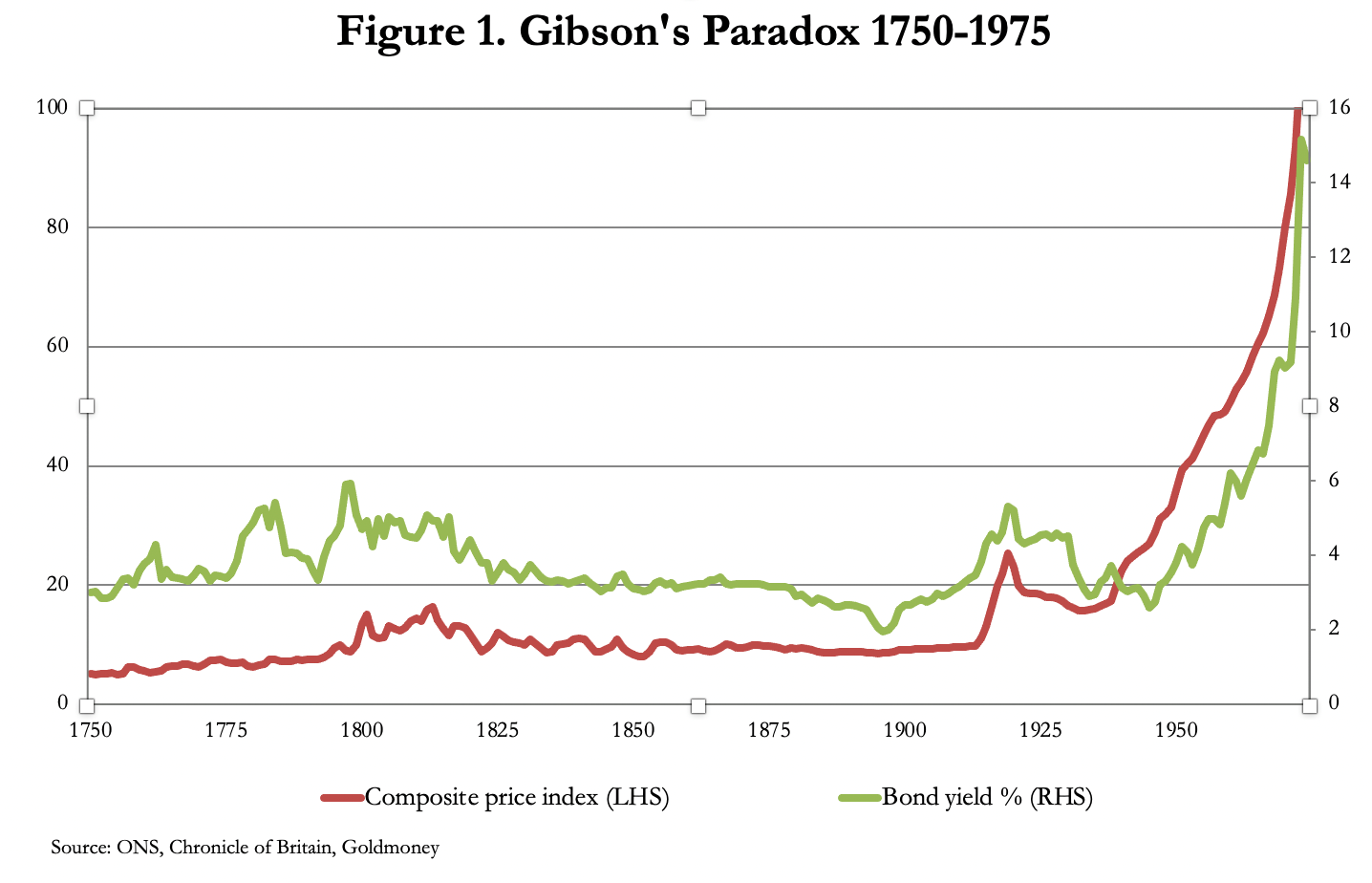 Even in the 1970s, when money was fully fiat and the trend of prices was rising more than at any time since 1750, the relationship held. In a business recession, when the level of business activity declines, an entrepreneur uses the same factors in his calculations as in better times, so business cycles are irrelevant to the process. And with respect to the price for his final product, his assumptions can only be based on prices at the time of calculation. What he actually achieves in terms of final prices is not something he guesses at the beginning of a project, and this is why medium- and long-term financing costs usually track prices.

The other side of this correlation was the non-correlation between price inflation and borrowing costs, since the latter are tied to the general price level as illustrated in Figure 1 and not its rate of change. At least, that was the case until central banks increasingly distorted money relationships in the post-war years. This is illustrated in Figure 2, again for the UK.