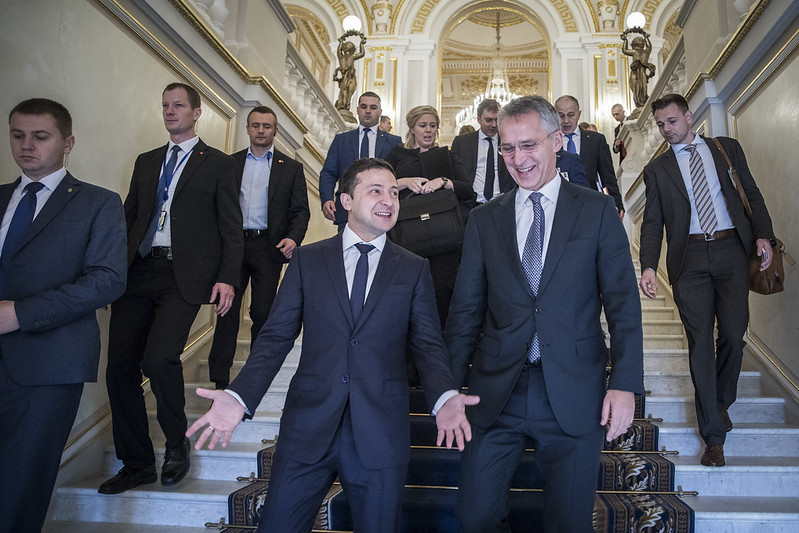 April 9 — Following the regime change coup in February 2014 which toppled the elected government of Ukraine — which could not have occurred without the open support of the United States and governments in NATO — Russian leaders repeatedly warned that the entry of Ukraine into NATO was a “red line,” which Russia could not allow. The steady eastward expansion of NATO, following the peaceful disbanding of the Warsaw Pact military alliance in 1991, broke pledges given to Soviet leaders that there was no intention to move NATO forces closer to the borders of Russia.

It is for this reason that the signing of presidential decree number 117/2021 by Ukraine’s President Volodymyr Zelensky on March 24, 2021, which proclaims the official policy of Ukraine is to take back Crimea from Russia, led to a dramatic increase in tensions, which may have been the intention of this provocation. When there was a movement of Russian troops into the border area, which the Russians said was part of scheduled training maneuvers, and a reinforcement of Russian forces in Crimea, the U.S. raised the alert status of its military forces in Europe to the highest level. Skirmishes broke out between Ukrainian forces and the military units defending the Luhansk and Donetsk “breakaway republics”, which included Ukrainian forces launching shells into Donbas, along with unconfirmed reports of the deaths of Ukrainian soldiers, breaking a shaky ceasefire.

Tensions soared again after U.S. President Biden told Zelensky that he is affirming the United States’ “unwavering support for Ukraine’s sovereignty and territorial integrity in the face of Russia’s ongoing aggression in the Donbas and Crimea.” Biden’s talk with Zelensky was followed by a series of discussions by administration officials with their Ukrainian counterparts, including calls from Secretary of State Blinken, National Security Adviser Sullivan, Defense Secretary Austin and the Chairman of the U.S. Joint Chiefs of Staff, General Milley.

At the same time, Zelensky exhibited a flight forward mentality. On April 5 and 6, he spoke about the crisis, and Ukraine’s desire to be accepted into NATO, with the U.K.’s Prime Minister Boris Johnson, Canada’s P.M. Trudeau, and with NATO General Secretary Jens Stoltenberg. In his discussion with the latter, a report from his office stated that he called for a greater NATO presence in the Black Sea, which would be a “powerful deterrent to Russia,” which he accused of continuing “the large-scale militarization of the region” and action which “hinders merchant shipping.” He responded to the request that Ukraine carry out military reforms in order to qualify for membership by insisting that they are committed to making reforms, “but reforms alone will not stop Russia. NATO is the only way to end the war in the Donbas.” Accepting Ukraine’s NATO Membership Action Plan (MAP), he added, “will be a real signal for Russia.”

On April 6-7, the Chairman of NATO’s Military Committee and senior military advisor to Stoltenberg, Air Chief Marshal Sir Stuart Peach was in Kiev, for a meeting with Zelensky. He also met with the Commander-in-chief of Ukraine’s armed forces, Col.-Gen. Ruslan Khomchak. After his meeting with Zelensky, he said that NATO condemns Russia’s “illegal annexation of Crimea, and its aggressive actions in eastern Ukraine,” adding “Ukraine is one of NATO’s closest and most important partners.” The “annexation” of Crimea took place nearly seven years ago, after its population overwhelmingly voted to rejoin Russia.

As pressure to bring Ukraine into NATO builds, NATO is holding Defender Europe 2021 exercises. The purpose of these maneuvers, according to the representative of Ukraine in the Trilateral Contact Group on Donbas, Alexey Arestovich, on the YouTube channel UKRLife.TV, is to prepare for possible military confrontation with Russia. This exercise, he elaborated, is designed to coordinate actions, from the Baltic Sea to the Black Sea, to prepare for “war with Russia, the scenario of armed confrontation with Russia”. The exercises will stretch through May and June, and will be the largest in twenty-five years, involving 28,000 forces from 26 nations, including Ukraine.

In light of these provocations, Kremlin spokesman Dmitry Peskov expressed doubt as to whether Ukrainian President Volodymyr Zelensky even controls the Ukrainian army along the line of contact, which the ceasefire established. “So far, we can’t see signs indicating that the Ukrainian side wants to somewhat calm down, drop bellicose rhetoric hidden behind the talk about some imaginary threat and take control of its army units that are deployed directly along the contact line [in Donbas] and that often become a source of provocations,” he said, reported TASS.

“It’s vital,” he added, “to make sure that nothing incites the Ukrainian Armed Forces to launch hostilities against their own people, the people who live in the self-proclaimed republics.”

A Pattern Of Incitement

The Atlantic Council, a think tank dominated by war hawks from the U.S. and NATO countries, is among those institutions with ties to the Biden administration which has been fanning the flames for a NATO-Russian conflict over Ukraine. Notable is a February 16 report it published titled, “Why is Ukraine still not in NATO?” It included an interview given by Zelensky to Axios news service on January 23, 2021, just days after Biden’s inauguration, in which he was asked what he would say to Biden when they first speak. Zelensky said he would ask a simple question: “Mr. President, why are we not in NATO yet?”

In this interview, he says that if Ukraine were already in NATO, “there would have been no escalation in the east of Ukraine.” If Ukraine is targeted by the Kremlin now, “who is next? It could be any European country, it could be the United States.” He warned that the west is facing not just threats from the Russian military, but “information warfare, cyber attacks.” He added that while “sanctions are effective” in holding back Russia — referring to the attempt to shut down the Nord Stream 2 gas pipeline, which was pushed by Secretary of State Pompeo during Trump’s presidency, and now by Biden and Blinken — they are not enough. He concluded by stating that the return of Crimea must be on the agenda. “Are you saying we should give up on Crimea?”, he asked the interviewer.

Among the leading advisers to Biden on Ukraine is Michael Carpenter, who is a nonresident senior fellow with the Atlantic Council’s Eurasia Center. Carpenter, who served as former Deputy Secretary of Defense for Russia, Ukraine, Eurasia and the Balkans during the Obama administration, and as special expert on Russia for the National Security Council, is also the Managing Director of the University of Pennsylvania’s Biden Center for Diplomacy and Global Engagement. In 2018, he was the escort for Ukrainian neo-Nazi and government official Andriy Parubiy during his trip to Washington. When confronted about Parubiy’s unrepentant public ties with the Nazi movement, which provided muscle for the 2014 coup, he defended him as a “patriot” and “great leader.” Carpenter was the coauthor, with Biden, of an article published in the Council on Foreign Affairs journal {Foreign Affairs} in its January-February 2018 issue titled “How to Stand Up to the Kremlin: Defending Democracy Against Its Enemies”.