“Survivalism,” wrote Evan Osnos in a 2017 article for The New Yorker, “the practice of preparing for a crackup of civilization, tends to evoke a certain picture: the woodsman in the tinfoil hat, the hysteric with the hoard of beans, the religious doomsayer. But in recent years, survivalism has expanded to more affluent quarters, taking root in Silicon Valley and New York City, among technology executives, hedge-fund managers, and others in their economic cohort.”

We have always taken exception to the mainstream media’s portrayal of the ordinary gold owner as “the woodsman in the tinfoil hat”. . . etc. Many among the media are utterly amazed to learn that people like Steve Huffman (Reddit, CEO), Peter Thiel (PayPal founder), and the long roster of other luminaries mentioned in this New Yorker article are identified as “preppers” in one capacity or another. They would probably be even more amazed to learn that many of this same group are likely to be gold and silver owners. We say “likely” because precious metals owners by and large are a group reluctant to advertise their ownership.

As it is, they take a place alongside a wide range of Americans who own precious metals – physicians and dentists, nurses and teachers, plumbers, carpenters, and building contractors, business owners, attorneys, engineers, and university professors (to name a few.) We know because that is the description of our clientele here at USAGOLD. Gold ownership, in short, is pretty much a Main Street endeavor. In a Bankrate survey taken last June, one in seven investors (14%) chose gold or other precious metals as the best place to park money they wouldn’t need for more than ten years – making it the fourth most popular category. Similarly, a 2020 Gallup poll found that 17% of American investors rated gold the best investment “regardless of gender, age, income or party ID. . .” One might assume that if Bankrate or Gallup took a similar poll today, even more investors would give the precious metals a thumbs up given what has occurred over the past year.

Those well-to-do preppers, as it turns out, were uncannily ahead of the times. A little over three years after the New Yorker article was published, large numbers of the not-so-super-rich followed in their footsteps – setting up “bugout” retreats in the countryside and small-town America (though for reasons unforeseen in the article) while a good many fled the big cities permanently for safer environs. That mindset – the general flight to safety – has echoed loudly in the precious metals markets. The World Gold Council reports global retail gold investment demand running at record levels in 2020. As for silver, just last week, the Silver Institute, a research organization not given to hyperbole, forecasted an eye-catching 26% increase in physical silver investment for 2021 based on current trends.

This eye-opening, in-depth introduction to precious metals ownership will help you avoid many of the pitfalls that befall first-time investors. Find out who invests in gold, what role gold plays in serious investors’ portfolios, and the when, where, why, and how of adding precious metals to your holdings.  To end right, it is critical that you start right, and the six keys to successful gold ownership will point you in the right direction.

Silver’s next move ‘could be extraordinary’

Commodity analyst Andrew Hecht who once structured one of the largest silver bullion positions on record while at Wall Street’s Salomon Brothers, characterizes silver’s price action since the beginning of the year as a rubber band stretched to its limit. “When it snaps,” he says, “watch out, the move could be extraordinary.”

“The foray into the silver market,” he says in an analysis posted at Seeking Alpha, “is a long story for another time. However, suffice to say, I learned a lot about silver liquidity, amassing a quarter of a billion-ounce position and liquidating it during that time. Silver can be a wild and volatile market when it decides to move. However, it is highly liquid during consolidation periods. Hundreds of millions of ounces can change hands without much price action. Silver has a lot more going for it in 2021 at over $25 per ounce than it did in 1995 at the $5 level…Silver’s consolidation period and tightening price ranges could be the prelude to a new record high above the 1980 $50.36 peak in the COMEX futures market.”

Analyst Peter Krauth ups the ante on silver, predicting a price double Hecht’s target. “If we account for inflation,” he writes in a piece posted recently at the FXEmpire website, “and that’s massively understated ‘official inflation,’ then silver prices peaked at $120 in 1980 and around $57 in 2011. (Please see the chart below.) Today’s price near $24 is still well below those levels, suggesting a lot of upside remains ahead. In fact, at $24 today versus the inflation-adjusted $120 in 1980, silver is currently about 80% below that peak…Looking at silver from a technical perspective, in my view, we are either at or near a final bottom for this correction.” He concludes: “It’s time to be a silver contrarian. History has rewarded us repeatedly. $100 silver is well within reach.”

The inflation-adjusted price of silver
(Based on the Bureau of Labor Consumer Price Index, 1970 to present) 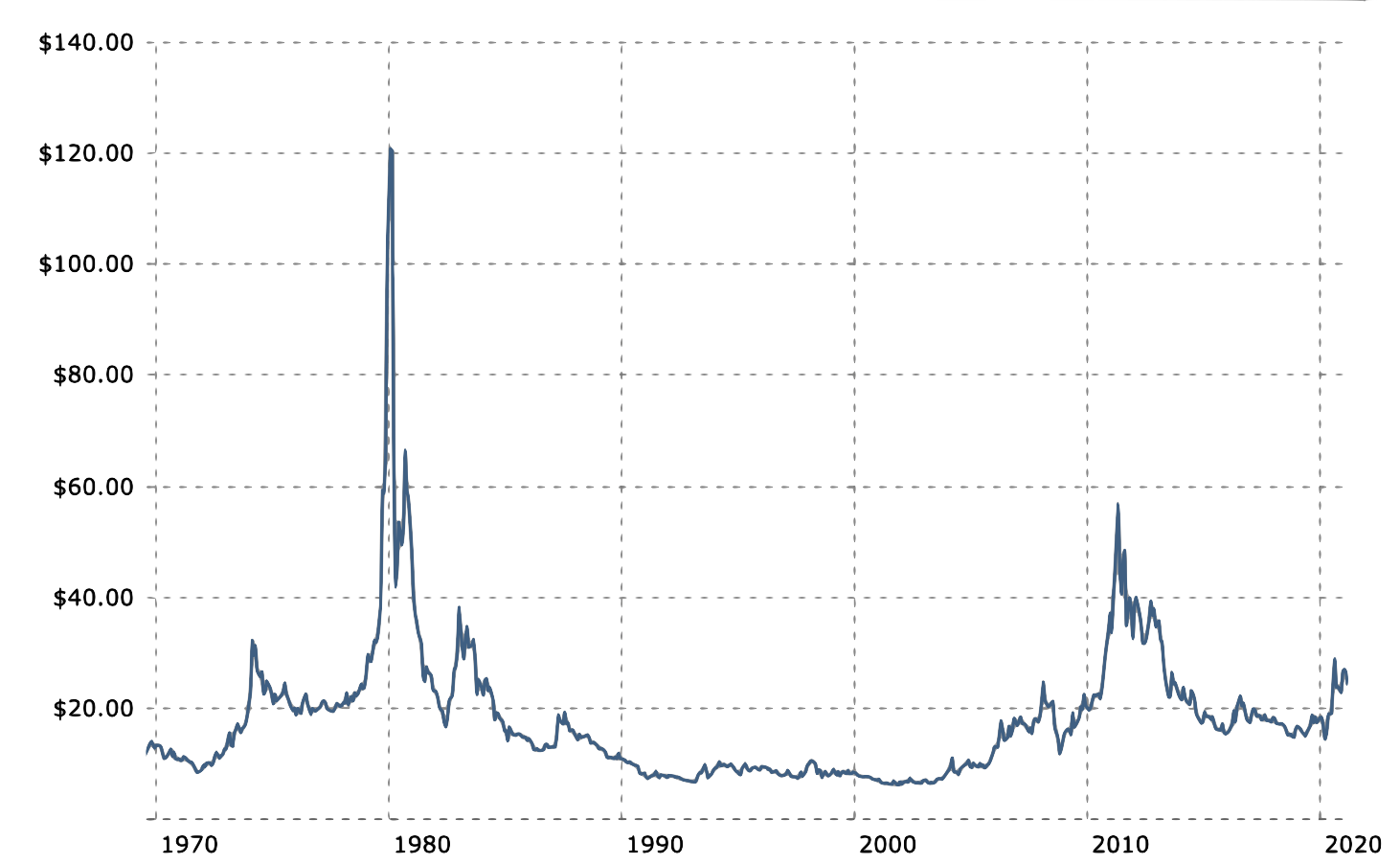