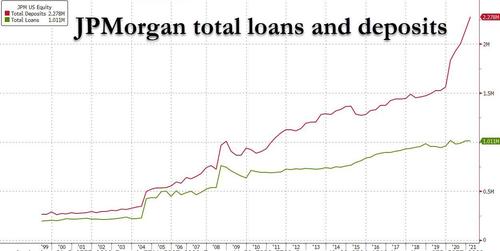 There was a remarkable disclosure in the latest JPMorgan earnings report: the largest US bank – an entity that historically has best been known for making loans to the broader population – reported that in Q1 its total deposits rose by a whopping 24% Y/Y and up 6% from Q4, to $2.278 trillion, while the total amount of loans issued by the bank was virtually flat sequentially at $1.011 trillion, and down 4% from a year ago.

In other words, for the first time in its history, JPM had 100% more deposits than loans, or inversely, the ratio of loans to deposits dropped below 50% for the third quarter in a row after plunging in the aftermath of the covid pandemic: 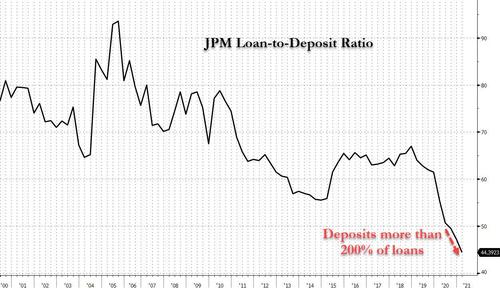 An even more stunning divergence between total deposits and loans, emerges at Bank of America where deposits similarly hit a new all time high of $1.88 trillion, even as the bank’s loans have continued to shrink at an alarming, deleveraging (and deflationary) pace and are now at $911 billion, below their level during the great financial crisis: in other words, there has been 12 years with zero loan growth at Bank of America!

It’s not any better at either Citigroup…

… or even Wells Fargo (which while having been limited by the Fed in how much loans it can issue, apparently has had no limit on how many deposits it can collect):

Summarizing the above data, we get the following picture breaking down total loans by Big-4 bank:

Finally, aggregating the data across the big 4 banks shows something striking: there has been no loan growth since the global financial crisis, while total deposits have doubled!