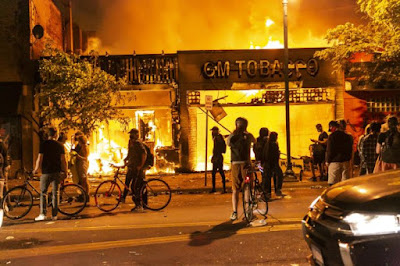 As most already know Mad Maxine Waters, known for her race-baiting, recently made comments about violent rioters needing to be more “confrontational” if Derek Chauvin isn’t convicted of murder in the death of George Floyd.

The comments were so grossly egregious the Judge presiding over the Chauvin trial, in denying the defense motion for mistrial, told the defense that Waters “may have given you something on appeal that may result in this whole trial being overturned.”

If Water’s antics weren’t enough, now another infamous race-baiter, Al Sharpton is heading to Minneapolis to stoke the fires even more.

The Mayor of Minneapolis, Jacob Frey, has also offered the defense yet more to use on appeal should the jury convict Chauvin, by stating publicly, “Regardless of the decision made by the jury, there is one true reality, which is that George Floyd was killed at the hands of police.”

More stoking of the fires surrounding this whole case that has shown riots all across America since 2020 when Floyd died in police custody.

The media has also joined the “let us intimidate the jury” game they seem to be playing with people’s lives, and are  revealing personal information about certain jurors, such as  CBS informing their audience that one juror lives in Brooklyn Center where Daunte Wright died. Wright was another suspect that died after being shot by police.

What possible reason other than jury intimidation, would CBS have to reveal a juror from one case, lived in the area where a different incident happened?

That follows another news outlet, NYT,  writing a piece specifically about the jurors.

Top all that off with the Minneapolis Star Tribune writing an entire article headlined with “Who are the jurors in the Derek Chauvin trial?,” on April 19th.

As the Democrats and media attempt to intimidate the juror into coming back with a verdict the media/Dems want, instead of  one based on the evidence of the trial, they are providing the defense with ample material for an appeal, which means, no matter the verdict, this is not over by a long shot.

SOMETHING BIG IS BREWING….

That comment comes from commenter, Bart, in highlighting how a creepy video coming out of Washington, D.C., is showing streets crawling with police.

Bart responded to the video by stating “very weird things going on – something big is brewing,” and we must agree with that assessment, as we look to other areas preparing for the worst of reactions to whatever verdict comes down in the Chauvin trial.

Minneapolis is preparing for the worst as the jury meets to deliberate a verdict in former police officer Derek Chauvin’s murder trial. Some 3,000 National Guard troops are deployed across downtown and throughout Minnesota.

Two Guard members were slightly injured early Sunday when someone fired into their Humvee. Minnesota Governor Tim Walz and Minneapolis Mayor Jacob Frey called for calm and said violence will not be tolerated.

The precautions are intended to head off the kind of riots that destroyed $350 million in property last summer when George Floyd was killed. Outside the courthouse are fences, plywood and a strong security presence.

Similar steps are underway across the country, including in Beverly Hills, which is stepping up patrols, and Philadelphia, where boards are covering windows. At least six states and Washington, D.C., have made requests for help from the National Guard.

Minneapolis Public Schools will move to remote learning starting on Wednesday in anticipation of a trial verdict.

Metal barriers surrounded the Salt Lake Police Department, barriers that officers set up ahead of a protest on Friday, and that will remain up in preparation for protests in the wake of Chauvin’s trial.

Activists claim that anything short of a murder verdict AND life in prison would be considered :injustice.”

According to CNN (Archive.is link here), Los Angeles, San Francisco, Atlanta, New York City, and Philadelphia, are all also making preparations for the chaos and likely rioting after the verdict is announced.

That is just the tip of the iceberg, but there is, indeed, something big brewing and everybody knows it and can “feel” it in the air.