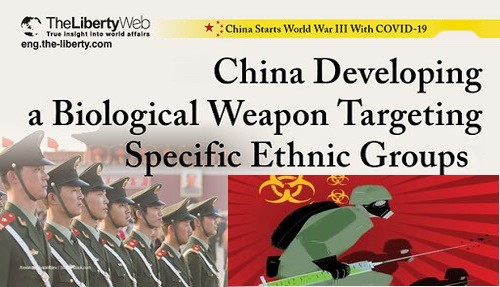 With federal authorities urging an immediate pause to the Johnson and Johnson single dose vaccine after several people were reported to become ill within weeks after getting the vaccine with what is being called ‘a rare blood clotting disorder’, we have to take a look back at an interview we posted in this April 11th ANP story titled “‘Eugenicists Have Control Of The Levers Of Power’ Former Big Pharma Insider Warns As World Is Herded Like Sheep To The Slaughter – Lethal Injections For All If The Globalists Get Their Way”

Reporting within that story that former Pfizer Vice President Dr. Michael Yeadon had recently given an interview to Life Site News on why Americans and people across the world should avoid ‘the jab’ at all costs, Dr. Yeadon brought up something that we absolutely have to dive into more deeply in this story, the relative ease of the globalists using bioweapons to directly and specifically target ‘a single individual’, ‘community’, ‘race’ or ‘ethnicity’.

Warning us: “If you wanted to introduce a characteristic (within the ‘vaccine’) which could be harmful and could even be lethal, and you can even tune it to say ‘let’s put it in some gene that will cause liver injury over a nine-month period,’ or, cause your kidneys to fail but not until you encounter this kind of organism [that would be quite possible], biotechnology provides you with limitless ways, frankly, to injure or kill billions of people.”

So with the very real possibility that people will become sick or even die at any point following their getting ‘the vaccine’, and we use that word lightly with these ‘shots’ actually being mRNA injections that may permanently alter ones DNA, Dr. Yeadon’s warning also ties in directly to Deagel’s forecast of a greatly depopulated America by the year 2025, the year they forecast America’s population to be down to 99 million people from the over 333 million people of 2020. So once again, from this absolutely critical Life Site News story before we continue.:

1) There is “no possibility” current variants of COVID-19 will escape immunity. It is “just a lie.”

2) Yet, governments around the world are repeating this lie, indicating that we are witnessing not just “convergent opportunism,” but a “conspiracy.” Meanwhile media outlets and Big Tech platforms are committed to the same propaganda and the censorship of the truth.

3) Pharmaceutical companies have already begun to develop unneeded “top-up” (“booster”) vaccines for the “variants.” The companies are planning to manufacture billions of vials, in addition to the current experimental COVID-19 “vaccine” campaign.

4) Regulatory agencies like the U.S. Food and Drug Administration and the European Medicines Agency, have announced that since these “top-up” vaccines will be so similar to the prior injections which were approved for emergency use authorization, drug companies will not be required to “perform any clinical safety studies.”

5) Thus, this virtually means that design and implementation of repeated and coerced mRNA vaccines “go from the computer screen of a pharmaceutical company into the arms of hundreds of millions of people, [injecting] some superfluous genetic sequence for which there is absolutely no need or justification.”

6) Why are they doing this? Since no benign reason is apparent, the use of vaccine passports along with a “banking reset” could issue in a totalitarianism unlike the world has ever seen. Recalling the evil of Stalin, Mao, and Hitler, “mass depopulation” remains a logical outcome.

7) The fact that this at least could be true means everyone must “fight like crazy to make sure that system never forms.”

With Dr. Yeadon warning also within that interview that we’re witnessing nothing less than a huge conspiracy between willing participants and willing governments to ‘lockdown the world’ and impose tyranny, and not just ‘convergent opportunism’, any ‘conspiracy’ between ‘ordinary Americans’ to ‘wipe people off the face of the planet’ would be hugely criminal, so why do the ‘global elite’ get a pass?

And as Dr. Yeadon also warns, should these globalists get their sinister way and legislate ‘vaccine passports’ into existence in America, Americans might soon need permission to leave their own homes. Once again, from this Life Site News story. in which Dr. Yeadon warns us about this ‘conspiracy’ that the globalists have planned for us with vaccine passports and an endless series of mRNA injections in our futures. Once again, we’re witnessing ‘incrementalism’ before our very eyes.