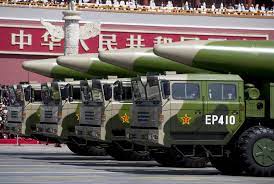 An article under the above title was published on March 20 in the National Interest by Lyle Goldstein, but not noted by EIR at the time. Goldstein, an Associate Professor in the China Maritime Studies Institute (CMSI) at the U.S. Naval War College in Newport, Rhode Island, is fluent in both Chinese and Russian, and is a frequent critic of the imperial U.S. thinking and policies.

In this case, Goldstein is sending a wake-up call to the war hawks in the United States who are acting as though the U.S. were still the only superpower and could dictate policies at will under the misconception that no country can withstand U.S. military force. Goldstein reviews the recent developments of China’s nuclear arsenal. He starts with a 2015 graphic from Naval & Merchant Ships, a Chinese journal, which shows the “impact of a Chinese intercontinental ballistic missile (ICBM) strike by twenty nuclear-armed rockets against the United States,” destroying most of the major U.S. cities.

Beyond that, Goldstein notes, the missile used in the graphic was the “DF-5 first generation ICBM. In other words, the illustration is perhaps a decade or more out of date. As China has deployed first the road-mobile DF-31, then DF-31A and now JL-2 (a submarine-launched nuclear weapon), China’s nuclear strategy has moved from ‘assured retaliation’ to what one may term ‘completely assured retaliation.’” This brings to mind Tulsi Gabbard’s recent tweet: “Are we prepared to see our loved ones burn alive in a nuclear holocaust in a war with Russia over Ukraine? If not, cut out the macho saber rattling and deescalate before it’s too late.”

Goldstein reports on the appearance of several articles in Chinese press calling on the government to carry out a nuclear weapon buildup to match China’s role as a major power, but others insisting that the country must retain only “small, elite and effective nuclear forces” as a deterrence.

Goldstein’s conclusion is most important: “As one can see from this discussion, there is ample reason for anxiety with many new Chinese nuclear systems now coming online, as well as substantial reason for optimism. As an author who frequently rides China’s high-speed rail [高铁], I am acutely aware that astronomical sums of money spent on that system could just as easily have been spent building an enormous arsenal of nuclear weaponry. That was not done and it’s certainly good that Chinese leaders have their priorities straight. American strategists need to keep this Chinese restraint in mind, especially as they weigh both new, expensive weapons systems (missile defense augmentation, the new strategic bomber, SSBN-X and also prompt global strike) and a set of measures to counter Beijing within the maritime disputes on its flanks.”