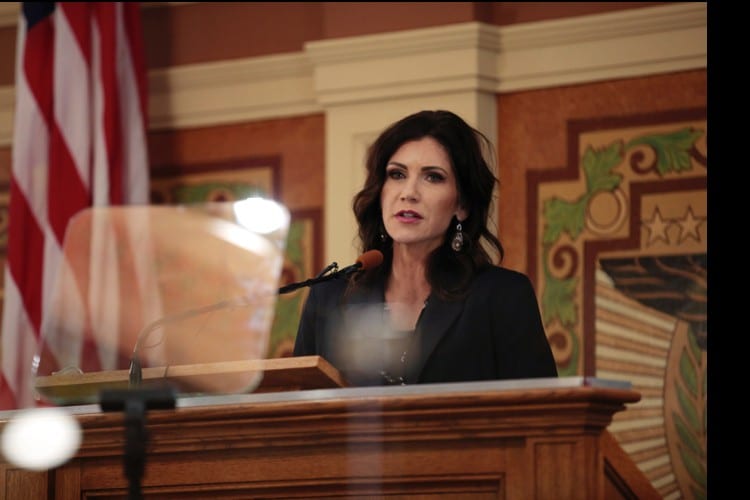 Noem joins Greg Abbot of Texas, Ron DeSantis of Florida, Greg Gianforte of Montana, Doug Ducey of Arizona, Brad Little of Idaho, and Spencer Cox of Utah — all Republicans — on the list of governors who have issued executive orders against such anti-freedom measures.

“Since the start of the COVID pandemic, we have provided the people of South Dakota with up to date science, facts and data and then trusted them to exercise their personal responsibility to make the best decisions for themselves and their loved ones,” Noem said. “We’ve resisted government mandates, and our state is stronger for it.”

“I encourage all South Dakotans to get vaccinated against COVID-19, but we are not going to mandate any such activity,” the governor continued. “And we are not going to restrict South Dakotans’ exercise of their freedoms with un-American policies like vaccine passports. In our state, ‘Under God the people rule.’ And that is how we will operate for as long as I am governor.”

Lawrence Gostin of Georgetown’s O’Neill Institute for National and Global Health Law believes that the governors’ executive orders will ultimately amount to nothing. But laws passed by state legislatures might. “Governors have no power to prohibit cities or counties from issuing passports or banning the private sector,” Gostin told NBC. “But if the Florida or other state legislature passed a law, it could preempt local governments from issuing passports.

Meanwhile, several other states are considering some sort of vaccine passport, which would allow businesses to not serve customers who cannot prove that they’ve been vaccinated against COVID-19. New York has already unveiled its “Excelsior Pass,” a smart phone app which allows users to prove their vaccination status or that they’ve recently tested negative for COVID-19, so that they may gain entry to public places. The app is already being used by Madison Square Garden in Manhattan and Times Union Center in Albany.

Hawaii is currently testing technology for a vaccine passport. Democrat Governor David Ige says that a vaccine passport is coming for that state. “(Vaccination passports) won’t happen for at least four weeks or so,” Ige said at a news conference in early April. Two companies, CommonPass and CLEAR, are said to be close to perfecting the technology.

“I believe that (CommonPass and CLEAR) will be amongst the first two companies that actually get a working vaccine passport, and we’re just glad that they are working with us because that means Hawaii would be able to incorporate that, much, much ahead of other jurisdictions.”

Several countries have already begun to use vaccine passports, most notably Israel, Japan, China and Denmark. All are already using a form of vaccine proof that allows people to prove to public venues that they have been vaccinated or have tested negative for COVID-19 recently. A recent meeting of the G7 group of nations, which includes the United States, recently discussed the idea of working together on a vaccine passport system.

Thus far, the Biden administration has stated that they are not going to issue any vaccine passports or mandate them for U.S. citizens. “The government is not now, nor will we be supporting a system that requires Americans to carry a credential,” Press Secretary Jen Psaki told reporters at an early April briefing. “There will be no federal vaccination database and no federal mandate requiring everyone to obtain a single vaccination credential.”

Maybe so, but the federal government is assisting the private sector by setting standards for vaccine passports that they, reportedly, will never mandate.

“We’re leading an interagency process right now to go through these details and that some important criteria be met with these credentials. Number one is that there is equitable access. That means whether or not people have access to technology or whether they don’t,” said Andy Slavitt of the White House COVID-19 Response Team.

So, unsurprisingly, the Biden administration is talking out of both sides of their mouth on the issue of vaccine passports. They won’t “mandate” them, but at the same time want everyone to have access to them.