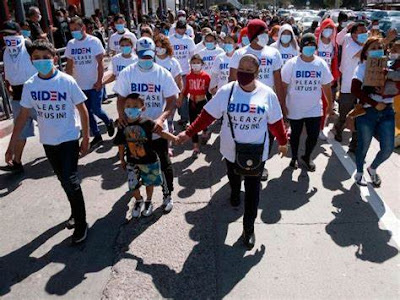 With the recent damning numbers regarding the border surge being released, with a handy little chart that shows the extreme and massive rise in numbers from 2020 to 2021 to date, one has to wonder if the Associated Press (AP) will revise their new rules to refuse calling the situation a “crisis,” as they had no problem with reporters doing when Trump was in office.

Quick flashback to the AP’s recent guidelines for their reporters, via a leaked memo:

Here are some tips to language to use and not use:

“Crisis” The current event in the news — a sharp increase in the arrival of unaccompanied minors — is a problem for border officials, a political challenge for Biden and a dire situation for many migrants who make the journey, but it does not fit the classic dictionary definition of a crisis, which is: “A turning point in the course of anything; decisive or crucial time, stage, or event,” OR “a time of, or a state of affairs involving, great danger or trouble, often one which threatens to result in unpleasant consequences [an economic crisis] —SYN. Emergency.”

Therefore, we should avoid, or at the least, be highly cautious, about referring to the present situation as a crisis on our own, although we may quote others using that language.

Relevant part of the memo below (Image). 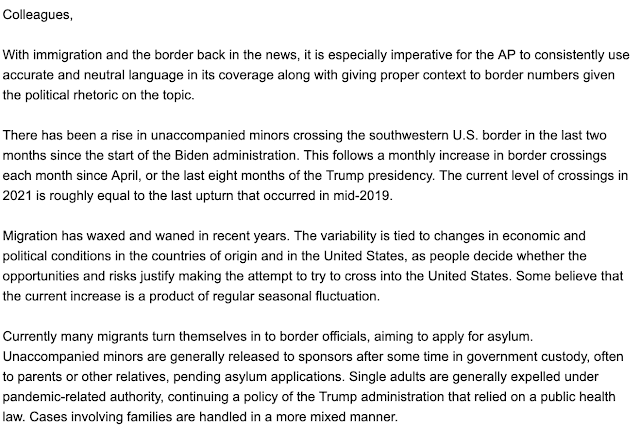 Breitbart provides the numbers and comparisons between 2020 and 2021 so far.

Liberal media pundits, such as Washington Posts’ “Fact Checker” Glenn Kessler, are “feigning shock,” over the lies being told by the Biden regime, to which Kessler refers to as the “White House line,” because these liberal journalists do not seem to be capable of uttering the word “lies,” in reference to Biden and Co.

Once the numbers and charts were released it became almost impossible to hide them from the public, so it was time to act all shocked at the level of incompetence and lies being told to Americans.

Kessler shares the chart, shown below, with the statement, “Well, I guess the Biden White House line that this is the usual annual migration surge at the border is no longer operative.”

It never was operative.

Here is the chart he shared, after others had already shared it of course: 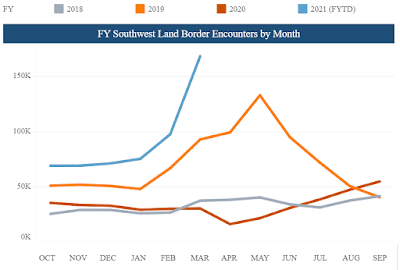 So much for the claim that this is just the “normal” surge.

BIDEN ASKED FOR IT
Perhaps Glenn should have also pointed out that the numbers wouldn’t be this high, had Biden himself not invited illegal aliens to come to America for asylum.

They’ve been insisting, rather frantically, that the chaos we’re seeing on the border didn’t just begin on Jan. 20, the day Biden was inaugurated. I agree. It did not begin in January.

It began earlier as Biden was campaigning for the presidency.

Remember, Biden was desperate to win support of the hard left that now runs the Democratic Party, eager to out-Bernie Bernie Sanders, driven to secure the favor of the progressives who now run his administration, whether he realizes it or not.

It was Biden who called for the surge. And desperate migrants heard his call as a promise that his arms would be as wide open as our southern border. His wish came true.

Now Biden owns it. All of it.

Biden’s exact words were “What I would do as president is several more things, because things have changed. I would, in fact, make sure that there is, we immediately surge to the border — all those people are seeking asylum, they deserve to be heard. That’s who we are. We’re a nation who says, if you want to flee, and you’re freeing oppression, you should come.”