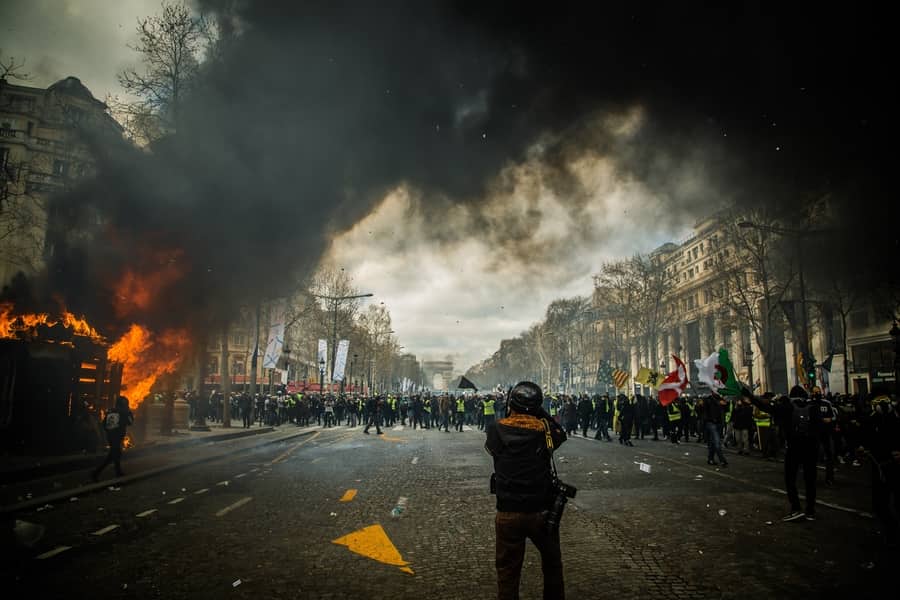 As the world seems to be on fire in countries across the planet, the threat of civil unrest and riots certainly feels like it’s increasing. People are responding with rage to perceived injustices, and whether that rage is warranted or not isn’t the point of this article.

Often when I write about surviving events like mass shootings or riots, people scoff and say, “That was a false flag perpetrated by government operatives” or “Those people got paid by [insert evil billionaire here.]” The simple fact you must understand is that it doesn’t matter who started it, who paid for it, who instigated it, or who is taking part in it. If you find your city or town under siege by irate protesters, none of those things matter at the moment. These are things to be sorted out later.

What matters is how to survive and how to keep your loved ones safe. What we witnessed via social media of the riots in Chile should be enough to make anyone want to be prepared.

The idea of an angry mob appearing in your neighborhood is a frightening one but understanding more about the patterns of civil unrest can make it feel a bit more manageable.

It’s extremely important to understand how speedily riots can occur. In his newsletter, Simon Black of Sovereign Man wrote of his ties to Chile. He shared an eyewitness account.

…this past Friday was a particularly beautiful day. By lunchtime, people were out in the parks enjoying the weather. It was calm, peaceful, and joyful.

Within a matter of hours the city had turned into a war zone. Hours.

One of my team members told me on the phone yesterday, “If you had said on Friday afternoon that Santiago would be in chaos by nightfall, I would have laughed… And then it happened.” (source)

Never underestimate the power, rage, and motivation of a mob. Never think it can’t happen where you are.

Civil unrest can be predicted to some degree. Jose shared some of the warning signs he has observed and they all share their part in this pattern.

Here’s how a protest turns into a riot:

Tess Pennington wrote about societal breakdowns in more detail – read her excellent article for more information on these predictable scenarios.

The mob mentality and Freud

Some people are just waiting for the opportunity to behave in this fashion. They’d love to act like that every single day, but they don’t want to spend the rest of their lives in jail. But when a verdict gets rolled out, when a storm takes out the power, when a disaster strikes, they delight in the chance to rob, pillage, loot, and burn.  Who can forget the day before Superstorm Sandy hit the East Coast, when thugs were coordinating looting rampages via Twitter?

I remember learning about “sublimation” in a high school psychology class.

Sublimation is a defense mechanism that allows us to act out unacceptable impulses by converting these behaviors into a more acceptable form. For example, a person experiencing extreme anger might take up kickboxing as a means of venting frustration. Freud believed that sublimation was a sign of maturity that allows people to function normally in socially acceptable ways. (source)

If you believe Freud’s theory, then it’s easy to see that many people look for an excuse to revert to their true natures.  In a situation where “everyone” is doing something, they are able to cast off the normal control of their impulses without much fear of reprisal. The number of looters and thugs far outstrip the number of arrests in most situations, so there’s a very good chance that someone swept up in that mentality can go burn somebody else’s home or business and completely get away with it.

In his course, One Year in Hell, Selco recounts how quickly and shockingly the SHTF in his Bosnian city. He explains that any time a group of people becomes violent, it’s possible for it to turn into a longer-term event than just a few rough days. In this article he talks more about mob mentality, and here’s his on-demand webinar about the topic of unrest and riots.

Remember in 2015 when Baltimore, Maryland was a war zone? It may have given you a sense of deja vu, flashing back to the fall when Ferguson, Missouri was under siege. We’ve seen riots in Sacramento, California; Milwaukee, Wisconsin (which the media lied about); Charlottesville, Virginia; Portland, Oregon; and all over the nation after the presidential election in 2016.