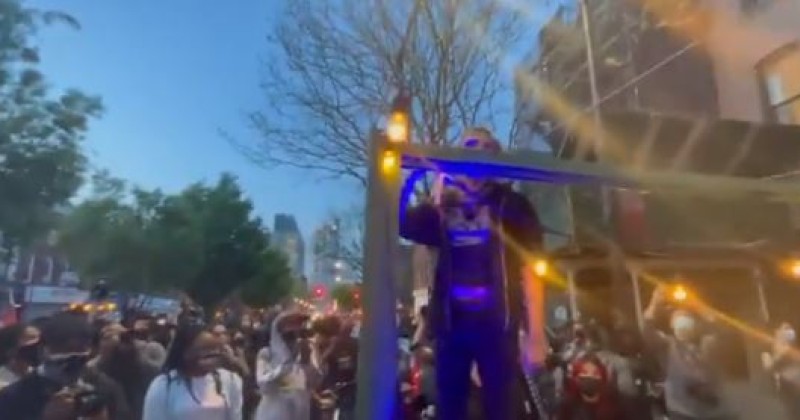 Mob also suggests taking 30 per cent of their income.

BLM protesters in New York reacted to the Derek Chauvin verdict by harassing diners and demanding white owners of restaurants “get the f**k out” of the city.

Unruly protests broke out in numerous major cities last night despite Chauvin being convicted on all counts.

A video shows BLM agitators yelling at diners, “Get the f**k out of New York! We don’t want you here.”

the protest turns it’s sights on sidewalk diners as the crowd chants, “get the fuck out of new york, we don’t want you here.” they then make references to it being owned by white people and gentrifiers.#JusticeForGeorgeFloyd #ChauvinTrial #BlackLivesMatter pic.twitter.com/y3bxgKNaRe

The group later marched across Manhattan Bridge while chanting “one solution, revolution” as they carried a banner displaying bloody hand prints and the words “abolish the NYPD.”

“one solution, revolution!” is chanted by the group as they cross The Manhattan Bridge. a sign displaying bloody handprints and the phrase ‘abolish the NYPD’ leads the protest.#JusticeForGeorgeFloyd #chauvinverdict #BlackLivesMatter pic.twitter.com/gecEXDSnNU

Harassing people who are trying to eat their dinner has become a specialty of Black Lives Matter since the start of last summer.