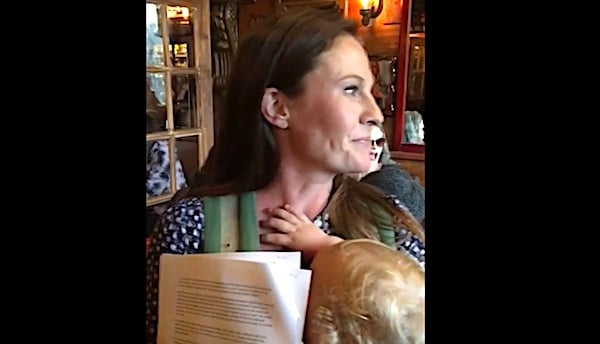 In the second case from this past weekend, video shows health authorities being booted of a building courtesy of loud shouting from people objecting to their presence.

The latest confrontation took place at the Corduroy restaurant in Vancouver, British Columbia, which allegedly was at odds with the current COVID-19 safety guidelines banning indoor dining in the Canadian province.

The video depicts two health inspectors speaking with the restaurant’s owner, Rebecca Matthews. No one inside the eatery appeared to be wearing face masks, except for the government officials.

“Who do you work for?” Matthews asked the inspectors.

“You see the signs on the door there,” she continued. “You understand what you’re doing here? You’re trespassing on my private property.”

The health inspector didn’t agree he was trespassing, and that’s when the crowd at the restaurant began chanting in unison, “Get out! Get out!”

The authorities departed, but according to CTV, officials ordered the restaurant to fully close.

“I’m frustrated at the behavior here,” health minister Adrianm Dix told CTV. “The behavior is what’s in question here, and there’s no illusion. No one misunderstands the rules. Indoor dining is not allowed right now in British Columbia.”

Matthews made no mention of the forced closure in a comment on Instagram, merely stating they had run out of food and would reopen this week.