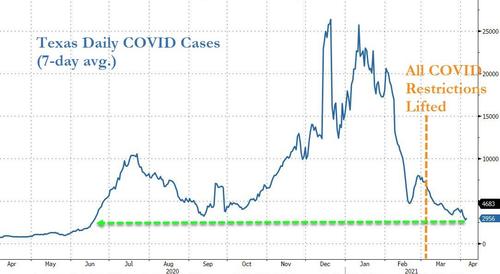 More than a month has passed since Texas Gov. Greg Abbott shocked the Faucis of the world by scrapping COVID-inspired restrictions on businesses and individuals, including removing the mask mandate. The decisions prompted Dr. Anthony Fauci and legions of public health “experts” to warn about the devastating consequences – thousands of unnecessary deaths would result, they said – however, as the data show, practically every metric has shown that the Lone Star State’s outbreak has continued to recede, even as blue states like Michigan are seeing a new surge in infections (believed to be driven by “mutant” strains).

As epidemiologists everywhere have struggled to come up with an explanation, it’s worth noting that Texans are dining out more, according to Opentable seatings, which have become a closely watched proxy for post-quarantine economic activity.

As experts have struggled to come up with a satisfying answer, Dr. Fauci was asked about the phenomenon during an interview on MSNBC Tuesday morning as the senior advisor to President Biden made the rounds. As MSNBC noted, “if you go to Texas…it looks like 2019… the restaurants are full…the ballparks are full…” and yet, cases have continued to tick downward.

#Drfauci on #Texas #covid cases dropping despite ignoring his advice on masks social distancing. #Fauci I think we’re as sick of you as we are of the #pandemic #maskthis pic.twitter.com/knziX9fjfd

Dr. Fauci seemed dumbfounded. He first suggested that the surge in cases simply hadn’t manifested yet because of a “lag”. That might have made sense if the trend had only been in place for a week or two. But a month has passed, and Texas’ positivity rate – the share of new tests that yield positive results, seen as a more accurate representation of community spread – has continued to fall.

“It can be confusing because you may see a lag or a delay, because often you have to wait a few weeks…there’s a lot of things that go into that,” Dr. Fauci said.

“I’m not really sure, it could be because they’re doing things outdoors, you know it’s very difficult to just one-on-one compare that…I hope they continue to tick down, if they do that would be great. But there’s always the concern that when you pull back on methods, particularly things like indoor dining, or bars that are crowded…you could see a delay, then all of a sudden cases tick back up.”

“We’ve been fooled before with places opening up, then nothing happens, but all of a sudden a few weeks later cases explode on you.”

He concluded by saying “we’ve got to be careful we don’t prematurely judge” the situation in Texas.