Democrats Use Former DoJ Official to Extort Wealthy of Family Trump-Supporting Member of the U.S. House of Representatives

This sordid tale shows just how determined the Democrats are to get rid of the most conservative members in the US House of Representatives, especially those who are avid Trump supporters. 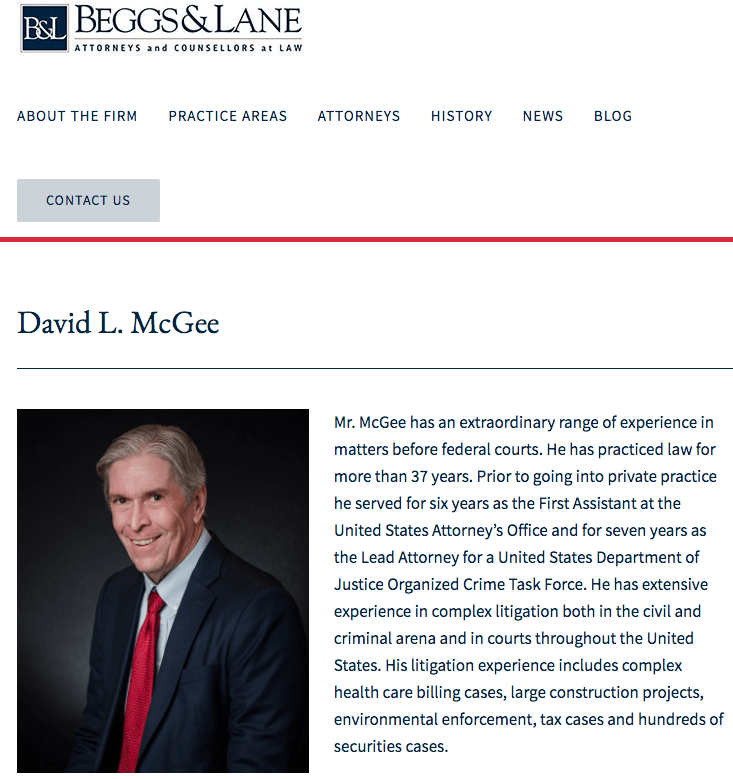 DAVID MCGEE INCRIMINATED BY REP. MATT GAETZ
FOR AN ATTEMPT TO EXTORT $25 MILLION FROM
HIS FAMILY AND MALICIOUS SMEARING OF HIS NAME

This sordid tale shows just how determined the Democrats are to get rid of the most conservative members in the US House of Representatives, especially those who are avid Trump supporters.

This complex criminal conspiracy carried out by the Biden Administration, Democrat Party, Deep State and U.S. Military Intelligence Community is as bad as it gets … especially because they got caught.

Although the facts are still being slowly disclosed, the rough outline of this shocking case of extraordinary corruption and criminality at the highest echelons of the US government clearly indicates an extraordinarily convoluted plot to take down a very conservative, Trump-supporting U.S. Congressman.

It’s critical to correctly understand the proper context here: the communist-run Democrat Crime Syndicate totally owns and operates the U.S. Federal Government … and they know it.

This extremely unfortunate reality translates to a hardening Democrat MO that reflects the stark reality that they can get away with any naked crime spree, any wave of transparent corruption or any pattern of illicit conduct.  The stolen 2020 POTUS election is the best evidence of the unparalleled impunity that the Democrat Party now enjoys.

Let’s face it: When any thoroughly corrupt political party completely controls both the entire Mainstream Media and Law Enforcement at all levels, what criminal activity can’t they get away with?!

If there is one member of the U.S. House of Representatives that the Democrats and RINOs want kicked out of Congress, it’s the unusually straightforward Matt Gaetz.

The exceedingly courageous representative from the very conservative Florida Panhandle really sealed his fate when he showed up in the Wyoming capital, on his own dime, to rightly excoriate RINO Liz Cheney for her betrayal of President Trump.  She voted for Trump’s second impeachment knowing full well that imposters Joe Biden and Kamala Harris outright stole the election.

The crucial point here is that Rep. Gaetz has been quite bravely outspoken about the unprecedented level of corruption on the part of the utterly deprave Democrats as well as the many crooked Republicans.

In light of these indisputable facts of political life, the DEMs and Deep State were out to get Gaetz and remove him from the Congress—FOREVER!

So, what did they all do: they colluded to hatch a plot so brazen, so reckless, so desperate that it smacks of the same chutzpah that the Democrats possessed to execute the epic 2020 election heist.

The following excerpt provide some of the most basic details of this criminal conspiracy to extort a US Congressman’s family that will surely develop into the “Democrat Scandal of the Year” — EXTORTIONgate!

They asked his dad, Don Gaetz, for money to be used to free Levinson — in exchange for somehow getting the Department of Justice to drop its reported sex trafficking probe into the lawmaker, according to the Examiner.

Levinson, a former FBI agent and CIA contractor who vanished in Iran in 2007, was declared dead by his family last year.

The men who approached Gaetz’s dad had no apparent connection to the sex-crimes investigation but somehow learned about it before it was made public, The Washington Post reported.

The Examiner on Wednesday published a text message and a document that purport to show their proposal to the elder Gaetz, a prominent Florida Republican.

They show that Kent, a former Air Force intelligence analyst, allegedly texted Don Gaetz in mid-March saying that that he had a plan that could make his son’s “future legal and political problems go away,” and claiming that Levinson was still alive.

“I would like to talk with you immediately about the current federal investigation, and the indictment that is about to be filed against your son. I have a plan that can make his future legal and political problems go away,” the alleged text states.

“Last summer, we located Robert Levinson in Iran and took two proof of life videos, but the U.S. government foiled our rescue attempt. We have one more opportunity to rescue Levinson.”

The next day, Don Gaetz allegedly met with Kent, the Examiner reported, and he handed over a three-page document titled “Project Homecoming” that detailed the alleged federal probe against Matt Gaetz and how he could get out of it, as long as he coughed up $25 million.

The first page of the document, published by the outlet, is riddled with grammatical errors and claims the congressman is being investigated by the FBI for “various public corruption and public integrity issues.”

“Our strategy for Congressman Gaetz to mitigate his legal, and political, troubles would be for him, or someone else, to arrange for the funds required to obtain the immediate release of Robert Levinson from captivity in Iran,” the document states.

“In exchanged for the funds being arranged, and upon release of Robert Levinson, Congressman Gaetz shall be given credit for facilitating the release of Mr. Levinson… [he] shall also be on the plan that returns Mr. Levinson to freedom and shall be the person to ‘reunite’ Mr. Levinson with his family and being Mr. Levinson back to the United States.”

Don Gaetz contacted the FBI about the proposal and the agency is now investigating whether it constitutes an extortion attempt against the Gaetz family, according to the Washington Post.(Source: Sheer Depth and Breadth of Democrat’s Extortion Plot Against Gaetz Family Is Staggering)

Exactly how does military intel fit into this complicated scheme to falsely bring down a highly respected U.S. Congressmen?  As follows:

The mystery man at the center of Florida Republican Rep. Matt Gaetz’s charges that he was the target of an extortion scheme to make sex trafficking charges go away is a former U.S. Air Force intelligence officer with business interests in the Middle East who has been obsessed for years with rescuing former FBI agent Robert Levinson from Iran.

U.S. intelligence concluded years ago that Levinson, an FBI organized crime expert who disappeared in March 2007 during a covert CIA mission on Iran’s Kish Island, had died in custody, either in Iran or in the hands of Islamic militants. Levinson’s family accepted that finding last year.

But Bob Kent, an Air Force “special tactics/intelligence officer” from 2000 to 2007, remained undeterred. He never believed Levinson was dead and in 2018 began assembling a network of Iranian exile sources in Iraq, where he’s been involved in the oil business, to gather information on Levinson’s whereabouts and medical condition. Kent had also been an intelligence contractor with the U.S. government in Afghanistan, according to his LinkedIn page.

His sources had contacts inside Iran’s security organs, Kent told me three years ago when I was preparing a story for Newsweek on his and other private efforts to rescue Levinson. He showed me interor ministry and other security agency documents he’d obtained, which upon expert examination turned out to be a mix of clumsy fabrications and authentic papers of unconfirmed provenance. He now claims to have “proof of life” videos that the FBI says are “inconclusive.”

Back in 2018 he and his associates told me that men “with CIA connections” had offered to pay his Iranian helpers $100,000 for a proof-of-life package, including fingerprints and a blood sample and what he and Kent’s associates claimed was a recent, 41-second video clip of Levinson. “Another $150,000” would be needed “for the rescue,” Kent told me. But just as he was preparing to leave for the Middle East on Dec. 10, 2018, with $250,000 cash in hand for payoffs, he said, the federal government short-circuited the caper over sanctions issues related to Iran

“I received a phone call informing me that the funding was withdrawn because the State Department and/or FBI threatened my sponsors” with prosecution, Kent told me.

Three years later, according to reports this week, Kent went looking for funding for another Levinson rescue mission, this time from Matt Gaetz’s father, a wealthy Florida businessman. According to copies of messages obtained by the conservative Washington Examiner newspaper, Kent told Don Gaetz that he could make his son’s “future legal and political problems go away” if he backed a rescue plan that would end up wrapping his son in wreaths of glory. Kent allegedly told the elder Gaetz that he would give his congressman son “credit for the operation” and help arrange “a presidential pardon for unnamed legal issues” if he put up $25 million for the operation, according to the newspaper.
(Source: Former Air Force Intelligence Officer Plays Prominent Role in $25 MIL Extortion Attempt of Gaetz Family)

KEY POINTS: First, this incredibly bold extortion attempt revolves around a single fabricated sex allegation involving Rep. Gaetz which simply never happened.  Secondly, all of the major organs of propaganda and prevarication throughout the CIA’s Mockingbird Media are only publishing that fictitious piece of the black operation.  The New York Times went so far as to leak the information about the FBI’s extortion investigation in order to greatly undermine that secret probe.  That’s called OBSTRUCTION OF JUSTICE, and it represents an unambiguous case of a criminal complicity by the NYT as well as a stone-cold criminal cover-up. See: New York Times Leaked a Highly Sensitive Probe of Former DoJ Official to Undermine the FBI Investigation