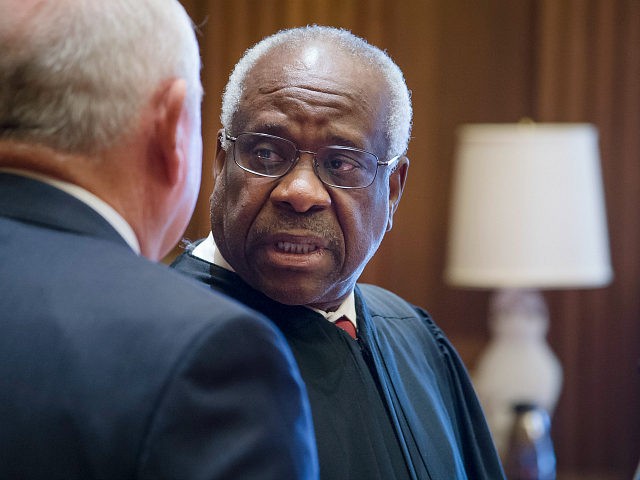 Supreme Court Justice Clarence Thomas today outlined a detailed legal argument for why social media companies might need to be subject to strict rules forbidding them from denying service to users for any reason or no reason, including the possibility of designating them as common carriers — which would effectively eliminate their ability to ban or censor users for legal, First Amendment protected speech.

Thomas outlined his opinion in a concurrence to reject a case that began under the Trump administration, challenging the President’s right to block users from his Twitter feed.

However, Thomas indicated that the Supreme Court will soon have to address the issue of tech censorship.

“We will soon have no choice but to address how our legal doctrines apply to highly concentrated, privately owned information infrastructure such as digital platforms” wrote Thomas.

Such a case would likely encompass many of the complaints brought by conservatives against social media companies. Social media censorship has intensely escalated over the past few years, with targets of bans and censorship including elected officials like President Trump, political candidates like Laura Loomer, and news organizations like Breitbart News and the New York Post.

Today’s digital platforms provide avenues for historically unprecedented amounts of speech, including speech by government actors. Also unprecedented, however, is the concentrated control of so much speech in the hands of a few private parties.

The case addressed by Thomas was brought on the basis that the president is a public official, and that his feed should thus be considered a constitutionally protected public forum, therefore implying that the President cannot bar users from his feed via the block feature.

Thomas argued that Twitter’s decision to ban President Trump proved that Twitter, not the President, controlled whether citizens could interact with him.

Despite rejecting the Twitter blocking case, Thomas went on to note many of the issues with social media censorship, and suggested that tech platforms might be considered common carriers or places of public accommodation, both of which are tightly restricted in their ability to deny service.

If part of the problem is private, concentrated control over online content and platforms available to the public, then part of the solution may be found in doctrines that limit the right of a private company to exclude. Historically, at least two legal doctrines limited a company’s right to exclude.

Justifications for these regulations have varied. Some scholars have argued that common-carrier regulations are justified only when a carrier possesses substantial market power. Candeub 404. Others have said that no substantial market power is needed so long as the company holds itself out as open to the public. Ibid.; see also Ingate v. Christie, 3 Car. & K. 61, 63, 175 Eng. Rep. 463, 464 (N. P. 1850) (“[A] person [who] holds himself out to carry goods for everyone as a business . . . is a common carrier”).

And this Court long ago suggested that regulations like those placed on common carriers may be justified, even for industries not historically recognized as common carriers, when “a business, by circumstances and its nature, . . . rise[s] from private to be of public concern.” See German Alliance Ins. Co. v. Lewis, 233 U. S. 389, 411 (1914) (affirming state regulation of fire insurance rates). At that point, a company’s “property is but its instrument, the means of rendering the service which has become of public interest.” Id., at 408.

This latter definition of course is hardly helpful, for most things can be described as “of public interest.” But whatever may be said of other industries, there is clear historical precedent for regulating transportation and communications networks in a similar manner as traditional common carriers. Candeub 398–405. Telegraphs, for example, because they “resemble[d] railroad companies and other common carriers,” were “bound to serve all customers alike, without discrimination.” Primrose v. Western Union Telegraph Co., 154 U. S. 1, 14 (1894).

In exchange for regulating transportation and communication industries, governments—both State and Federal—
have sometimes given common carriers special government favors. Candeub 402–407. For example, governments have
tied restrictions on a carrier’s ability to reject clients to “immunity from certain types of suits”3 or to regulations that
make it more difficult for other companies to compete with the carrier (such as franchise licenses). Ibid. By giving these companies special privileges, governments place them into a category distinct from other companies and closer to some functions, like the postal service, that the State has traditionally undertaken.

Second, governments have limited a company’s right to exclude when that company is a public accommodation.
This concept—related to common-carrier law—applies to companies that hold themselves out to the public but do not
“carry” freight, passengers, or communications. See, e.g., Civil Rights Cases, 109 U. S. 3, 41–43 (1883) (Harlan, J.,
dissenting) (discussing places of public amusement). It also applies regardless of the company’s market power. See,
e.g., 78 Stat. 243, 42 U. S. C. §2000a(a).

Thomas went on to say that there is a strong case for lawmakers in Congress to impose restrictions on the ability of social media platforms to censor their users.

The Second Circuit feared that then-President Trump cut off speech by using the features that Twitter made available to him,” wrote Thomas. “But if the aim is to ensure that speech is not smothered, then the more glaring concern must perforce be the dominant digital platforms themselves. As Twitter made clear, the right to cut off speech lies most powerfully in the hands of private digital platforms.