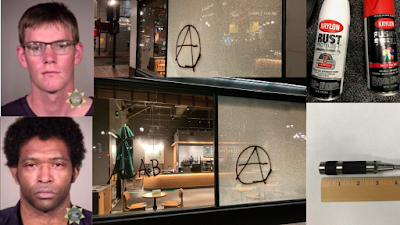 Sometimes one just has to simply shake their heads in wonder over some of the current reports, and when seen in conjunction with other related pieces of news, it becomes apparent that much of America has simply gone crazy.

BLM and Antifa are offending not just non-violent citizen observers, but they are also offending the actual black communities they are destroying!

Example, Portland, Oregon, where Antifa groups have spent years rioting, taking over the streets right in front of law enforcement, who are under orders to stand down, destroying businesses and generally terrorizing the entire city.

Interestingly, Portland Antifa will claim that they are supporting Black Lives Matter (BLM) and the black community when the burn stuff down, vandalize, loot and leave their paths of destruction behind them, yet leaders of  Black Libertarian has just made it clear they are sick and tired of Antifa’s antics.

In the open letter they refer to “allies” and “opportunists,” which most likely means both Antifa (opportunists) and BLM (so-called allies).

The letter can be found here, and a portion is shown below:

Black people are not a monolith, and having a complicit Black person in your planning space does not indicate support from the Black community. For decades, efforts towards Black Liberation have suffered at the hands of both well-meaning allies and predatory opportunists, and over the last year we have watched as people have profited from and damaged our movement without our consent or approval.

Revolutionary times call for revolutionary measures, but success requires thoughtful action. Actions that neither increase solidarity nor broadcast purpose while making the lives of local Black communities more difficult are not acceptable.

Perfect examples of what they are talking about came on April 20-21, when Antifa “protesters” aka rioters caused nearly $20,000 in damage to NE Portland Boys and Girls Club after the Derek Chauvin guilty verdict was announced, according to the Oregonian.

The Boys and Girls Club, which is closed Tuesday as it undergoes repairs, was one of several buildings damaged during Monday night’s protest, which saw about 80 people marching from Woodlawn Park to the Portland Police Bureau’s North Precinct. Last night’s event was one in a string of recent protests that have culminated in vandalism and police declaring an unlawful assembly.
After 9 p.m., protesters began marching south along Martin Luther King Jr. Boulevard toward the North Precinct, across the street from the Boys and Girls Club. Along the way, some in the crowd smashed windows and caused damage to a Popeye’s restaurant, a U.S. Bank building and an ATM.
As they marched, Portland police warned people to not engage in criminal activity and that they could be subject to arrest, use of force and munitions. Police declared an unlawful assembly just before 10 p.m. and ordered the crowd to disperse to the north.
After standing briefly outside the North Precinct, the crowd eventually began marching south along MLK, with some people causing damages to a Natural Grocers. The group turned onto Prescott Street before dispersing, police said

(Note– Many predicted there would be riots and damage no matter what the verdict was.)
Another case in point: As Antifa rioted throughout Portland yet again, as police declared unlawful assembly because businesses were being vandalized and damaged, one Antifa member decided to suck-punch a cop, video below.


Even Portland cops are sick and tired of these thugs.

Oh, speaking of thugs, here are some of the mug shots of some arrested during the Duante Wright protests this month in Brooklyn center, showing those “predatory opportunists,” are not just hijacking protests in Portland, but elsewhere as well.