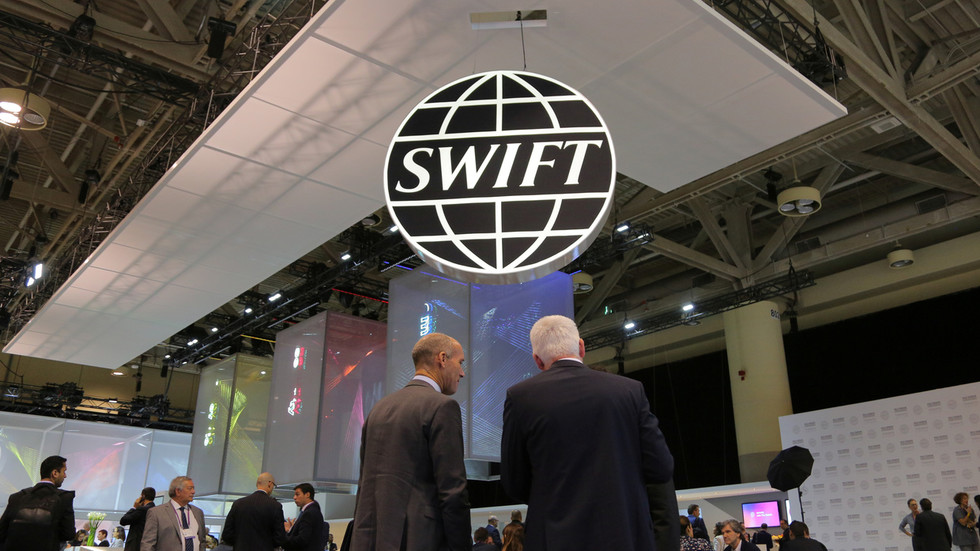 Ukraine has requested that the European Union consider the possibility of disconnecting Russia from SWIFT, the international system of transfers between banks, suggesting that the measure be added to a new package of sanctions.

Moscow has previously warned it would consider the move “a declaration of war.” Former Prime Minister Dmitry Medvedev, who now serves as the deputy chairman of the Security Council of Russia, has also dubbed it a “punch in the gut.”

Ukrainian Foreign Minister Dmitry Kuleba told Reuters on Wednesday that he personally brought up the idea with his counterparts from the EU. Kuleba believes this measure could be used to deter Moscow in event of the situation in eastern Ukraine escalating.

“If Russia decides to launch another wave of its open military aggression against Ukraine, a new round of sectoral sanctions – including for example banning Russia from SWIFT and these kind of things – should be immediately imposed on it,” he told Reuters.

SWIFT is an international, interbank messaging system, used by financial institutions to quickly and securely send information, such as instructions to transfer money. Removing Russia from this facility has been proposed as a potential sanction since 2014, in response to Moscow’s alleged role in the Donbass conflict. Still, it seems to have never been seriously considered.

Cutting Russia off from SWIFT would be a serious escalation of the sanctions regime. In fact, in 2018, the then-US special representative for Ukraine, Kurt Volker, called it the “nuclear option.”

Though aimed at punishing Moscow, removing Russia’s access to SWIFT would also have severe consequences for Kiev. Ukraine makes billions of dollars each year from transporting Russian gas, all paid through the international banking mechanism. This sanction would force the two parties to find alternative means, which may have serious costs.

This is an incredibly dumb move from Kiev.

Because if Russia were kicked out of SWIFT, it would have to cease gas deliveries to the European Union (how would they be paid for?).

According to Tom Adshead, director of research at the Macro-Advisory consulting firm, large transactions would likely find a way through, even if Russia was cut off from SWIFT.

However, complications would arise for ordinary citizens, who could find themselves unable to use their credit cards abroad, and may struggle to buy items online.

“Beyond payment cards and online payments, there are thousands of daily transfers between Russian banks and the West that cover all sorts of transactions,” he told RT, citing Russian companies paying their employees abroad as an example.

In Moscow, however, after seven years of threats, Russia is now in a position where losing access to SWIFT would be a major, but no longer disastrous, blow. The country has created its own alternative, called SPFS. Although it only currently works within Russia, there have been discussions with many other countries, such as Moscow’s BRICS allies, to integrate the system internationally. In particular, there are plans to integrate SPFS with CIPS, China’s own financial network.