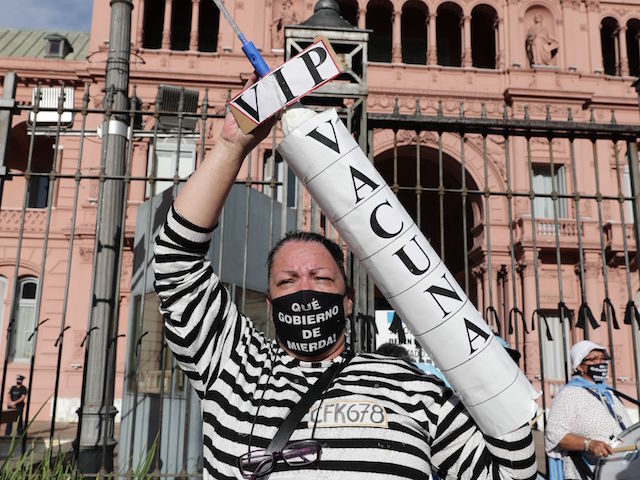 The Chinese coronavirus pandemic has allowed dozens of countries around the world to expand the power of their central governments, presumably to protect populations and facilitate processes like mass vaccinations.

Not all that power has fallen into good hands, however, leading several presidents and senior government officials to have to explain the disappearances of gigantic emergency funds, the vaccination of seemingly healthy but well-connected people over the elderly and infirm, and other perks that materialized for politicians while average citizens were largely left to fend for themselves.

Peruvian Foreign Minister Elizabeth Astete, in charge of coordinating with the international community to import vaccines against the Chinese coronavirus, and Deputy Health Minister Luis Suárez Ognio were forced to resign in February after admitting they personally received a dose of a vaccine candidate by the Chinese firm Sinopharm illegally, prior to Lima authorizing citizen vaccinations. They were, President Francisco Sagasti admitted then, part of a group of nearly 500 senior government officials and associates who illegally vaccinated themselves, cutting a line Peru’s health workers should have been at the front of.

“We reiterate our indignation and disappointment after being informed that 487 people, including many senior officials, took advantage of their position to be immunized with the Sinopharm vaccines, which came as a complement to those used in clinical trials in our country,” Sagasti, the third president Peru had in 2020, said in a televised address.

Among those vaccinated were ousted President Martín Vizcarra and the former first lady.

“As a result of the recent disclosure about the vaccination of (former) President Vizcarra and his wife, as well as the understandable impact that this news had on public opinion, I am aware of the serious mistake I made, which is why I decided not to receive the second dose,” Astete said in a statement apologizing for receiving the dose. By abstaining from the second dose, she would have to wait for Peru to expand vaccine eligibility to healthy people in her age group and would be treated as a non-vaccinated person, making the improperly acquired shot a waste.

Argentina, like Peru, faced what would become known in the former country as the “VIP vaccination” scandal. In March, local media obtained a list of 70 people — many of them healthy and as young as 27 years old — who had received off-the-books doses of vaccinations against Chinese coronavirus. The socialist government of President Alberto Fernández had recently contracted for doses of the Russian product “Sputnik V” but had yet to make it widely available when the dozens of VIPs received their doses. At the time, only health workers could legally obtain vaccines.

Fernández distanced himself from the scandal and urged Health Minister Gines González García to resign.

The scandal prompted nationwide protests, including traditional protests featuring the banging of pots and pans and the display of false “body bags” before the doors of the Pink House, Argentina’s presidential offices.

Unlike many world leaders, Philippines President Rodrigo Duterte is an at-risk patient for complications from a Chinese coronavirus infection. Duterte is 76 years old and suffers from several chronic ailments. His administration has faced intense criticism not because he received a vaccination early, but because it remains unclear if he received one or if he intends to do so.
While Duterte’s office gives reporters confusing information regarding his vaccination status, Manila was forced to admit in January that members of the Philippines’ Presidential Security Group (PSG), responsible for Duterte’s protection, illegally smuggled Sinopharm vaccines into the country for personal use. The Duterte government had at the time not authorized the use of any vaccine product against the Chinese coronavirus.

Defense Secretary Delfin Lorenzana emphasized that the vaccines were “smuggled” in and illegally present in the country, meaning the officers had partaken in drug trafficking. While Duterte won his 2016 presidential campaign vowing to kill all drug traffickers, it is unclear if anyone in the PSG has suffered consequences for the incident.

“I’ll say it, many here were already injected with Sinopharm. … I have to be frank, I have to tell the truth. Many were vaccinated and up to now, I haven’t heard anything for the select few, not all soldiers, because it’s not policy yet,” Duterte later admitted.

Duterte and his representative staff have insisted that he will not receive a vaccine dose publicly, leading many to speculate that he was among those illegally vaccinated in January. At the time, spokesman Harry Roque claimed Duterte did not want to receive his vaccine in public because he was insisting on being “injected in the ass,” which is not a common or recommended way to administer any coronavirus vaccine currently in use.

More recently, Duterte claimed he was not receiving a vaccine at all because “most of the senior citizens are no longer that productive.”

Kenya has conducted what experts consider to be one of the worst government responses to the Chinese coronavirus pandemic, described by Qatari outlet al-Jazeera as being “hampered by outright cheating, confusion and profiteering.”

Kenya’s government agreed in March to receive 24 million doses of a mix of two American vaccines — by companies Pfizer and Moderna — and the European vaccine by firm AstraZeneca from the World Health Organization (W.H.O.)’s COVAX plan. The plan helps developing countries obtain vaccines they could not afford on their own.

By the end of the month, reports began circulating that major hospitals around the country had begun charging as much as $73 dollars for doses of the Russian Sputnik V, registering people for appointments for profit. Nairobi denied that it had approved Sputnik V or imported any doses, much less given them to private health facilities to sell for a profit. The head of immunization at Kenya’s Health Ministry claimed that he was “not aware of Sputnik V vaccine’s existence in the country.”

Adding to the confusion, the Pharmacy and Poisons Board (PPB) of the country, which approves drugs, did state it had approved the imports of the vaccine “but not distribution,” leaving unclear if any doses had come from Russia at the time and, if so, how private hospitals had obtained them over the government. The matter remains under investigation.

Al-Jazeera noted in its analysis that, unlike the secret vaccinations in Peru and Argentina, the arrival of COVAX doses heralded in a way of Kenyan elite posting themselves receiving vaccines on social media, despite being ineligible officially.

“Soon the elite, including politicians, captains of business, government officials and even journalists, were flooding social media with tales of their queue-jumping exploits and experiences, safe in the impunity that has always shielded them from accountability,” the outlet recounted. “This — as their elders endured long lines following a last-minute government decision to fast-track phase two in recognition of the third wave.”

Like Kenya, Moldova received thousands of doses of coronavirus vaccines from COVAX. Nearly 700 of those doses, which the government had promised to prioritize for the elderly or those with health conditions, went to high-ranking politicians and their relatives, the president of the country admitted in March.

“A first dose of Pfizer-BioNTech has been given to 688 people in the ‘relatives’ category,” Moldovan President Maia Sandu said on television. “This is shameful and it discourages our efforts to obtain more vaccine donations from abroad.”

Sandu specifically condemned members of Moldova’s Defense Ministry for sneaking their family members to the front of the line, prompting the ministry to issue a statement claiming that the people Sandu accused of being vaccinated inappropriately were military health workers, without offering evidence for the claim.