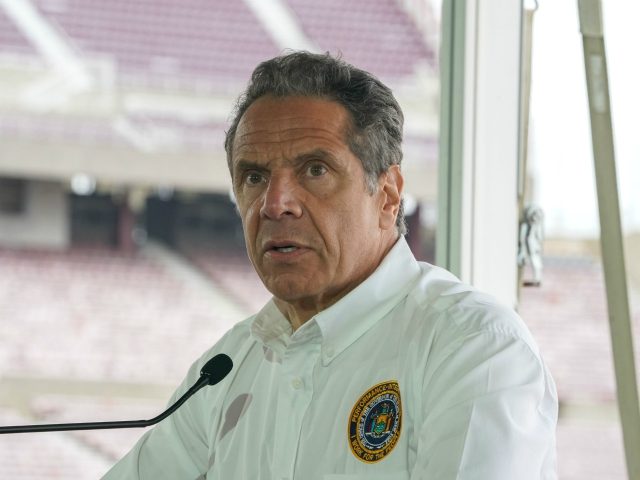 Both the New York Times and the Wall Street Journal reported on Thursday that advisers to Gov. Andrew Cuomo (D-NY) intervened with officials of the New York State Department of Health in July and caused them to underreport the number of COVID-19 deaths in the state at that time by at least 2,800, and possibly more.

The primary purpose of this New York State Department of Health (NYSDOH) report, as initially published July 6, 2020 using the significantly underreported COVID-19 nursing home death data, appears to have been to absolve Gov. Cuomo of responsibility for the dramatic increase in nursing home COVID-19 deaths that took place in the immediate aftermath of his March 25, 2020 order requiring nursing homes to accept COVID-19 positive residents.

But Thursday’s reports in the Journal and the Times serve to undermine the credibility of that absolution for Cuomo, since the underlying data underreported COVID-19 nursing home deaths by at least 40 percent, if not more, during the March 25 to May 8, 2020 time period when COVID-19 positive patients were admitted to nursing homes.

Citing “people with knowledge of the report’s production,” the Journal reported the details in a story titled “Cuomo Advisers altered Report on COVID-19 Nursing Home Deaths: Changes resulted in a significant undercount of the death toll attributed to long-term-care facility residents.”

New York Gov. Andrew Cuomo’s top advisers successfully pushed state health officials to strip a public report of data showing that more nursing-home residents had died of Covid-19 than the administration had acknowledged, according to people with knowledge of the report’s production.

The July report, which examined the factors that led to the spread of the virus in nursing homes, focused only on residents who died inside long-term-care facilities, leaving out those who had died in hospitals after becoming sick in nursing homes. As a result, the report said 6,432 nursing-home residents had died—a significant undercount of the death toll attributed to the state’s most vulnerable population, the people said. The initial version of the report said nearly 10,000 nursing-home residents had died in New York by July last year, one of the people said.

The changes Mr. Cuomo’s aides and health officials made to the nursing-home report, which haven’t been previously disclosed, reveal that the state possessed a fuller accounting of out-of-facility nursing-home deaths as early as the summer. The Health Department resisted calls by state and federal lawmakers, media outlets and others to release the data for another eight months. (emphasis added)

The latest revelation in the expanding Cuomo nursing home scandal comes on the heels of a report last month from the Empire Center for Public Policy that “undermines claims by the New York State Department of Health that Gov. Andrew Cuomo’s (D-NY) controversial March 25 order requiring nursing homes in the state to admit coronavirus-positive residents had no impact on nursing home coronavirus death rates.”

In that report, titled, “COVID-positive Admissions Were Correlated with Higher Death Rates in New York Nursing Homes,” the Albany, New York, based think tank concluded, “The admission of coronavirus-positive patients into New York nursing homes under March 25 guidance from the New York State Department of Health was associated with a statistically significant increase in resident deaths.”

“Statewide, the findings imply that COVID-positive new admissions between late March and early May, which numbered 6,327, were associated with several hundred and possibly more than 1,000 additional resident deaths,” (emphasis added) the Empire Center study found .

The conclusion of the Empire Center study stated:

The data indicate that the March 25 memo was not the sole or primary cause of the heavy death toll in nursing homes, which stood at approximately 13,200 as of early this month [February 2021]. At the same time, the findings contradict a central conclusion of the Health Department’s July 6 report on coronavirus in nursing homes, which said, among other things: “Admission policies were not a significant factor in nursing home fatalities” and “The data do not show a consistent relationship between admissions and increased mortality.”

The Journal reported back in September that Cuomo’s aides reviewed the July report:

State health officials said in a July report that long-term-care facilities were already rife with infection by the March 25 nursing-home order, attributing the spread among patients to employees who brought the virus with them to work.

Senior members of Mr. Cuomo’s staff reviewed and edited the report before it was published, state officials said. The governor’s team also withheld approval for the resumption of nursing-home visitations, people familiar with the matter said, and rejected a Health Department proposal for a regional approach to easing the ban.

A Health Department spokesman said the agency had taken a thoughtful approach that involves “monitoring the data, reviewing reasonable requests and recognizing that this pandemic is not over.” (emphasis added)