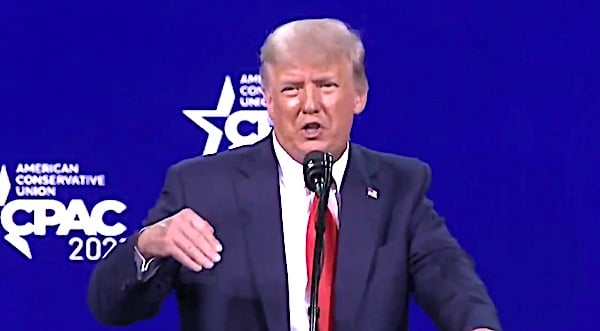 ‘A Republican president will make a triumphant return … who will that be?’

ORLANDO, Florida — Making his first public appearance since leaving the White House, former President Donald Trump on Sunday suggested he may run for president again in 2024.

“But who knows? I may even decide to beat them for a third time,” he said to roaring approval from the crowd.

“I stand before you to declare that the incredible journey that we began together … we began it four years ago. It is far from being over.”

“In the end, we will win,” he maintained. “We’ve been doing a lot of winning.”

Looking ahead to the 2024 presidential election, Trump noted:

“A Republican president will make a triumphant return to the White House, and I wonder who that will be. Who, who, who will that be?”

He again called into question the integrity of the 2020 race.

“We have a very sick and corrupt electoral process,” he stated. “This election was rigged and the Supreme Court … didn’t want to do anything about it.”

Trump said reports that he’d be leading a brand-new political party were nothing more than “fake news.”

“We’re not starting new parties,” he assured. “We have the Republican Party. It’s going to unite and be stronger than ever before.”

Trump hammered the early days of the Biden administration without apologies.