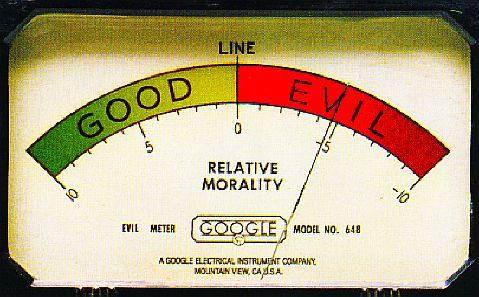 An interesting albeit manipulative proclamation from the control agents atop the Eye of Sauron, Google.  The leading manipulative entity behind the global invasion of privacy is now saying they consider “privacy” a priority. As a result they are moving to stop tracking individual users as part of their business model…

(Via WSJ) […] “If digital advertising doesn’t evolve to address the growing concerns people have about their privacy and how their personal identity is being used, we risk the future of the free and open web,” David Temkin, the Google product manager leading the change, said in a blog post Wednesday.

Let us first be clear… CTH is not suddenly naive enough to believe that Google is now positioning out of some great sense of altruism, magnanimity or business stewardship. That thought is laughable in the extreme.  No, what is really going on here is that the Eye of Sauron has noticed how the Rebel Alliance, within which CTH is a leading insurgency voice, has found ways to tunnel under the technology landscape.

Additionally, both domestic and international patriots are putting laws, rules and regulations into place that are directly adverse to the current business model that Google has been dependent upon for their Ad Revenue services.  There are people working in the background to create regulations on top of the tech industry that are founded on privacy concerns.

In the U.S. Florida Governor Ron DeSantis and the Florida legislature are one group who are heeding the assistance from tech insiders, members of the insurgency, well versed in the roadmap of Google.  There are plans in the works that will cut the tentacles of the Tech overlords.  Google is now being manipulatively proactive in their self-defense.

Outside the U.S. the advancements of privacy regulations are being spear-headed by Australia, Poland, Hungary and subsidiary Rebel Alliance members who are also benefiting from the insider information provided.  The alliance membership grows daily.

Cont… […] Google plans to stop selling ads based on individuals’ browsing across multiple websites, a change that could hasten upheaval in the digital advertising industry.

The Alphabet Inc. GOOG -2.57% company said Wednesday that it plans next year to stop using or investing in tracking technologies that uniquely identify web users as they move from site to site across the internet.

The decision, coming from the world’s biggest digital-advertising company, could help push the industry away from the use of such individualized tracking, which has come under increasing criticism from privacy advocates and faces scrutiny from regulators.

How do we know the Rebel Alliance is making a difference?  Specifically, how do we know efforts of CTH are bearing fruit in our tech push-back…. Because “sandboxing” was a CTH developmental tool, being field tested with tech partners since 2017.

[…] Google says its ad-buying tools will use new technologies it has been developing with others in what it calls a “privacy sandbox” to target ads without collecting information about individuals from multiple websites. One such technology analyzes users’ browsing habits on their own devices, and allows advertisers to target aggregated groups of users with similar interests, or “cohorts,” rather than individual users. Google said in January that it plans to begin open testing of buying using that technology in the second quarter. (read more)

Ironically, and not coincidentally, it appears Google now wants to own the tunneling technology that was created specifically to work around the influence of Google.

It will be interesting to see if the creators of the “privacy sandbox” will stand up to the pressure of Google and avoid the lure of cashing in and selling-out.

‘Sandboxing’ was essentially created as a way to permit alliances of interests to: make privacy a priority, and monetize their on-line content without worrying about the intrusions of Google, and/or the demonetization fear that comes with dependency.

On the positive side of this shift, Google is now recognizing they can only push the limits of their oligarchy and ideology so far….. Eventually there is a secondary system created that works around their control.  So the efforts of the rebel alliance are now inside the boardroom of Google.  There is a disturbance in the force and the emperor is scared.

This public statement by Google, and the subsequent shift in position, is an admission of vulnerability; and remember, once a giant publicly admits their vulnerability people will move-in to exploit it.  We can expect to see more funding into the systems being created by rebel alliance members who need the support to destroy the Eye of Sauron.