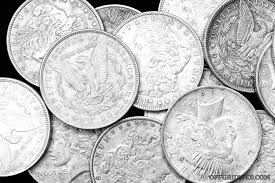 So let us postulate (while we still have time, sanity, and electricity) what that sack of coins might be worth as time crawls on.

The topic of bartering safely, back-room banking, armed protection and hiding places are beyond the scope of this paper and will be saved for another time and venue.

Let’s just speculate as to what a 1960 quarter and a plain 1-ounce 99.9% silver “round” will be worth on a chronological time-line, shall we?! Remember that silver is measured in Troy ounces (12 to a pound) and that this specific quarter is 90% silver instead of 98% copper as today. (According to Coinflation.com, there are 0.4584 pounds of copper and 0.0417 pounds of nickel in $10 face value of the current clad quarters.) By the way, a Troy pound is 373.2 grams.

As I’m writing this (February 2021) silver is at $25 USD per Troy ounce, so we will use that as our baseline. After pondering and evaluating, asking and extrapolating, I guesstimate that a silver round will DOUBLE in the first day. I surmise that it will DOUBLE again the next day. That means it may QUADRUPLE again by the End of the first week! It will then DOUBLE again by the end of the first 30 days. What this really means is NOT that the metals are actually worth more as a hard investment, but that the US dollar has plummeted into worthlessness and it would take a dump truck-full to buy something of value.  (Do you remember reading about the Weimar Republic in Germany when its Papiermark currency hyper-inflated around 1923?). See the graphs below.

Ben Bernanke said on July 18, 2013, “Nobody really understands gold (precious metal) prices, and I don’t pretend to understand them either.” Well, I will sleep better at night now…And what he is trying not to say is that “money” has not been money for a long time…it is DEBT that he ruled over at the FED.

Here are a couple of subjective graphs that I created:

Silver at $1,000 per ounce? This is the part where different people will have different opinions, and that’s okay. You get out a pencil and paper and draw an X and Y-axis and plot some values yourself. Does it look similar to mine, or totally unique? Where do we agree, and where do we differ? How fast do you think Real Money, hard tangible commodities will climb. And how fast will fiat paper currencies de-value? Think hard in real terms of buying bread, rice, beans, canned-goods and gasoline…IF any is even available after the hordes raid it the first three days! That is why I believe the $20 bill will go up, temporarily, and then plunge down to obscurity quickly! There is nothing to back it! And if you can’t get any more…it will be like the Confederate bills following the War between the States (1860s American Civil War). WORTHLESS to buy and sell with because the game changed. Well, when the SHTF, the game will Change forever, my friends…so we must be prepared to “Deal with it.”

A simple formula I have come up with explains it as follows: where n is the day before the power goes out and x is our beginning value of a silver ounce round at $25.

Here is another rub. Those billion ounces of physical silver (read: tons and tons) that JP Morgan and the banks of New York, Fort Know and London have stored in their vaults (supposedly) will never again see the light of day…because the electronic locks won’t open, the armored trucks won’t roll and the banksters will not be able to access or transfer them no way, no how. So, that supply just disappeared, literally. Therefore, no cavalry in “silver shining armor“ is coming to save the day with bail-outs from their stashes. As an old adage goes, “Water which is distant is no help for a fire which is near.” Meaning, you are on your own in your little neck of the woods (town or city) to determine bartering values of your own. Localities and proximities will vary tremendously, as they have through the centuries. That precious monetary metal that was a primo strategic asset just one day ago…is now locked away deep beyond the reach of mere mortals (who don’t know about its whereabouts, nor care because they are fighting for their lives and trying to feed their kids about now…).

While researching for this article, I came across one written by Bix Weir for Roadtoroota.com talking about $7,000 /oz silver if they just “remove one or two banks from the supply side of the paper silver equation” and watch “it skyrocket overnight.” He also said, “The silver markets are rigged. Every day. Every trade. Every option. Every derivative.

The silver markets have been rigged since the early 1970s when Alan Greenspan introduced computer market trading systems to the world beginning the long-term commodity market rigging operations.” Now I don’t know much about that because I was only seven at the time…but I do believe that the Banking Cabal controls it so that nobody really knows the “Fair Market Value” of silver anymore. JP Morgan Chase bank and Goldman-Sachs are members of the London Bullion Market Association and, therefore, are wholesales for the industry (read: Banksters, IMHO). Another great resource was the watershed book The Death of Money by Jim Rickards. He foresaw much of what is going on now before “The Great Reset” (but that’s another discussion completely)… He said, “Confidence in the dollar is lost slowly at first, then quickly.” And on page 219 he writes, “If gold is the numeraire (the monetary standard), then it is more accurate to think of dollars and other currencies as the fluctuating assets, not gold.”

In the Holy Bible it speaks of silver as the money of redemption. See Numbers 3: 46-51 for the explanation God gave Moses about redeeming the first-born males for pieces of silver; moreover, read the accounts of Judas Iscariot in the Gospels attempting to redeem the life of Jesus for 30 pieces of silver. There are several other accounts also where silver, specifically, is the “Redeeming metal.”
In Leviticus, males and females were worth different amounts of silver, depending on their age and health…Value determination “charts”. And even Joseph was sold as a slave for silver shekels…only later to have redemption because it was God’s plan. So, will you “redeem” your fiat FRN’s soon for real money…?

This search began for me in 2014 when a SurvivalBlog article talked about being the local bank in a post-collapse scenario. They discussed having a variety of “junk silver coins” and 1 oz “rounds” on hand to act as the exchange “bank” in your local area.
Hey, somebody’s gotta do it, right?!

Then it talked about the security force manpower, guns, and vaults that would be necessary to guard and protect it…and my interest in taking on that project waned. Also, the author suggested 30 oz of gold, 3,000 oz of silver and $2,500 in junk coins which equals about $100,000 today…gulp! “Loans, collateral and acting as a conduit” was outta my wheel-house…

However, the concept has not left me…therefore, I will bring this up…do you have, in your possession, a silver/ gold/ platinum Test Kit?

If not, how will you be able to determine the “real” from the “fake” precious metals. “Where the rubber meets the road” basics need to be procured NOW, ahead of time and while you still can. They are cheap online. And a non-digital, non-electronic postal scale for weighing out the coins, rounds and bars. Go order one right now! It’s better to have it and not need it than to need it and not have it! Same with the guns, friends, colleagues, plans, ammo, and food-stores…but you guys already know this…

Pure gold weighs 19.3 gram/ cc and pure silver weighs 10.5 gram per cubic centimeter…did you know that? Do you know how to test and confirm it? Can you spot counterfeits? FYI- Tungsten can be covered with a thin layer of gold and weight about the same. Molybdenum can be coated with silver and resemble a silver ingot. Beware…desperate people do desperate things.

Will you be the banker or the crook? Today, they may be the same thing…but when the SHTF, someone in your area has to be educated and motivated to work it through and head it up…if you have read this far, it could be, and should be YOU. Be able to “prove the legitimacy” of the goods brought in for trade and barter (either on a small scale or a huge scale).