Archbishop Georg Gänswein also said that ‘the Catholic Church herself is in a deep crisis — with a serious internal dissent within the Church as not seen for centuries.’

(LifeSiteNews) — Pope Emeritus Benedict XVI’s private secretary Archbishop Georg Gänswein referred to numerous consequences of coronavirus-related lockdowns, including “enormous collateral damage and alarming suicide number that are strictly taboo.” He also talked about the “deep crisis” in the Church, as well as the resilience of Catholics amid crises.

Gänswein explained in his speech Saturday that he has been living in a quasi-lockdown with the former Pope ever since the latter resigned from the papacy, before pointing to the adverse effects of lockdowns in response to COVID-19:

“I have read of a huge run to psychotherapists, heard of enormous collateral damage and alarming suicide numbers that are strictly taboo, and recognize from the ongoing debates in the media that there is no satisfactory answer in sight as to how to respond politically and socially to this distress in an appropriate manner.”

He compared the current situation to the Spanish flu pandemic, which led to tens of millions of lives lost worldwide.

“When the ‘Spanish Flu’ took over 50 million people in just two years from 1918 to 1920, it didn’t scare people half as much as the COVID-19 pandemic does today, as far as I can see — without all the lockdowns and masks and vaccination debates.”

While admitting that he might not have “studied it enough,” Gänswein speculated that people at the time — just after World War I — were far less afraid of death than people today.

“Was it perhaps because the peoples at that time were grosso modo still more at home in religion, and its consolations and resilience? I don’t know. From my family history, I only know that in the generation of my grandparents, death was still perceived and accepted, in a certain way, simply as a ‘part of life.’”

“Frankly speaking, I am not afraid of death, but I am a bit afraid of dying,” he admitted. “Here we see that a certain doubt accompanies faith at every turn as a faithful twin.

“It is, to say it clearly, the temptation to fall away from this demanding faith, for the sake of the temptations of a cheap nihilism, which I understand as the great and widespread contrast to the Catholic faith — as a black hole, as it were, which swallows up every truth and every sense of existence with the erroneous conviction that not God but nothingness surrounds us.” 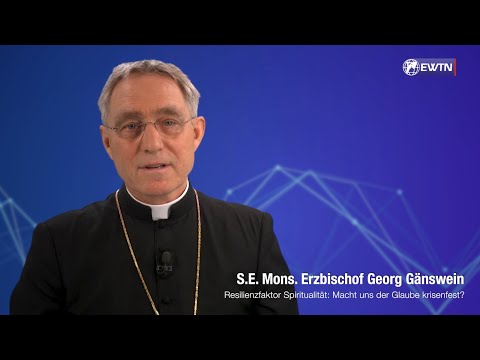 Speaking at an event on “Crisis and Opportunity” organized by RPP-Institut, which focuses on psychiatry and psychotherapy, Gänswein said that “the Catholic Church herself is in a deep crisis — with a serious internal dissent within the Church as not seen for centuries.”

The theme of crisis, however, is not new in the Church, Gänswein emphasized. Since the very beginning, “the Church has always been aware that it is made up of sinful and weak people.”

Christ made Simon “the ‘foundation’ of his Church,” but “the evangelist Matthew writes that this apostle, after the arrest of his Lord, cried and raved that he did not know ‘this man.’”

“Thus, Jesus Christ founded the Church as a community of fragile people and not of angels, or fairies and mythical creatures,” Benedict’s private secretary said.

“This is not to gloss over anything or even to give the victims among us any less respect that they so deserve. Sin and crime have nevertheless always existed in the Church! Of great artists, for example, who have decisively worked on St. Peter’s Basilica, it was never a secret that they were also great sinners.”

“In all times there have always been saints in the Church, and always at the same time as the criminals, as in our time: the time of Mother Teresa of Calcutta and the time of Cardinal McCarrick of Washington.”

Referring to Pope St. John Paul II, who worked, often closely, with the disgraced and abusive founder of the Legionaries of Christ, Marcial Maciel Degollado, Gänswein cautioned, “Saints are not psychics or magicians.”