I can prove anything with statistics, except the truth

Does Canning’s aphorism still hold true, given that data collection and statistical analysis have progressed beyond all recognition in the last two hundred years? This article tests that proposition.

It is still true, because of the interests for which statistics are deployed. We know, or should know, that CPI indexation of prices fails to reflect the true rate of decline in the purchasing power of fiat currencies. That is at least a simple case of governments saving money on indexation. But being economical with the statistical truth is a far wider practice encompassing input suppression, misleading deployment, and their use to support beliefs and preferred outcomes instead of backing up properly reasoned economic and monetary a priori theory.

This article finds that the application of all these methods corrupt monetary statistics, including the three principal components of the equation of exchange. This analysis is sparked by recent changes to the definition of M1 money supply in the US.

Monetarists have long held that there is a relationship between changes in the quantity of circulating currency and the general level of prices. It is not the only factor governing the relation, but it has been generally established to be true. So persuasive is the theoretical case, that no one — not even modern monetary theorists — deny it. We generally assume that the monetary statistics, the sheet anchor to the equation of exchange that emerged over a century ago, are reliable. But even monetary statistics whose components drop out of accounting identities end up being sliced and diced at the behest of the authorities, raising the question as to what we should regard as money at a time of unprecedented peacetime global monetary expansion. And the monetary policy planners moving the goal posts question by their actions the macroeconomic habit of relying solely on statistical evidence for predicting outcomes.

In February, the Fed changed the definition of M1 to include “Savings deposits” and “Other checkable deposits”. They are now combined and reported as “Other liquid deposits”. The effect is to increase M1 but to leave M2 unchanged, as illustrated in Figure 1. 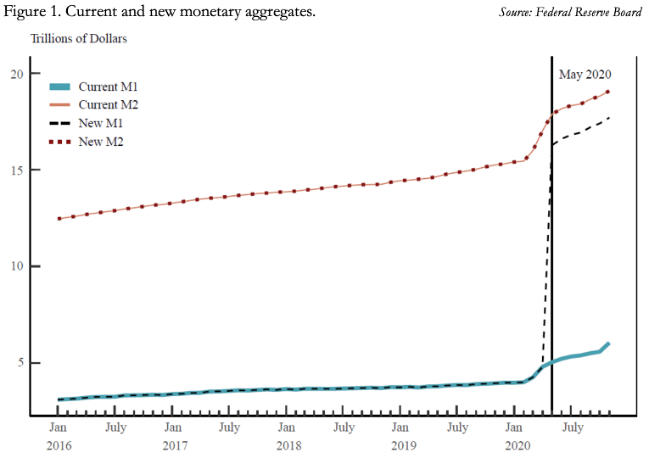 The change accepts the reality, long recognised in the Austrian school’s definition of money supply (AMS), that depositors and banks assume savings accounts are just another form of money available for spending on day-to-day transactions. Monetary policy planners generally circumvent such considerations, looking at monetary definitions from their policy viewpoint instead of the perspective of money’s users.

For statistics junkies, there is a disadvantage in that the new M1 is only readily available as a retrospective monthly average instead of a more current weekly average. This has the effect of under recording the increase of M1 in this statistic at times of rapidly rising monetary inflation. And importantly, M1 is so much modified by these changes as to be rendered useless as a statistical record of monetary inflation.

This raises other questions, such as should we regard broad money or narrow money as the primary indicator of changes in the money supply? And, more deeply, should we ignore the statistical detail and try to understand money from an a priori analysis of the theory of exchange? This is the key difference in the approach of establishment monetarists compared with the Austrian school. Monetarists today, in common with other macroeconomic schools, test propositions by statistical correlation, thereby avoiding the necessity of sound theoretical analysis. Consequently, the definition of money rarely progresses beyond simplistic propositions. And its true use value, which is defined by less predictable human action, is ignored.

The Austrian school generally disregarded the statistical approach to money, until Murray Rothbard attempted to define circulating currency solely in the context of US monetary statistics, work that was consolidated by Joseph Salerno.[i] But slotting different monetary statistics into any combination has never been standardised, so what applies in America, which cannot be precisely defined anyway, doesn’t apply elsewhere. Nor does it when the makeup of a monetary component is altered, excluded or included, such as the current modifications to M1.

Therefore, whatever statistical evidence there is can only be used to corroborate a theoretical analysis, and not be accepted as prima facie evidence. As Lord Canning put it two centuries ago, you can prove anything with statistics but the truth.

A theoretical approach to understanding money must start by defining it. This definition is taken from the glossary to von Mises’s Human Action:“The most commonly used medium of exchange in society. A community’s most marketable economic good, which people seek primarily for the purpose of later exchanging units of it for the goods or services they prefer. The circulating media most readily accepted for the payment for goods, services and outstanding debts. Money is an indispensable factor in the development of the division of labour and the resulting indirect exchanges upon which modern civilisation is based.”In other words, money is the medium that links production with consumption through the division of labour. It must be immediately available for that purpose. That certainly includes cash in circulation and money in the bank. Correctly, it is now argued by the Fed that because in practice savings are instantly available to bank depositors, that they are cash equivalents. But there are other important aspects of money, such as unspent government balances. Because that can be drawn down at any time, it is money as well, just as if it were money due to an ordinary depositor. But that is not included in the Fed’s definition of M1 (renamed M1 SL), which is an important omission given recent balances on the government’s general account of as much as $1.7 trillion. If, as well as savings deposits, unspent government balances had been included, M1 SL money supply would have looked more like Rothbard’s Austrian money supply (AMS) in Figure 2.[ii] 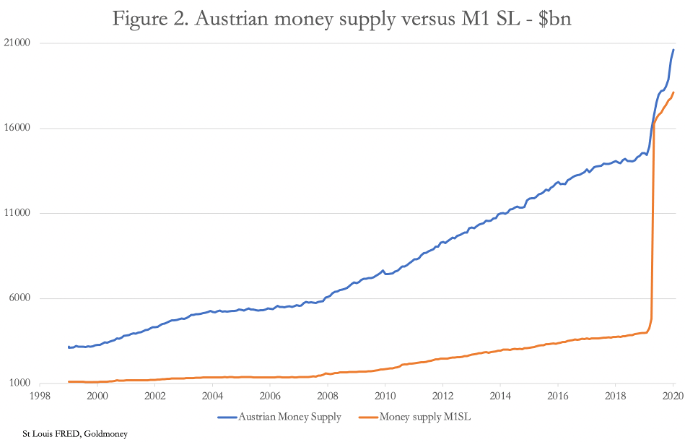 There are good theoretical grounds behind the Austrian money supply calculation, but the absence of the government’s general account in the official M1 calculation disqualifies it from being a true reflection of cash and cash alternatives available for spending. Consequently, official M1 has not yet caught up with AMS, having risen from $3,977bn in January 2020 to $18,105 exactly a year later, an increase of 355%. Over the same timescale AMS rose from $14,082 to $20,614, an increase of 46% — less dramatic perhaps, but genuine.

When it comes to managing expectations, a genuine increase in narrow money of 46% is of greater concern than a far larger increase due to changes in the statistic. This appears to be the reason for the Fed’s part-conversion to Austrian money supply. But they chose a halfway house, which signals perhaps less of a comprehension about what money represents to the wider public and more of a desire to conceal the true state of monetary affairs. And by suppressing interest rates, monetary policy attempts to increase the circulation of money which, the planners appear to believe, would otherwise sit in bank deposits unutilised. The fact that bank deposits are the backing for bank credit whose expansion is also desired escapes this line of reasoning, but that does not stop planners trying to increase the circulation of money.

Even with M1 money supply at a lower figure that AMS, velocity of circulation is close to unity. Velocity is a widely accepted concept, used as a statistic to promote macroeconomic discourse. The St Louis Fed defines it as follows:

The velocity of money is the frequency at which one unit of currency is used to purchase domestically produced goods and services within a given time period. In other words, it is the number of times one dollar is spent to buy goods and services per unit of time. If the velocity of money is increasing, then more transactions are occurring between individuals in an economy.

This is patently untrue. For it to be correct there would be no relation between production and consumption, and consumers would somehow end up with money to spend without earning it. Money-printing might appear to satisfy this condition, because some money is produced out of thin air instead of being genuinely earned by economic actors. It does not excuse this calumny. What makes this statistical approach acceptable to neo-Keynesians is the denial of Say’s law, which describes the rationale behind the division of labour and points out that money is the most marketable intermediate good whose primary function permits production to be turned into consumption.