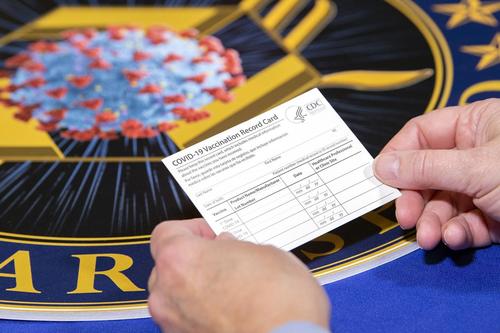 “I work at a pharmacy and grabbed blank ones for me and my hubby,” said one TikTok user, who was identified by other users as a pharmacy tech in Illinois – and promptly reported to state healthcare authorities, according to the Daily Beast.

“Can I pay you to ship a couple to me,” another TikTok user identified as a Texas nurse wrote under the original video bragging about the theft – and was also promptly reported to Texas healthcare authorities.

“I got a template if u want it,” posted one TikTok user under a viral video about faking vaccination cards.

“Stop hating on me! I don’t care what any of you think. I did what is best for my husband and I,” posted the Illinois pharmacy tech right before she wiped her TikTok account history – only to try and cover her tracks by posting a fake TikTok claiming to be a 16-year-old British girl doing a social media experiment for her filmmaker father.

Walker, along with user Savannah Sparks, have since posted several more TikTok videos calling out healthcare workers for allegedly forging or attempting to forge vaccine cards. They claim dozens of tips have been sent to them by other users on the platform, but which they haven’t been able to verify.

If it seems surprising that vaccine resistance would exist among medical professionals, even those with a strong background in science, Schaffer said it simply highlights how many Americans are still resistant to vaccination, more than three months after the first jabs went into the arms of frontline health-care workers. In February, a survey conducted by experts from Northwestern, Northeastern, Rutgers and Harvard universities found that 21 percent of health-care workers surveyed did not want to be vaccinated. Hesitancy, which indicates skepticism towards the vaccine but not an outright unwillingness to be vaccinated, was 37 percent. –Daily Beast

Meanwhile, fake “vaccine passports” are already being sold on the street. Via Summit News:

Fake ‘vaccine passports’ are already being sold by criminals on the streets, according to TV personality Andrew Gruel, who said he saw it happen.

Earlier this week it was revealed that the Biden administration has been working with tech companies and non-profits to create a vaccine passport that “will play a role in multiple aspects of life.”

According to a CNN report, the vaccine passports, which could be ready in weeks, will be a condition of the United States returning to “normalcy” before the end of the year.

However, it appears as though street scammers have already beaten the government to the chase.