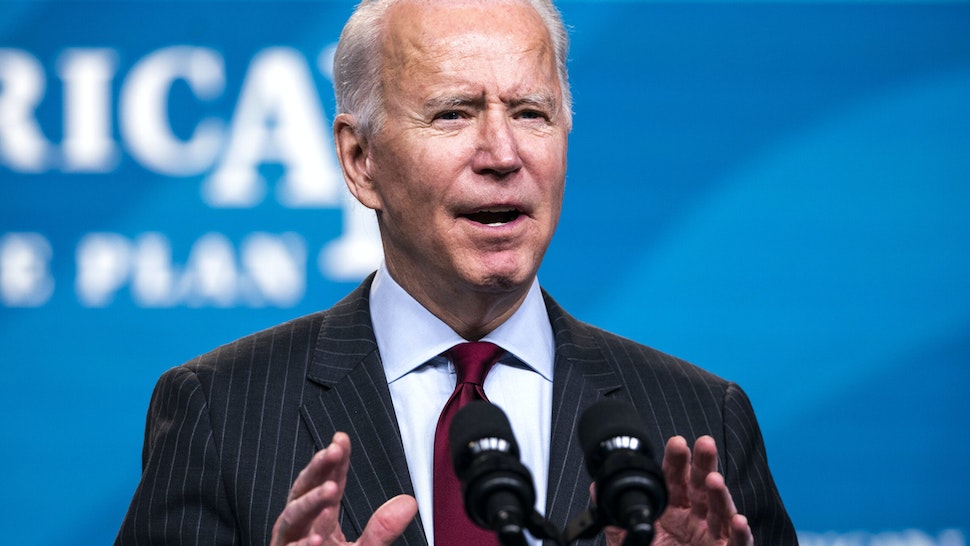 The Biden administration is reportedly considering scheduling a “controversial” vote on a gun control bill in the next couple of weeks, news which comes as Biden demanded last month that Congress take action on cracking down on American’s Second Amendment rights.

A report by Punchbowl News, which was founded by former Politico reporters, said that House Speaker Nancy Pelosi and other House Democrats were focused on turning their attention to other issues that the Biden administration has on its agenda, including gun control, after they passed Biden’s “American Rescue Plan” last week.

The report said that Democrats plan to “push through as much legislation as they can” over the next two weeks.

“And Democrats may schedule another controversial vote that [time period] as well — legislation requiring universal background checks on gun sales (H.R. 8),” Punchbowl News reported. “Another bill would close the so-called ‘Charleston Loophole,’ which allows gun purchases to proceed if the background check isn’t completed in three business days. Both bills passed the House during the 116th Congress only to be blocked by Senate Republicans.”

The National Rifle Association tweeted out a warning that Biden’s “extreme gun control” agenda would be brought to Congress sometime in the next couple of weeks.

“Sources in DC report that Congress will be voting on Biden’s extreme gun control legislation as early as next week,” the NRA tweeted. “Possible that they will bypass committee process. Stay tuned, NRA members.”

🚨BREAKING: Sources in DC report that Congress will be voting on Biden’s extreme gun control legislation as early as next week.

Possible that they will bypass committee process.

Last month, Biden wrote to Congress, “I am calling on Congress to enact commonsense gun law reforms, including requiring background checks on all gun sales, banning assault weapons and high-capacity magazines, and eliminating immunity for gun manufacturers who knowingly put weapons of war on our streets.”

In the statement, Biden’s call for ‘banning assault weapons’ likely amounts to calling for a ban on semi-automatic firearms, and there was no language included in the statement about allowing gun owners who currently own those weapons to be able to keep those weapons. If gun owners are not allowed to keep those specific semi-automatic firearms under a Biden ban, that would effectively amount to a mandatory gun confiscation-type program. …

Biden’s call on Congress to enact legislation that would strip gun manufacturers of immunity from lawsuits who ‘knowingly put weapons of war on our streets’ is essentially a backdoor way of trying to bankrupt the gun industry or force them to drastically change the types of weapons they are willing to sell.

When gun control activists use the term ‘weapons of war,’ they are generally using it in such a way as to portray the weapons that they want to ban as ‘weapons’ that are used in ‘war,’ as in used by militaries. However, this is inaccurate because the types of weapons that gun control activists are referring to, usually AR-15-style rifles, are not used in war. The variants of those rifles that are currently sold by gun manufacturers in the U.S. are semi-automatic firearms, not the fully automatic versions that are used by military.

“There is seemingly little limit to what Biden wants to target when it comes to the Second Amendment, ranging from taxing gun owners, banning magazines ‘that can hold multiple bullets in them,’ offering ‘no compromise‘ on the issue, and making other incoherent remarks like claiming that a ‘rational policy‘ on guns is making sure ‘you cannot have 20, 30, 40, 50 clips in a weapon,’” The Daily Wire reported. “While on the campaign trail, Biden said that far-left gun control activist Beto O’Rourke was ‘going to be the one who leads this effort’ for the Biden administration. O’Rourke has called for confiscating firearms from Americans.”

A couple of days after Biden made the demand of Congress, White House Press Secretary Jen Psaki signaled that Biden was open to using executive orders to implement his gun control agenda.

Alan Gottlieb, the founder of the Second Amendment Foundation, said in a recent interview that Biden had launched a “four-prong attack against firearms ownership in the country,” which did not even include what Biden may be considering achieving through executive orders.