For the sake of this article Tech Oppressors are:

• Media that blatantly lies about recent history and thinks their readers are too stupid to remember the last four years. (Note– The argument could be made that by still trusting those liberal media outlets, those people are displaying stupidity, so maybe the media is right about that one)

• Financial institutions refusing service because the customer had the wrong ideology.

Usually when talking about tech oppression we would be talking about censorship, but what we are seeing now, goes far beyond simple censorship and right into tech tyranny against Americans.

TECH OPPRESSION/TYRANNY
That statement in the headline, among others, can get you banned from social media such as FaceBook and Twitter, blacklisted from search results by big tech, demonetized by Adsense and Youtube (owned by the same group), and demonized by the liberal establishment media.

If you are anti-vaccine, or believe the evidence that has been documented of election fraud, you either censor yourself beforehand, or risk losing the platform and any revenue generation associated with your “opinion” on that platform.

Let me just show you an example from our own Adsense, a notification we get almost every day where any opinion that doesn’t toe the official narrative set by Democrats and their Media puppets, is considered “Dangerous or derogatory content.”

Yesterday’s notification showed 7 pages, one of which from just the last week alone, while the day before that it was 5… the point is, every day, or every other day, the email notification comes in to let us know that they do not approve of the content, so they label it dangerous and/or derogatory, then disable ads on those pages.

The bottom one, is our Alternative News, which simply lists the headlines of our articles.

I guess our headlines are dangerous… who knew? I guess I can picture our readers arming up and marching to the nearest……food joint. You dangerous people, you!

Seriously though, our choice is self-censor or be punished for having the “wrong” opinion.

Looking at the headline of this piece, I guess readers can tell that we are refusing to self-censor because we will be damned if Democrats can spend four freaking years calling Trump an “illegitimate” president, while the media and Democrats pushed the now debunked Russian collusion hoax, and we cannot do the same.

It may not look like it anymore, it may not feel like it anymore, but this is America and until they manage to prevent me from getting online at all, I will say what I believe and want, and they can……well, you know.

Let me be clear… it is my opinion, after seeing evidence of voter fraud, on video (which YouTube has been deleting regularly), along with arbitrary rules changes in the midst of election season, some of which directly violate their own states constitutions…. that Joe Biden is an illegitimate president.

This is why in my articles, I say he is occupying the White House, and I refuse to refer to him as the president.

In fact, in the words of Hillary voters: ‘NOT MY PRESIDENT.”

Anyone that denies that Clinton supporters made those claims has been hiding under a rock, but the image below, one of hundreds upon hundreds, maybe even thousands, shows the truth. 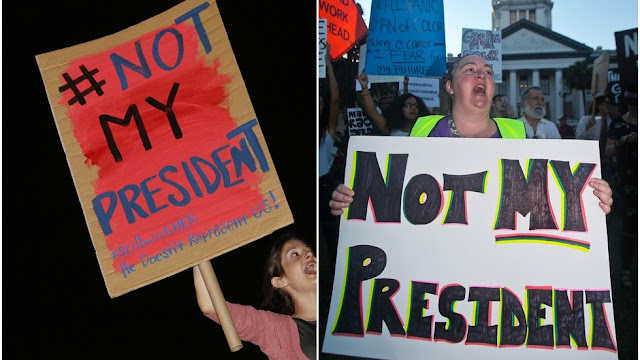 Notice the #stillwithHER towards the bottom of the first image.

With examples like that above, and public statements from liberals across the nation it is astounding to see the mass amnesia that we are noting from the media.

New York Times Paul Krugman put out an article on November 30, 2020, after the election, but before Biden started occupying the White House, a portion of which is shown and highlighted in the image below: 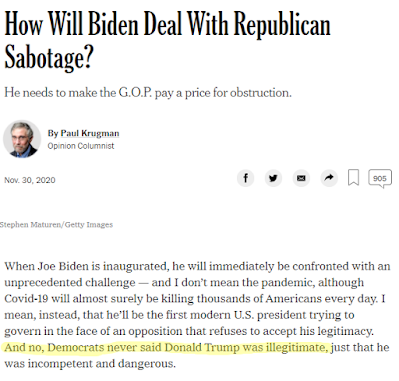 He claimed that Democrats never said Trump was illegitimate? As was pointed out at the time, evidently Krugman forgets that his own online statements are still online!!!!!

So this was a tainted election. It was not, as far as we can tell, stolen in the sense that votes were counted wrong, and the result won’t be overturned. But the result was nonetheless illegitimate in important ways; the victor was rejected by the public, and won the Electoral College only thanks to foreign intervention and grotesquely inappropriate, partisan behavior on the part of domestic law enforcement… nothing that happened on Election Day or is happening now is normal. Democratic norms have been and continue to be violated, and anyone who refuses to acknowledge this reality is, in effect, complicit in the degradation of our republic. This president will have a lot of legal authority, which must be respected. But beyond that, nothing: he doesn’t deserve deference, he doesn’t deserve the benefit of the doubt.’ 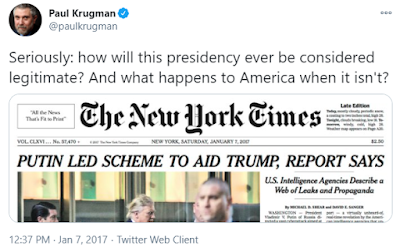 • Before the inauguration, Rep. John Lewis told NBC ‘I don’t see this president-elect as a legitimate president’

• In 2018, Salon ran the blunt headline ‘Trump’s presidency is illegitimate’

• A month later, war hawk and original thought non-haver Max Boot wrote in the Washington Post that ‘Trump is an illegitimate president whose election is tainted by fraud’ (Archive.is link here)

• In 2019, Hillary Clinton told CBS News that Donald Trump was an ‘illegitimate president’ who ‘knows’ he stole the 2016 election