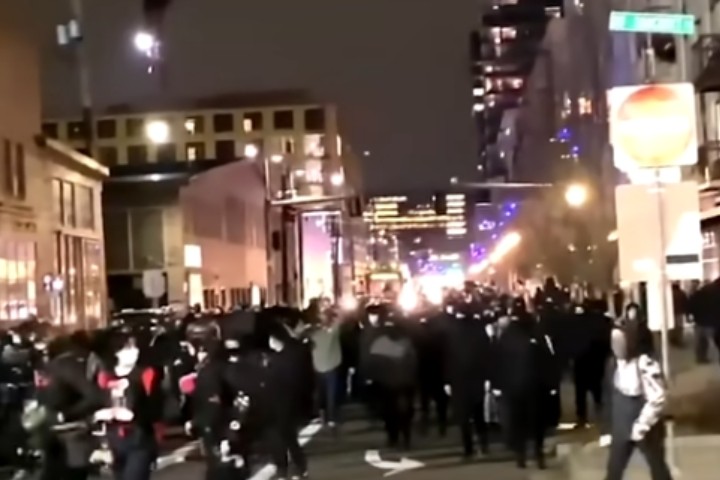 It’s what has been called the Third Worlding of America: a double standard where instead of equal protection under the law, political opponents are punished via the courts while rioting allies are tacitly told by the powers-that-be, “Good job, son — and we may need you again soon.”

This is no exaggeration. “Remember when they called the last president a ‘fascist’? His critics walked the streets unimpeded,” noted Fox News commentator Tucker Carlson on Thursday. “That’s not true anymore. Joe Biden’s DOJ is cracking down on the January 6 insurrectionists.”

“They even made sure Chewbacca guy didn’t get out of jail; he’s still there tonight,” the host continued. “But it turns out that not all insurrectionists are treated equally. We’re now learning that many of the last year’s rioters, actual rioters, the people who attacked the federal courthouse and ruined small businesses, are not even facing prosecution anymore.”

After citing some relevant statistics, Carlson then welcomed New York Post columnist Miranda Devine on the show. Elaborating on his points, she stated:

Well, I mean, it’s there in the numbers, Tucker. You see that almost every BLM, Antifa, anti-cop rioter from last summer was released from jail without bail and had charges dropped. You saw it in New York where 400 rioters arrested in June were just released and no charges. In Washington, D.C. it was the same thing: Everyone arrested and charged with felony rioting; released — no charges. And in Portland … where police were attacked with Molotov cocktails and bricks and a federal courthouse was under assault for months; rioters there, 90 percent of them had their charges dropped. And by contrast, you have the people arrested over the capital riot. Most of them are still in jail two months later. They have been transported to a jail in Washington, D.C. from all around the country, far from friends and family; they’re not allowed … they’ve been refused bail or bond. They are languishing there under very extreme circumstances. And even people who just turned up at the Trump rally, never went near the Capitol, are being raided by federal agents at the moment, and that puts the fear of God into them and makes their neighbors suspect them. So what we’re seeing is, really, a two-tiered justice system is being created by the Democrats to punish their political enemies .

After mentioning that all this was happening “with the complicity of Republicans in Congress,” Carlson then asked Devine why no one was sounding the alarm. “Well, because they’re frightened,” she replied.

She pointed out that House Speaker Nancy Pelosi and other leftists have used a very “clever tactic” in branding the January 6 Capitol trespassers “white supremacists.” It’s a brazen tactic, too.

While I wrote in January that the Capitol event was Democrats’ “‘Reichstag Fire’ Moment,” it was actually bolder still. Whether or not the 1933 burning of the German parliament building was effected by communists, the reality is that such ideologues were ascendant in Weimar Republic Germany.

Yet white supremacists in America today are vanishingly rare and, unlike the communists in 1933 Germany, haven’t won 17 percent of their national legislature’s seats; in fact, shunned and ostracized, white supremacists have no institutional power whatsoever.

Of course, this is why the leftist establishment now brands anyone and anything reflecting tradition and order — even the grading of school papers on quality — as “white supremacist.”

But this all just accords with infamous socialist Saul Alinsky’s book Rules for Radicals’ prescriptions. “Pick the target, freeze it, personalize it, and polarize it,” rule 13 states. “Cut off the support network and isolate the target from sympathy. Go after people and not institutions; people hurt faster than institutions.”

Then there’s Alinsky’s rule 3 of the 11 Rules on the Ethics of Means and Ends: “In war the ends justify almost any means.”

Thus is the white supremacist narrative spread by the deceitful — and repeated by the dull. As to this, Joe Biden’s attorney general nominee, Merrick Garland, either fatally ignorant or fatally malevolent, vowed in his opening statement to the Senate Judiciary Committee February 22 to hunt down the “white supremacists” who stormed the Capitol.

Yet the Capitol protest was not motivated by white supremacism. The contrary notion is “Nancy Pelosi’s narrative, which she has driven with escalating hyperbole until it no longer resembles anything that happened on January 6,” as Devine put it in a recent article.

Ergo, the intensifying of disgusting double standards. Here’s another: When President Trump proposed using troops to quell leftist riots that caused thousands of businesses’ destruction and led to murder and the ravaging of lower- and middle-class neighborhoods, it was labeled a fascist proposal; it was even stated that top military brass might disobey his orders to thus deploy.