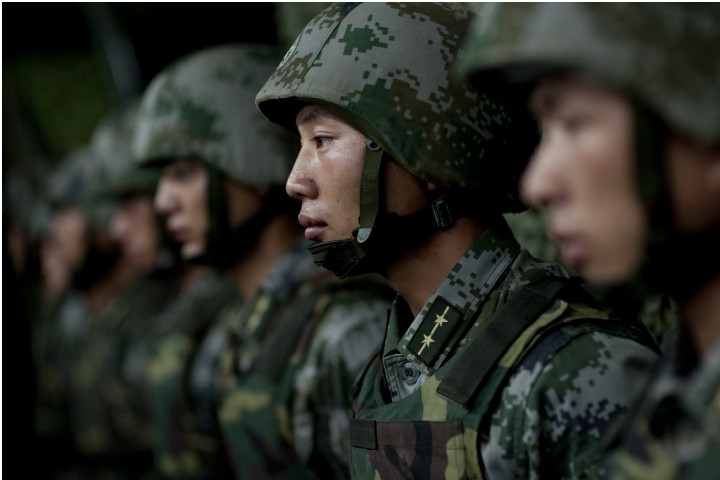 Will waxing Yin and waning Yang end America with a bang? It’s a fitting question as the feminization of the American armed forces continues apace, with Joe Biden talking about “maternity flight suits” and changing “the culture and habits that cause women to leave the military.” Meanwhile, our chief geopolitical adversary, China, is choosing a very different route:

It’s embracing a program designed to enhance the masculinity of its adolescent boys.

This story became an issue after Fox News host Tucker Carlson highlighted feminism-driven armed-services changes being advocated by Joe Biden and accused the Bidenites of making “a mockery of the US military.”

“While China’s military becomes more masculine as it has assembled the world’s largest navy, our military, as Joe Biden says, needs to become more feminine,” Carlson stated on his show’s Tuesday edition.

At issue are comments Biden made on International Women’s Day emphasizing the goal of making the military more accommodating for females. “We’re making good progress designing body armor that fits women properly, tailoring combat uniforms for women, creating maternity flight suits, updating requirements for their hairstyles,” said a seemingly semi-catatonic Biden. “And some of it’s going to take an intensity of purpose and mission to really change the culture and habits that cause women to leave the military” (video below).

Unsaid: One of those “habits” causing women’s departure is called hanky-panky, with thousands of female sailors on navy vessels becoming pregnant every year. In fact, women are up to 50 percent more likely than men to leave their positions aboard ships and return to land duty — at great expense to the military. There are even stories of women purposely getting pregnant to avoid deployment.

Carlson’s statements on the matter — such as sarcastically saying “Pregnant women are going to fight our wars” — evoked criticism from military brass. “Several Army generals, as well as the Sergeant Major of the Army, the service’s top enlisted member, have called out Carlson, arguing that he ‘couldn’t be more wrong’ about women in the military,” reports Business Insider.

But methinks they doth protest too much. I get the feeling here that Carlson struck a nerve, that he’s the guy who said the emperor has no clothes and that the empire is striking back.

Speaking of which, since when do military brass enter the political fray and attack a civilian TV commentator? Some have labeled this a violation of military code, and, for sure, it’s troubling when the armed services pick sides in partisan battles.

Also telling is that while a Pentagon spokesman said that they won’t “take personnel advice from a talk-show host,” they do take advice from bigotry-stoking, diversity-dealing social-engineers. In fact, this is a longstanding problem.

As the Washington Times reported in 2015, “Two years ago, Army Gen. Martin E. Dempsey, the nation’s top military officer, laid down an edict on the Obama administration’s plan to open direct land combat jobs to women: If women cannot meet a standard, senior commanders better have a good reason why it should not be lowered.” Talk about getting things backward.

In fact, they surely would be lowered, said retired Army officer and author Robert Maginnis. Politically correct Pentagon appointees would “force the services to accept degraded standards” like it or not, the Times also informed.

Then, Tucker Carlson reported on December 21:

Last week, Acting Secretary of Defense Chris Miller, announced that the U.S. military will be changing its standards from top to bottom. This is not to create a more effective fighting force to save your children from China or other foreign domination. No, it’s in order to conform to policies formulated by the Pentagon’s so-called Diversity and Inclusion Board. You can imagine what those policies are. Strict affirmative action, hiring and promoting by appearance, the elimination of objective standards. According to Miller, who should be ashamed of himself, these extremist left-wing social engineering projects are “moral imperatives” in the armed forces, though he did not explain why.

As late radio giant Rush Limbaugh would famously say, “The military’s job is to kill people and break things.” Its purpose is not to create employment or “opportunities” for women (or any other demographic); it’s not a vocational school, jobs program, social-experimentation laboratory, or a vehicle through which to advance “equity.”

And as soon as the military prioritizes accommodating women or making them feel more comfortable, it has strayed from its purpose. In fact, if the average woman could ever be too comfortable in the military, it’s a red flag.

Meanwhile, China has adopted a policy called “Proposal on Preventing the Feminization of Male Adolescents”; it’s designed to cultivate masculinity in teen boys, who are described by a top Chinese political adviser as now being “delicate, cowardly and effeminate.”