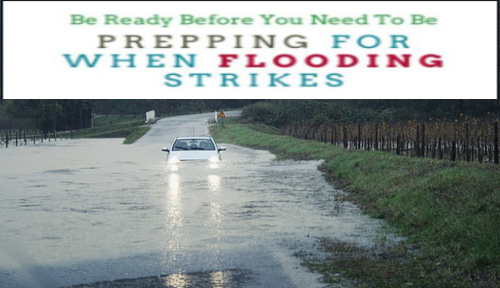 On February 22nd, Susan Duclos reported in this ANP story that both Joe Biden and the ‘green energy industry’ have blood on their hands following the energy debacle in Texas that left many dead, with the exact number of deaths due to the storm not likely known for weeks if not months, and while we’d love to report here that things will be returning to normal as warmer weather moves into much of America, with that warmer weather comes a new threat that could be just as deadly.

As CNN had reported in this recent story (saved at archive), after the snow melts, the flooding begins and while NPR reports in this new story that towns all across America now face the potential of horrific flooding in the days and weeks ahead, their blaming that flooding on ‘climate change’ really dilutes their message.

Yet the message is clear to millions. With springtime flooding set to strike all across the US in regions hit hard by heavy snow this Winter, we’re already starting to see the beginning of the ‘big melt-off’ here, with temperatures reaching a whopping 35 degrees on Monday, the ‘drip drip drip’ of snow melting off the rooftop is deafening while, sitting up here on top of a mountain, we can see the beginnings of a melt off river down below us.

And with temperatures around here climbing up into the 50’s by Wednesday almost guaranteeing that somewhere down below, the floods will begin as they always do this time of year, we have to take a look within this ANP story at preparing to make it through flooding conditions, especially with fire and rescue squads already responding to flooding rescue calls and floods as deadly as nearly any ‘weather event’ that we face. 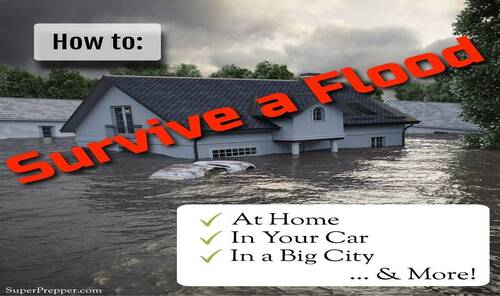 While ABC News had reported in this recent story that the yearly flood damage in America was about $17 billion a year between the years 2010 and 2018, as CNN had also reported in this story (also via archive), while wildfires and hurricane-force winds produce stunning videos and headlines, flooding is the most common and costly natural disaster in the United States.

Reporting within their story that almost no place in the country is immune as 98% of all counties in the US have experienced at least one flooding event, as Happy Preppers reports in this story, flooding can  also be extremely deadly besides being expensive. From that story before we continue.:

Ten things you probably didn’t know about floods in America

#1: Flood usually isn’t covered by insurance. Most homeowners insurance policies and renter’s policies exclude coverage for losses resulting from flood damage. Talk with your insurance agent. As a general rule unless you purchase a flood policy, you do not have coverage for flood losses. That’s why it’s important to get it.

Concerned about snow melt flooding? Midwinter and early spring can produce runoff. Be prepared with snow melt insurance for your home, business and contents, but most of all, make a plan for your survival.

#2: Even in an inch of water, you should be thinking about survival. Waters rise very quickly and can be deceiving.

Two inches of water. Even a few inches of floodwater can bring thousands of dollars in property damage not covered by homeowners insurance.

Six inches of water. Flood water (about ankle height) can knock you off your feet!

Floods normally take about six hours to occur! The cause of the flash flood could be that it was raining upstream of disaster in the previous hours. It might also be a dam or levee failure. Urbanization is partially to blame, too. Urban areas lose the ability to absorb water because cement can’t hold, so the roads can quickly become streams and rivers.

#4: Driving into the water is what kills most people in a flood. If you’re caught in the path of flash flooding do not attempt to cross the flow of water, even if it appears safe in just a foot of water. The road underneath could be eroded with hidden dangers. Debris could slam into your vehicle or your vehicle could float away. If caught in the waters do these two things:

2) roll down the window, so you have room to escape before the electricity stops and traps you inside.

Please read the rest of this Happy Preppers story here. 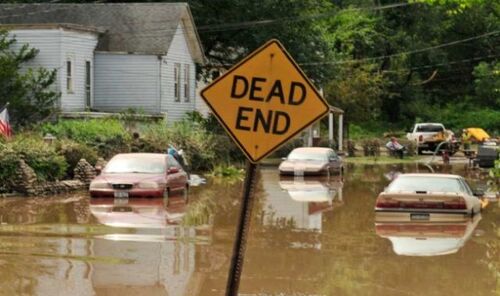 With flooding having caused more than $155 billion worth of damage in the last decade alone in America according to FEMA, traditionally America’s most costly emergency, and now the flood waters getting ready to rise across America with massive snow piles set to melt in the coming days and weeks ahead, we continue to serve our families and loved ones best by preparing for what is to come.

From home flooding barriers to having a pump or two close by when needed, there are plenty of things that we can do should worst case scenarios arise, along with the water, to get prepared well ahead of time.