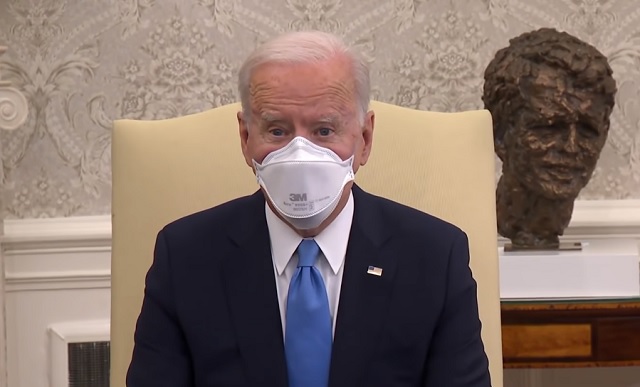 The Biden regime is setting up a new Coalition military base in northeastern Syria at the Iraq-Syria-Turkey triangle, according to reports.

If true, this would explain why Biden sent a large military convoy to northeastern Syria just one day after taking office.

The US-led Coalition plans to establish a new military base at the Iraq-Syria-Turkey triangle in the Ain Dewar area in Hasakah countryside.

According to the Syrian Observatory for Human Rights (SOHR), a military convoy of over 50 vehicles and trucks affiliated to the International Coalition were seen crossing into north-eastern Syria from the Kurdistan Region of Iraq.

“This is the 11th Coalition convoy to enter Syria since the beginning of 2021,” it added.

[…] In the same context, SOHR activists reported seeing on February 6 another convoy entering Syrian territory via Al-Walid border crossing with the Kurdistan Region of Iraq.

It consisted of 50 military vehicles and trucks, including military and logistical equipment. The convoy headed to the bases of the International Coalition in the countryside of Hasakah.

From Middle East Monitor, “US army builds second base in Syria’s Hasakah”:

The US army began building a second base in the Al-Malikiyah region in the Syrian northeastern province of Hasakah, Syria’s SANA news agency reported.

The agency quoted local sources as saying that over the past few days, US forces have deployed military reinforcements including 60 armoured vehicles and army engineering vehicles to carry out excavation, leveling, and construction of barricades in the area, southwest of Ain Dewar in the border triangle between Syria, Iraq, and Turkey.

At the end of last month, American forces began establishing a base near Tal Alu in the Al-Yarubiya area in Hasakah eastern countryside.

SANA news agency quoted the sources as saying that the military base aims to strengthen “the American occupation points and their sites in the vicinity of the oil fields” in order to “ensure the continuation of the robbery and looting of the Syrian wealth, and to secure the roads it uses for theft operations through the illegal crossings it had created for this purpose in Hasakah eastern countryside.”

Last month, SANA reported that the American forces had established a military airport for its base in Al-Omar oil field in Deir Ezzor’s eastern countryside.

In related news, NATO announced on Thursday they’re increasing their troop numbers in Iraq from 500 to around 4,000 — a 700 percent increase.