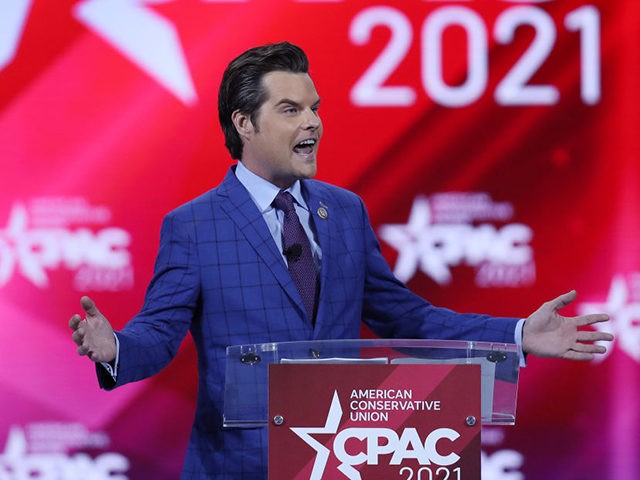 “When Big Tech and Big Government team up, America starts to look more like China,” Gaetz said. “And the Chi-merica dream is shamefully a nightmare for our people.”

Gaetz spoke about the growing threat of de-platforming and censoring prominent voices on the right at a speech at CPAC, held in Orlando, Florida.

“If we win the debate but lose the internet, ours will be the last generation of American greatness,” he warned, noting that the increasingly powerful institutions would “squelch even the faintest whispers of dissent.”

He criticized the left and even some Republicans for their wide support of using American blood and treasure to nurture democracy in the Middle East but failing to protect Constitutional rights in the United States.

“The terms of service on Twitter can never be more important than the values that undergird our Constitution,” he said.

He urged conservatives to help create a “culture of free speech” in America to make it more difficult for the powerful in government to use technology to suppress their views.

China, he said, showed the power of the dangers of a “captive capitalism” linked with business and government to enrich the elite.

“There are no checks and balances when they can ctl-alt-delete anyone for any reason,” he said.

He pointed out President Joe Biden’s administration included a revolving door to some of the biggest technology figures to build a “unified system.”

Gaetz warned that even the apps and social media networks popular with Americans are threatening their freedom.

He said Instagram appealed to everyone’s vanity, Twitter to wrath, Uber Eats to gluttony, and Tinder to lust.

“Are these social networks really making us stronger, safer? Or do they further addict us to our vices?” he asked.