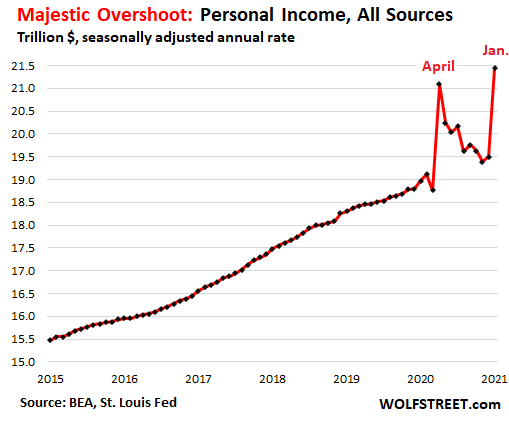 Free money whipped consumers into a rollicking eight-month splurge on goods. There’s nothing “pent up.” And services are not a shoo-in for “pent-up demand.”

And it happened again in January: Free money from the stimulus payments kicked in and consumers further boosted their spending on goods from already high levels.

In January, spending on durable goods spiked by a stunning 18.6% from a year ago, according the Bureau of Economic Analysis today, to a seasonally adjusted annual rate of $1.86 trillion. The spending spree has been going on since June:

And spending on nondurable goods – which includes food and gasoline whose prices have jumped recently – rose by 6.1% from a year ago to a record of $3.21 trillion (annual rate): 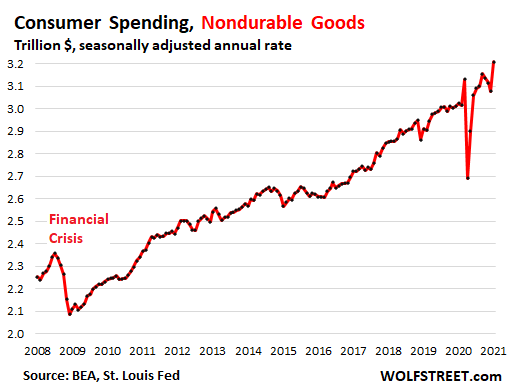 This is an entirely different scenario than what consumers went through in any prior crisis. During the Financial Crisis, consumers suddenly cut their purchases of durable goods and nondurable goods, which you can see in the charts above.

Spending on durable goods plunged by 19% from the peak in October 2007 to the trough in April 2009. This plunge in spending did create some pent-up demand during the recovery.

Nondurable goods during the Financial Crisis dropped by 10% from the peak in July 2008 to the trough in March 2009. Some of this drop in spending had to do with the collapse in the price of gasoline, and also the reduced driving because people were out of work. Prices of food and other items too fell for a few months during this time, which, though welcome by consumers, caused a dip in the dollars spent on these items. This kind of drop in spending on nondurable goods creates only moderate pent-up demand, if any.

But during the Pandemic, the opposite happened.

People got lots of free money from the stimulus and extra unemployment programs. The most recent $600 stimulus payments started showing up in consumers’ bank accounts at the end of December, and massively arrived in January.

Along with income from interest, dividends, rental properties, farm income, income from Social Security and other transfer payments, total income in January, all together, jumped by 13% from a year ago to a record $21.5 trillion (seasonally adjusted annual rate). These stimulus payments made for a majestic free-money-based overshoot:

In addition to the free money…

Millions of homeowners didn’t have to make their mortgage payments because they’d entered their mortgages into forbearance programs. At one point, 4.3 million mortgages were in forbearance, according to the Mortgage Bankers Association. Currently, 2.6 million mortgages are still in forbearance. Federal student loans were automatically entered into forbearance programs, and borrowers didn’t have to make payments. Eviction bans allowed strung-out households to spend some money on things other than rent.

There was a huge boom across the financial markets, and those with assets felt a lot richer and might have spent more; and to top it off, a cash-out refinancing boom, driven by record low mortgage rates and surging home prices, turned homes once again into ATMs.