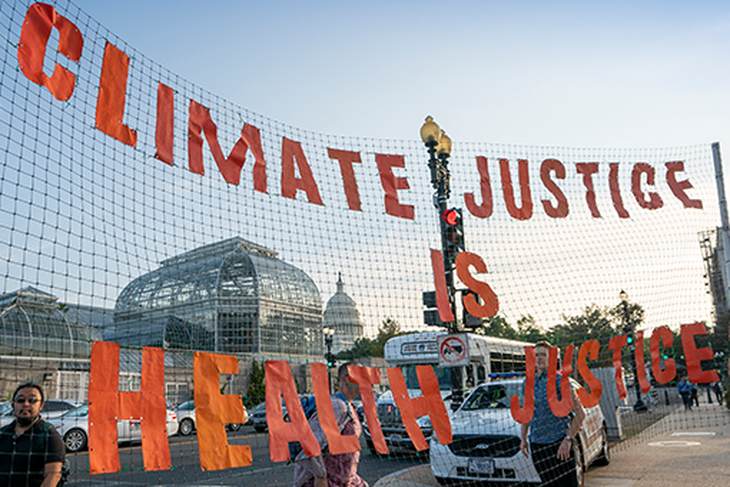 PJM’s Jeff Reynolds reported on the proposed “climate emergency” legislation that would declare climate change a “national emergency.” If passed, it would give Biden sweeping powers and unlock billions in spending.

Since there is no “climate emergency” at the moment, the radical greens have to create one. And the more dire and frightening they can make it, the more powerful they will become. AOC and her cohorts in Congress will do their best but it’s likely that the worst of the “Green New Deal” will never be enacted even with the declaration that climate change is a national emergency.

But suppose President Biden and other western leaders were to declare a “climate lockdown”? In a climate lockdown, “governments would limit private-vehicle use, ban the consumption of red meat, and impose extreme energy-saving measures, while fossil-fuel companies would have to stop drilling.”

As preposterous as that sounds it’s actually being seriously considered in some circles.

Karl Lauterbach, an MP for the German Social Democratic party wrote in Die Welt last December that ‘we need measures to deal with climate change that are similar to the restrictions on personal freedom [imposed] to combat the pandemic.’ How long before this theory makes its way into news outlets and politicians’ speeches here?

Of course this idea will be explained away as simply ‘following the science’. The lockdowns which began in spring 2020 contributed to what scientists are calling the largest drop in CO2 emissions in years. The largest reason for this was a decrease of approximately 40 percent in automobile and airplane transport. The World Economic Forum praised this figure in a blog post titled ‘Emissions fell during lockdown. Let’s keep it that way.’

John Kerry is telling us that the conditions of the Paris agreement are ‘”inadequate.” This begs the question; what would be “adequate”?

As the global climate elite push eating bugs and staying home to save the Earth on the masses, it’s worth posing the question: what will be adequate? With the Global Economic Forum in Davos approaching in April, we’re going to start hearing terms such ‘Climate Equity’ and ‘Climate Reset’ (a play on the WEF’s Great Reset) more frequently. We’ll probably also start to hear calls for climate lockdowns.

In truth, the real agenda of the global elites in Davos and the ivory tower of academia is to destroy capitalism. This would happen not by government takeovers of industry, such as nationalizing rust belt companies like steel, auto, and rubber, but by simply making their products obsolete.

And the best way to do that is by locking down the economy. Presidents have used the national emergency declaration 70 times since the legislation was enacted in 1976 and the lockdowns due to the COVID crisis could very well be used to justify a climate lockdown.

“This was always the risk with the mass implementation of lockdowns. Once your leaders enforce one under the guise of public health, they will not simply set aside their power to do so again,” writes Stephen Miller in The Spectator.