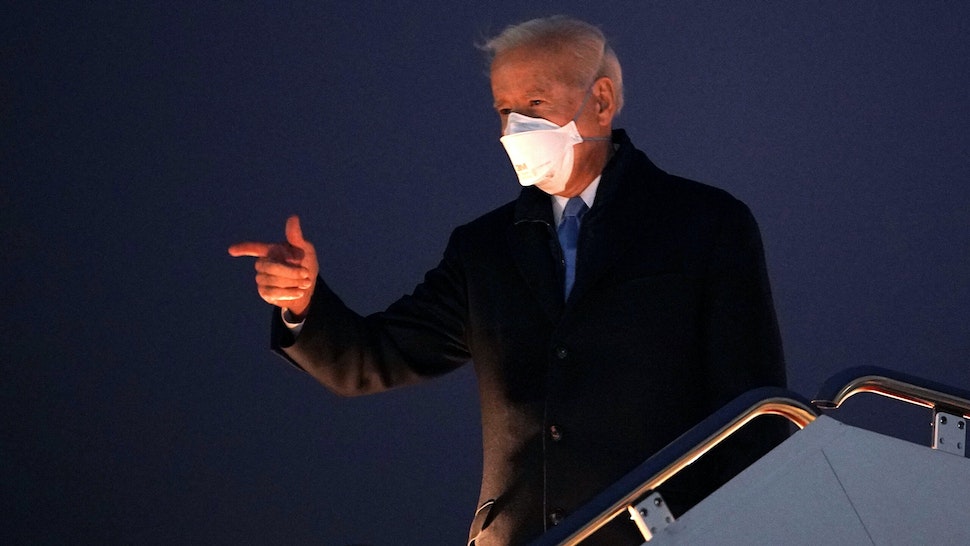 “I am calling on Congress to enact commonsense gun law reforms, including requiring background checks on all gun sales, banning assault weapons and high-capacity magazines, and eliminating immunity for gun manufacturers who knowingly put weapons of war on our streets,” Biden wrote to Congress.

In the statement, Biden’s call for “banning assault weapons” likely amounts to calling for a ban on semi-automatic firearms, and there was no language included in the statement about allowing gun owners who currently own those weapons to be able to keep those weapons. If gun owners are not allowed to keep those specific semi-automatic firearms under a Biden ban, that would effectively amount to a mandatory gun confiscation-type program.

Bump stocks — the gun add-ons that can dramatically increase their rate of fire — are now officially illegal in the U.S., after a Trump administration ban took effect Tuesday. Anyone selling or owning bump stocks could face up to 10 years in federal prison and a fine of $250,000 for each violation. …

The ban requires any bump stocks to be destroyed or turned in to law enforcement authorities. The Bureau of Alcohol, Tobacco, Firearms and Explosives has even posted instructions and diagrams showing how to destroy one of the devices and satisfy the new ban.

“In fact, no bump stocks will be ‘grandfathered in,’” as NPR’s Martin Kaste reported last month. “The new federal rule reclassifies them all as ‘machine guns,’ no matter when they were purchased, and owning one will become a felony.”

Biden’s call on Congress to enact legislation that would strip gun manufacturers of immunity from lawsuits who “knowingly put weapons of war on our streets” is essentially a backdoor way of trying to bankrupt the gun industry or force them to drastically change the types of weapons they are willing to sell.

When gun control activists use the term “weapons of war,” they are generally using it in such a way as to portray the weapons that they want to ban as “weapons” that are used in “war,” as in used by militaries. However, this is inaccurate because the types of weapons that gun control activists are referring to, usually AR-15-style rifles, are not used in war. The variants of those rifles that are currently sold by gun manufacturers in the U.S. are semi-automatic firearms, not the fully automatic versions that are used by military.

Approximately one out of every three Americans own a firearm, nearly half the country lives in a household where firearms are present, and there are more firearms than people in the United States. Gun sales smashed all-time records last year amid the pandemic and violent riots that broke out in major U.S. cities, which are largely run by Democrats. Nearly five million Americans bought a firearm for the very first time last year.

Civil unrest has served as a prime driver of gun sales during the coronavirus pandemic, as Americans buy firearms for self-protection. Federal background checks for gun purchases surged 40% to a record 39.7 million in 2020, according to the Federal Bureau of Investigation, while gunmakers Smith & Wesson and Sturm, Ruger RGR +0.1% reported double-digit increases in sales.

Statistician Leah Libresco wrote in The Washington Post following the Las Vegas shooting that she used to think that gun control was the answer to reducing gun violence, but that her research eventually proved otherwise.

“A reduction in gun deaths is most likely to come from finding smaller chances for victories and expanding those solutions as much as possible,” Libresco concluded from her statistical research. “We save lives by focusing on a range of tactics to protect the different kinds of potential victims and reforming potential killers, not from sweeping bans focused on the guns themselves.”