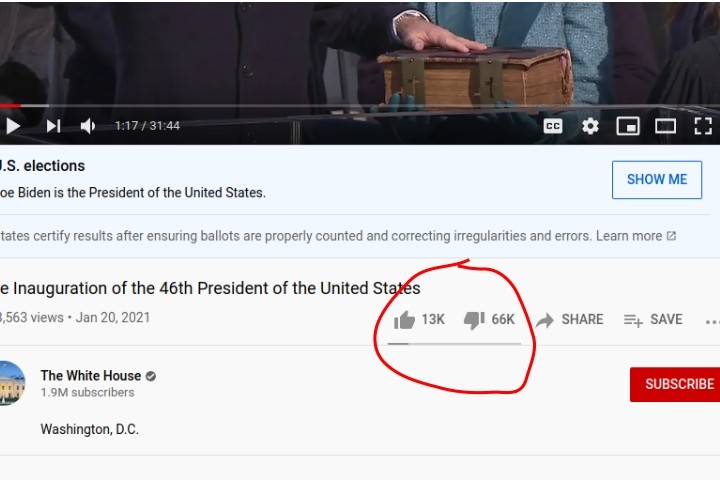 If you go strictly by the numbers, new president Joe Biden, having supposedly garnered 81 million votes in the November election, should be the most popular president in American history — and by a wide margin. Unfortunately, his analytics on one social-media platform — YouTube — are telling a different story.

YouTube, the video-sharing service owned by Google, gives users the opportunity to give either a “thumbs up” or “thumbs down” on each video posted to the site. In the first few days of President Biden’s administration, the supposedly wildly popular president’s videos are receiving thumbs down by a four-to-one margin over thumbs up.

Since the new administration took over the official White House YouTube channel on Inauguration Day, January 20, the site’s administrators have posted 14 videos as of this writing. Each of those videos has significantly more dislikes than likes. This is odd for a brand new president who is supposedly the most popular president in history, at least by vote count.

As of this writing, the number of thumbs up for thirteen videos featuring Biden and staff members number is only 71,000. The thumbs down number more than 313,000. The most viewed video thus far is the first one, with more than 730,000 views. It features President Biden and Vice President Kamala Harris being sworn in to office, and so far has received 13,000 likes compared with 66,000 dislikes.

By way of comparison, a 23-second video of Donald Trump thanking law enforcement at the southern border, which was posted last week, has received more than 32,000 thumbs up compared with 4,000 dislikes.

It’s easy and quite possibly correct to blame the wide disparity between dislikes and likes for Biden’s videos on disgruntled Trump supporters who are still feeling cheated out of an election they firmly believe they won. But if President Biden is so incredibly popular as to have received 81 million votes in November, shouldn’t those angry Trump supporters be drowned out by the new president’s admirers?

Biden’s official Facebook and Twitter accounts don’t allow users to dislike content, so those pages are thus far unaffected by any measurable dissatisfaction. However, a quick perusal of the comments on Biden’s posts show a country widely divided, with many posters quite unhappy with the new resident of 1600 Pennsylvania Avenue.

Of course, this type of evidence of the new president’s likability (or lack thereof) is purely anecdotal — a brief snapshot of disgruntled and angry members of our society. After all, the mainstream media is completely fawning over Biden and the new direction in which he’s taking America.

MSNBC’s Chuck Todd labeled him “the better angel president.” CNN’s David Chalian gushed that the lights on the National Mall’s reflecting pool were like “extensions of Joe Biden’s arms embracing America.” MSNBC’s Joy Reid touted the “love story” between Joe Biden and wife Jill, saying, “It’s a wonderful story, and we haven’t had a love story in the White House in four years.” Byron Pitts of ABC News called Joe the “papa in chief.”