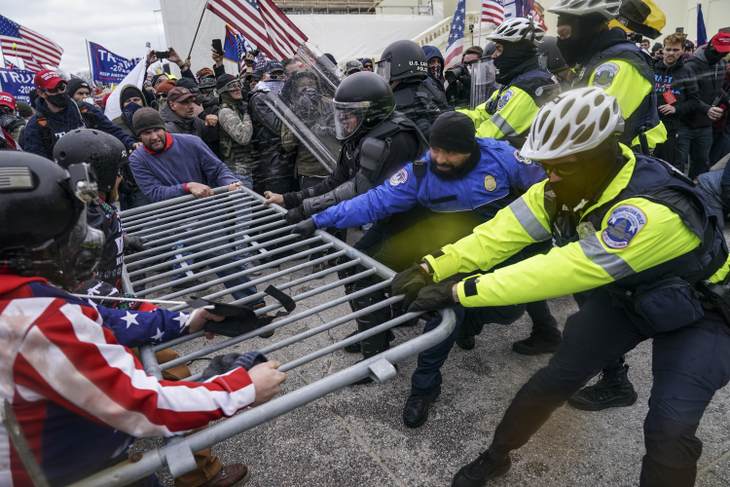 Isn’t it remarkable how well order can be maintained when a clear desire to have it so is manifested?

President Biden’s inauguration went off without even a hint of the violence seen a week earlier, when zealous but misguided Trump supporters broke into the Capitol in what has been widely but erroneously, often hysterically, described as an “insurrection.” But even if one accepts the term’s current usage, how refreshing it is to see an instance of violent opposition to law and order receive such universal disapproval.

How welcome it is to hear the half-wits on cable television and even Nancy Pelosi express their appreciation for the police. Yes, after a season of rioting in cities across the land following the death of George Floyd, all of which was excused, ignored, or euphemized as “mostly peaceful protests” by our sophisticated betters in government, the media, and academia, the Left has finally found a riot it can condemn, with all its MAGA hats and American flags and, of course worst of all, white people.

It is at this point that the prudent conservative writer, aware of the ongoing effort to cancel people of his benighted sort, is compelled to offer a statement of principles. Here are mine, as they pertain to the current political climate. I believe:

Simple, right? It wasn’t so long ago that nearly everyone could agree on these rules, but recent events and the demands of electoral politics have inspired a previously unimaginable elasticity of principle in some quarters, most conspicuously among those same sophisticated betters in government, the media, and academia, who were aghast at the sight of federal officers defending against the nightly siege of the federal courthouse in Portland, but who welcomed, temporarily, 25,000 troops brought in to protect Biden’s inauguration.

Yes, the double standards have been on vivid display since Jan. 6. As further proof of this, consider a counterfactual: Donald Trump has won the election by a slim margin, and some of Joe Biden’s supporters have raised questions about the legitimacy of the vote-counting in certain states. Their objections are rebuffed in the courts, and when Congress meets to certify the electoral votes, a crowd of protesters gathers outside the Capitol, encouraged by Democratic politicians and talking heads on cable news. Some smaller number of those protesters breach the security perimeter and force their way into the Capitol, sending the occupants scurrying for safety. In the chaos that follows, a black woman protester is shot and killed by a police officer as she climbs through an interior window near the House chamber.

As it happened, Ashli Babbitt, who was shot and killed by a Capitol police officer without any apparent legal justification, has been largely forgotten in the wake of this so-called insurrection. Her death is a mere parenthetical to the story. Why?

Also largely forgotten is Brian Sicknick, the Capitol police officer who died after leaving the melee at the Capitol and returning to his office. The cause of Sicknick’s death and the circumstances of any altercation he may have been involved in have not been made public, though the FBI is reported to be investigating his death as a homicide.

We are told, again by these same sophisticated betters, that the insurrection was incited by Donald Trump, who propagated the “lie” that the election had been stolen from him and who encouraged his supporters to continue to protest on his behalf. But was Trump really “lying,” or was he merely espousing an honestly held belief, albeit one unsupported by available evidence?