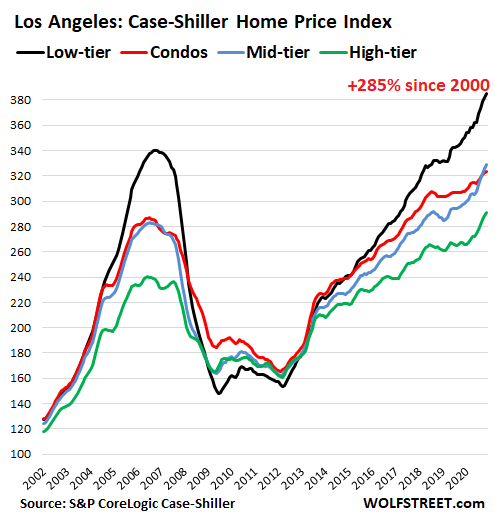 We’re not talking about miracles, such as the same house getting bigger somehow or fancier, but about how many dollars it takes to buy the same house. According to the National Case-Shiller Home Price Index for October, released today, it takes 9.5% more dollars than it took a year ago to buy the same house, meaning that the US dollar has lost purchasing power by that much with regards to houses. This watering down of the dollar is the purposeful result of the Fed’s interest rate repression and the $3 trillion it printed and handed to the markets, which triggered, among all kinds of other peculiar phenomena, a land rush.

The Case-Shiller Index for house prices in the Los Angeles metro rose by 0.9% in November from October and by 9.1% year-over-year, with prices now exceeding the peak of the insane Housing Bubble 1 by 15.1%. The index was set at 100 for January 2000 across the 20 cities it covers. So the index value for Los Angeles of 315 indicates house prices in the metro have surged by 215% since January 2000 – meaning they more than tripled in 20 years – thereby making Los Angeles the most splendid housing bubble on this list. 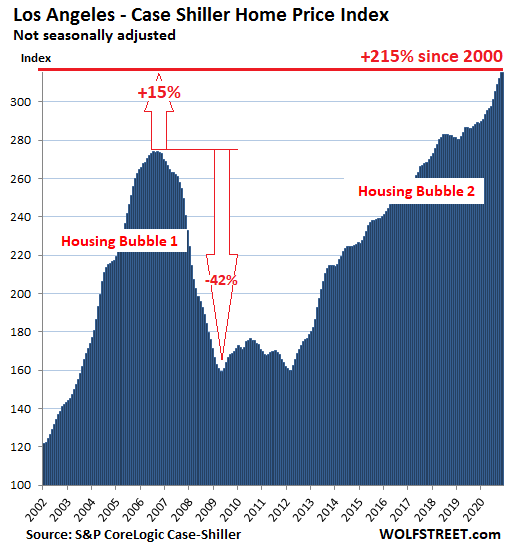 For Los Angeles, along with a few other cities, the Case-Shiller Index provides not only an index for house prices, but also separate indices for prices of condos, and high-, mid-, and low-tier houses. In Los Angeles, they have diverged, with prices of houses in the low tier (black line in the chart below) nearly quadrupling since 2000 (up 285%), and with houses in the high tier (green) surging the least. Condos (red line) are in the middle.

Today’s release of the Case-Shiller Index, “November,” is a rolling three-month average of closings that were entered into public records in August, September, and October.

This is “House-Price Inflation.”

By comparing the sales price of a house in the current month to the price of the same house when it sold previously, the Case-Shiller Index tracks the amount of dollars it takes to buy the same house going back decades, thereby measuring the purchasing power of the dollar with regards to houses. This “sales pairs” method (here is the methodology) makes the Case-Shiller Index a measure of “house-price inflation.” 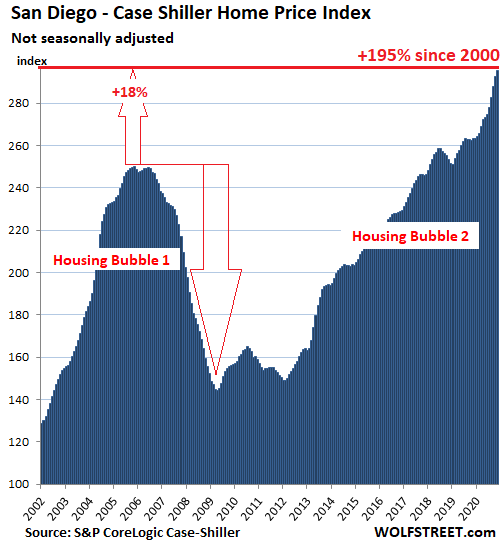 The Case-Shiller Index for “San Francisco” covers the Bay Area counties of San Francisco, San Mateo (northern part of Silicon Valley), Alameda and Contra Costa (East Bay), and Marin (North Bay). House prices rose 0.6% in November from October and were up 8.3% from a year ago. The index has nearly tripled since 2000 and is up 51% from the crazy peak of Housing Bubble 1: