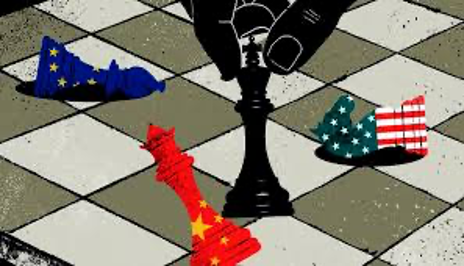 For many years, a handful of people have postulated that those who control industry, finance and governments are essentially the same people – a cabal of sorts that have, over generations, solidified their relationships in order to gain greater wealth and power, whilst systematically making things ever more difficult for the free market to exist.

But why should this be? Surely, corporate leaders are more ardently capitalist than anyone else?

Well, on the surface, that might appear to make sense, but once a significant position of power has been achieved, those who have achieved it recognize that, since they’ve already reached the top, the primary concern changes. From then on, the primary concern becomes the assurance that no others are able to climb so high as they have.

At that point, they realise that their foremost effort needs to be a push toward corporatism – the merger of power between government and business.

This is a natural marriage. The political world is a parasitic one. It relies on a continual flow of funding. The world of big business is a study in exclusivity – the ability to make it impossible for pretenders to the throne to arise. So, big business provides the cash; government provides protective legislation that ensures preference for those at the top.

This corporatist relationship has deep roots in the US, going back over one hundred years. To this day, those elite families who took control of oil, steel, banking, motor vehicles and other industries a century ago, soon created a takeover of higher learning (universities), health (Big Pharma) and “Defense” (the military-industrial complex).

Through legislation, the US was then transformed to ensure that all these interests would be catered to, creating generations of both control and profit.

Of course, “profit” should not be an evil word, but under crony capitalism, it becomes an abomination – a distortion of the free market and the death of laissez faire economics.

Certainly, this sort of collectivism is not what Karl Marx had in mind when he daydreamed about a workers’ paradise in which business leaders retained all the risk and responsibility of creating and building businesses, whilst the workers had the final word as to how the revenue would be distributed to the workers themselves.

Mister Marx failed in being objective enough to understand that if the business creator took all the risk and responsibility but gave up the ability to decide what happened to the revenue, he’d never bother to open a business. Even a shoeshine boy would reject such a notion and elect to go on the dole, rather than work.

Mister Marx sought more to bring down those who were successful than to raise up those who were not, yet he unwittingly created a new idea – corporate collectivism – in which the very people he sought to debase used the appeal of collectivist rhetoric to diminish both the freedoms and wealth of the average worker.

On the surface, this might appear to be a hard sell – to get the hoi polloi into the net – but in fact, it’s quite easy and has perennially been effective.

Hitler’s New Order was such a construct – the promise to return Germany to greatness and the German people to prosperity through increasingly draconian laws, warfare and an economic revolving door between government and industry.

Of course, a major influx of capital was required – billions of dollars – and this was eagerly provided by US industry and banks. Heads of New York banks not only funded Nazi industry; families such as the Fords, Rockefellers, Morgans, etc., sat on the boards of German corporations.

The Nazi effort failed, as they underestimated the Russian will to fight to the death. (Eighty percent of all German Army deaths were due to the Russian campaign.)