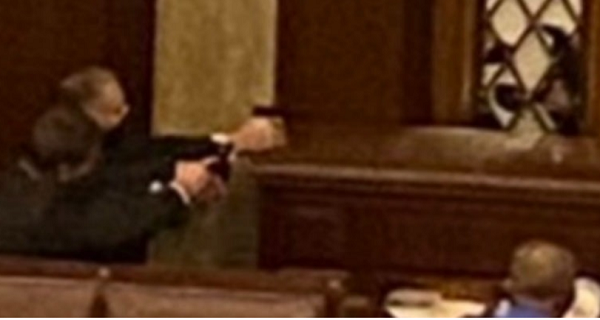 One of the “Trump supporters” who was spotted at the Capitol on Jan. 6 turned out to not actually be a Trump supporter at all, but rather a radical left-wing activist who was there to frame the president and his supporters.

John Sullivan was seen in a photo wearing a “President Trump 2020: Keep America Great” hat in the hallway of a hotel, which was enough “proof” for the mainstream media to declare him a Trump supporter. As it turns out, however, Sullivan is the founder of a far-left domestic terrorist group known as Insurgence USA.

Sullivan also just so happened to be present at the time Air Force veteran Ashli Babbit was shot to death by police inside the Capitol building. Sullivan actually filmed the shooting as it happened.

Just before the “siege,” Sullivan snapped the photo of himself wearing the Trump hat along with the caption: “counter-intel.” In other words, Sullivan admitted before the incident that he was planning to pose as a Trump supporter to fulfill the false flag narrative that Trump supporters committed “insurrection” against our nation.

Were there real investigative journalists working at fake news outlets like CNN and MSNBC, Sullivan’s name, photo, and information would have been plastered all over the television as a far-left infiltrator who tried to frame Trump and his supporters as the culprits. Instead, they all capitulated to the lie that “Trump supporters” stormed the Capitol building and knocked over a few things – oh, the horror!

By the time Sullivan made it inside the Capitol building, he had already stripped himself of all Trump regalia. At that point, he was just an uncover Black Lives Matter (BLM) terrorist who was up to no good.

“John Sullivan witnessed the lady get shot as they were one of the first trying to get into the Capitol through a door,” tweeted someone named Brian Murphy, along with a clip of Sullivan’s appearance on CNN.

“Why was the founder of Insurgence USA among the leaders of those insurging? Doesn’t sound like a Trump supporter…”

According to the Insurgence USA website, the purpose of the group’s existence is to fight “police brutality.” It also exists to “empower and [uplift] black and indigenous voices.” This does not sound like a Trump supporter.

Hilariously, Sullivan was not wearing a mask during his Capitol invasion, which some probably assumed automatically made him a Trump supporter. In reality, he is a leftist hypocrite, seeing as how the left worships the almighty mask while denigrating all who refuse to wear it.

“Activist John storming the Capitol maskless and standing over a woman and recording her bleed to death is weirdly unsurprising,” tweeted another user named “Dublin.”

As it turns out, Sullivan also had violent intent. He is quoted as saying that he wanted to “rip” the president out of office on Jan. 6, even though the president was not actually inside the building. Later, Sullivan changed his story to claim that he was present at the insurrection solely to “document” it.

Sullivan also told Fox News that he regularly attends protests, including BLM protests, supposedly to keep an eye on everything that takes place in order to show it to the world.