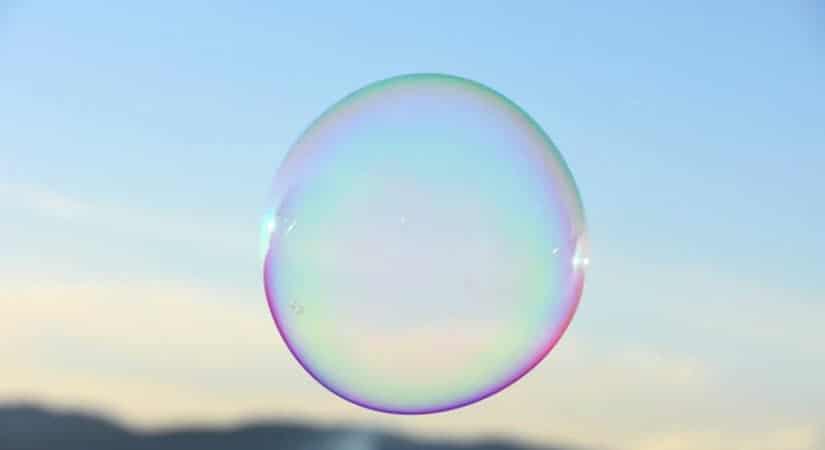 Wealthy investors like Warren Buffett have issued disclosures in the past that ended up signaling major market shifts ahead of time.

Other wealthy investors have warned about macro-trends in the U.S. economy, and still others have warned about specific trends that could have an impact on investors. According to a recent E-Trade survey, 91% of investors with portfolios of at least $1 million think the market is approaching or at least somewhat in a bubble.

As alarming as that insight alone may be, what seems more alarming is how potentially detached from reality the stock market’s reaction to that news is. Just take a look at the upward trend of the Dow Jones Industrial Average: 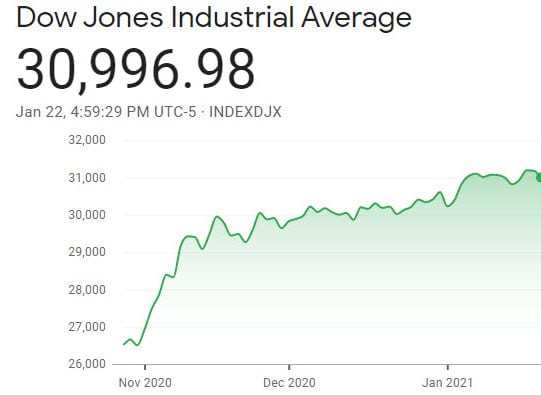 “There is a broader recognition of an economy that is improving and signs that the factors are in place for the market to move higher,” said Mike Loewengart, chief investment officer at E-Trade Financial’s capital management unit.

For example, on Tuesday the markets rallied almost solely on news surrounding Biden’s inauguration, according to a CNBC article:

The stock market rallied to a record close as President Joe Biden was sworn into office, sparking hopes for another stimulus package and smoother vaccine rollout ahead.

Of course, this is only one example of how the market specifically moves and seems detached from the reality of a potentially inflated bubble, as 91% of the investors in the survey think:

Despite this, the same survey reveals 64% percent of millionaires are bullish (up 9% from Q4 2020), even more than the mere 57% of the broader investor universe that remains bullish.

You might be thinking that if someone who is wealthy catches wind about a market bubble, they wouldn’t be so bullish. But that doesn’t appear to be the case…

“I think the path of least resistance… is still up,” Mohamed El-Erian, chief economic adviser at Allianz, recently told CNBC. They see at least a temporary opportunity for short-term gain, which we might call the “push your luck” strategy of investing. Even so, millionaires are moving out of the riskiest asset classes into less-overvalued sectors.

But it’s not just wealthy investors who are supporting this overinflated market. Boredom might be playing a role in this financial disconnect from reality.

How “boredom” could be causing a bubble

During the early stages of the state governor’s responses to mitigate spread of the coronavirus, various forms of public gathering were stopped.

Some of those gatherings involved entertainment like sports. Absent those, many people flocked to the only “casino” that was open:

People got bored in their coronavirus-related lockdowns, and they couldn’t bet on sports because sports were canceled, so they turned to betting on stocks as a form of entertainment, not investment or financial analysis. The stock market is a casino that happens to still be open.

The free stock trading app Robinhood has become the new millennial lockdown hobby; just before it stopped reporting customer trading totals, in June 2020, Robinhood reported more monthly trades than Charles Schwab and E-Trade combined. Even some Reddit posters got in on the action.

But once the entertainment options return, and public gatherings are allowed again, any inflation of the current market bubble from these investments could evaporate. In the words of a Bloomberg article, “It may not end well.”

Is this our “shoeshine boy” moment?

Do you know the story about JFK’s father Joe Kennedy and the shoeshine boy?

You know it’s time to sell when shoeshine boys give you stock tips. This bull market is over.

If the stock market is already in a bubble, and even the wealthy investors are taking risk off the table, and our modern shoeshine boys of Robinhood and Reddit are propping up the market… Well, the bubble could pop at any time.

Make sure your retirement isn’t built entirely with “paper”

Remember Warren Buffet’s famous axiom: “Be fearful when others are greedy.”

Ask yourself, do you want your savings to consist solely of “paper?” By paper, we mean specifically assets with no intrinsic value – promises to pay, IOUs from governments or companies and stock certificates whose values only last as long as the issuing corporation.