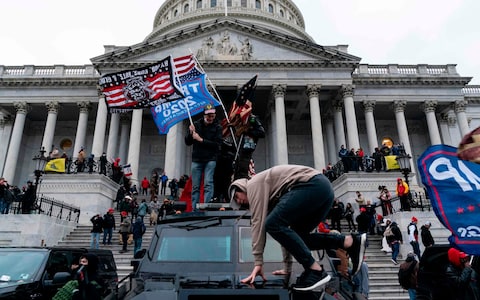 The Democrats will do whatever is necessary to take away our guns.

Everyone saw how they hijacked the January 6th Capitol storming to demonize the Patriot Movement.

That was their planned “Reichstag fire” that will be used to further consolidate their power just as Hitler did in 1933.

Now the Democrats will use Inauguration Day events to carry out false flag attacks in those states where gun removal is their highest priority.

How easy is it for AntiFa terrorists or BLM mercenaries to dress up like armed Patriots and show up in any state capitol?!

Everything points to the great likelihood that false flag attacks will be conducted on January 20th in those states most controlled by the Democrat Party.

These false flag operations can take the form of a false flag mass shootings, bombings or other acts of “shock and awe” destruction.

Because both federal and local law enforcement always fully support these Gladio black operations, Patriots caught anywhere near the Democrat crimes scene will be automatically guilty.

Of course, the mainstream media will tar and feather the entire Patriot Movement because the Anti/BLM perpetrators will be disguised as Militiamen, Oathkeepers, Proud Boys or other activist groups on the Right.

The bottom line is that the Left, because the Democrats will soon control all 3 branches of the U.S. Federal Government, practically own and operate the public spaces by remote.

Yes, a Republican governor can exert their influence, but the Democrats will avoid those states where they don’t exert total control over their false flag attack crime scenes.

There’s really no reason for Patriots to show up in the Florida capitol, for instance, with a fiercely patriotic governor like Ron DeSantis.

So, folks ought to especially stay away from GOP-run states on Inauguration Day.  Yes, there are many RINO’s in power, but their political careers are over after their betrayal of Trump.

KEY POINT: The following FALSE FLAG ALERT was posted by SOTN days before the Capitol storming that was led by AntiFa extremists and agents provocateur planted by the U.S. Intelligence Community.  Any Patriot who plans on showing up armed at any state capitol on Jan. 20 ought to prepare by first reading this: Beware of Agents Provocateur.

SPECIAL NOTE: It’s imperative that Patriots in every state know about this FALSE FLAG ALERT. Many folks are not on the Internet OR they’re out working two jobs to makes ends meet because of the Covid lockdowns.  Please get this urgent notice to them asap — however that happens — they need to know not to walk into an ambush at the state capitol.  These Democrat bolsheviks, Antifa terrorists and BLM mercenaries have gone stark raving mad with TDS.  Anything goes on January 20th.  SOTN much appreciates all who send this dire warning out everywhere the Patriot Movement can be found.